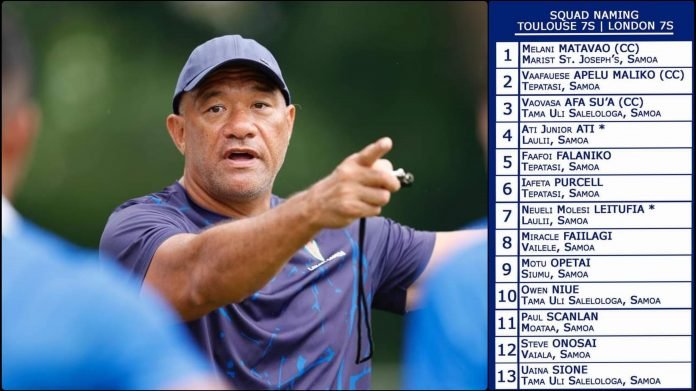 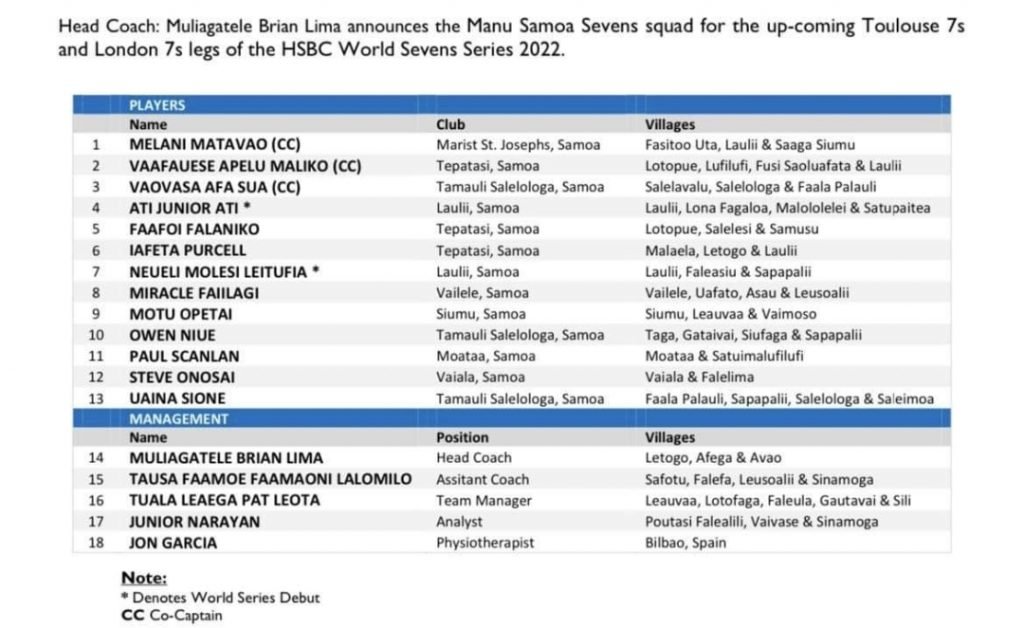 Two debutants have been named in the squad.

In the forwards Muliagatele has opted for 20-year-old Ati Junior Ati, one of two replacement players who had recently travelled from Samoa to join the team in Dubai. Ati was one of the star players for Laulii Lions during their 33rd Vailima Marist 7s win last year. Muliagatele said young Ati Junior Ati has trained well with the team since arriving in Dubai and has attained the fitness level required for selection.

“Ati is a strong runner who will provide good back-up support to Vaa, Uaina and Vasa,” said the Head Coach.

Muliagatele is referring to the forwards trio that led Samoa to back-to-back quarter finals: Co-captains Vaafauese Apelu Maliko from Tepatasi, and the pair from Tama Uli – Vaovasa Afa Su’a and Uaina Sione.

The other debutant is Neueli Molesi Leitufia, playmaker for Laulii Lions who will cover Melani and Paul Scanlan in that role.

“We saw in the last two legs with yellow cards and injuries that we needed to cover this important position”, said Muliagatele in response to questions from SGN.

The Head Coach said the inclusion of the two debutants,  Ati and Neueli, is part of the build-up for the Manu Samoa 7’s team into the future.

“We want to give these a guys a chance to taste the level of HSBC and be exposed at this level of competition,” said Muliagatele, “that’s the best way to develop the side for the future..”

Asked about the second player who had travelled to Dubai, Muliagatele said Malo Luteru is a talented player with a lot of potential. “Going forward, Malo definitely has a place in the squad in the future..”

Asked how the team’s preparations are going Muliagatele said they went back to the drawing board to assess what they did right and what they could have done better.

“We’ve had a good hard look at ourselves and the areas that need to be improved..

“The players participated in the review sessions and they’ve taken ownership of what they need to work on,” said the head coach, “and also the positives.. the things that worked well that we need to keep doing more of..”

Muliagatele said his players especially the debutants in the Manu Samoa 7’s were unknown in the past two legs but that element is no longer there.

“We’re exposed now and the other teams will be analysing us.”

Fans will get to watch the exciting backline led by Co-captain Melani Matavao with Steve Rimoni, Owen Niue, Paul Scanlan and Faafoi Falaniko, all renamed in the squad.

Samoa is pooled with top-of-the-table South Africa, 5th placed Ireland and 9th placed Spain for this weekend’s tournament in Toulouse.

Locally in Samoa, you can catch all the action of the HSBC World Sevens Series on Digicel TV, or TV1 Samoa.