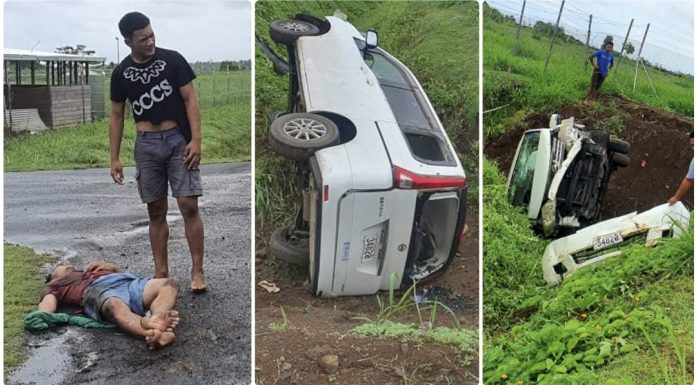 A youth in his 20’s speeding along the stretch of road near Faleolo International Airport on Saturday afternoon lost control of his vehicle and drove it into a ditch near the road. He walked out of the car having escaped serious injury, only to be knocked out cold by his older brother.

He then regained consciousness, looked to have recovered and was taken away by police. 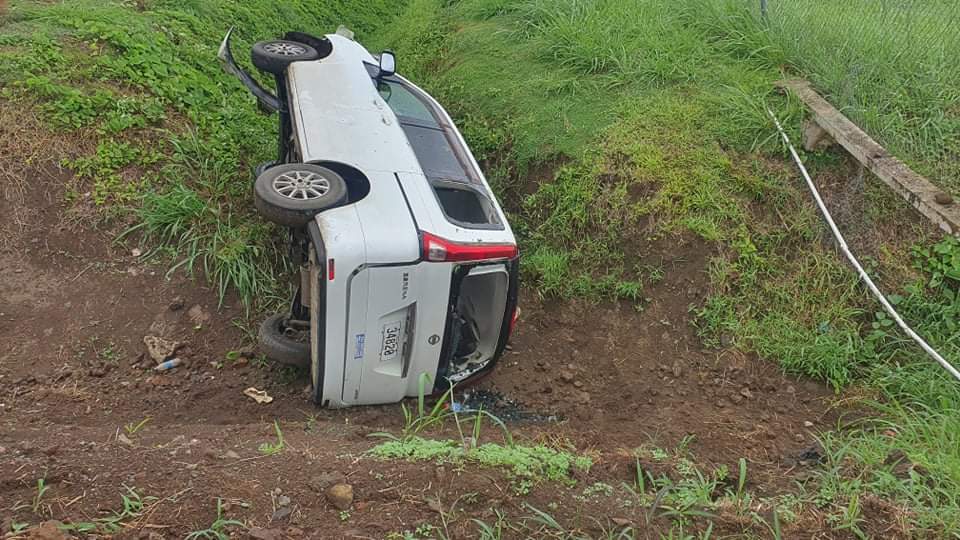 A witness driving towards Faleolo Airport said the driver was speeding and looked to have lost control of the vehicle.

“He was heading towards us and we could see him desperately trying to control the wheel..

“The car started swerving on the road and we slowed down hoping he wouldn’t hit us..

“We were lucky the car then drifted off the road away from us, flipped over and landed in the ditch..”

Witnesses said they could see the man hitting the windscreen from inside the vehicle, trying to find a way out.

“Other youth who knew the driver ran along the road towards the car. They rushed in, broke the car windows and let the driver out..

“They must have been drinking nearby because these youth who ran over, they all knew the driver, and all of them were drunk..

They had walked for about 100 metres when suddenly his brother took a swing and punched him.. the driver of the vehicle fell flat on the ground, knocked out.

An elderly man and his wife driving by stopped to help, and was heard telling off the older sibling for punching his brother.

“Dont worry, he’s my brother. I had to punch him because he crashed the car,” he explained to the crowd that gathered around. (“Aua le popole, o lo’u uso. Kakau a ga fasi leaga ua lavea ai le kaavale”)

SGN was on the scene and helped an elderly couple to turn the knocked out driver onto his side.

However, he soon regained consciousness, and stood up again.. just in time for the police to arrive and take him away.

When the police arrived, witnesses told them the pair had been involved in the accident they were responding to. The driver of the vehicle was pointed out to police.

The police officer calls out from inside the double cab police truck, “Then jump in, sole,”. (“Ia, oso i kokogu sole”).

The youth cooperates. Opens the back door of the police truck himself, jumps inside and looked relieved to be taken away by the cops.

Police say they took the driver to the hospital, but he faces charges of negligent driving, driving under the influence of alcohol, and driving without a license.

First responders from the Samoa Police Service as well as the Samoa Fire and Emergency Services Authority have sent out several community messages urging the public to enjoy the festive season responsibly.