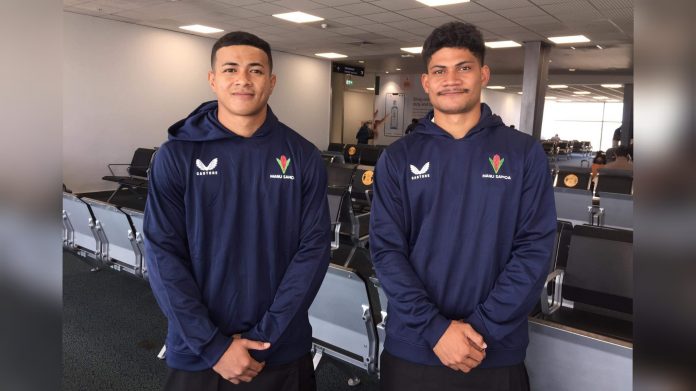 Monday 2 May 2022, Apia Samoa.  Samoa Sevens Head Coach Muliagatele Brian Lima has called up two local players to join his squad in Dubai ahead of the Toulouse and London legs of the HSBC World Series.

The Manu Samoa 7’s squad of 20 players who left Samoa four months ago on the 1st of January this year, have been camped in Dubai as the only practical way to be able to participate in the world series given covid-19 travel restrictions. The squad lost 5 players, all overseas-based, who opted to leave the training camp in March ahead of Singapore and Vancouver.

Malo Luteru and Ati Jnr Ati are both just 20 years old. They both represented Samoa in the Under 18’s, and have both been called up as replacements by Head Coach Muliagatele Brian Lima, who tells Samoa Global News the pair have been selected based on their performances in the recent Vodafone National Sevens Series.

Muliagatele says he and his Assistant Coach, Tausa Faamaoni Lalomilo, have been able to watch local players’ performances on TV3’s livestream coverage of the local competition.

“There are many impressive up-and-coming players in Samoa, and for our developing squad, Tausa and I have decided to try as much as we can to keep the young ones coming through, because they suit the team culture we are building up,” said Muliagatele.

“The more local players we can expose to the international level, the better for local sevens development..”

Muliagatele said Malo Luteru was selected for his ability to cover all positions in the backline. “Malo is a player who can cover halfback, first five, second and wing.. the kid can play any position in the backline,” said the head coach.

“With Ati, we needed a forward to complement our current squad, especially for high balls and to recover possession in the kick-offs, and Ati has also proven himself from what we’ve seen.”

Responding to SGN from Auckland airport before their flight departed for Dubai on Monday afternoon, the pair said they were thankful to God for the opportunity to represent Samoa and were still pinching themselves because the call-up is definitely a dream come true for them.

Son of Vao Ati Tui Tuivasa and Filipa Kalolo Amani, Ati says he was shocked to get the call and in fact, it brought him to tears.

“I cried. This is what I was dreaming of, to make the sevens squad.. So yes, praise and thank you to God,” said Ati.

The Avele graduate says he can’t wait to hit the world stage, but he keeps grounded and motivated when he thinks of his parents, and also his siblings. “I have four sisters and two brothers, and I play for my parents, and for all of them.”

“I’m grateful to Laulii Lions club, the coaches and all the supporters, I hope to work hard and make the most of this chance.”

Malo Alani Luteru was emotional when he said goodbye to his father who is not altogether well healthwise. Malo is the son of Luteru and Mamele of Uafato, Fagaloa. Tagged by SGN in 2021 as “one-to-watch” Malo graduated from Leifiifi College in 2020 and plays his rugby with the BBE Vaiala Ulalei club.

His club coaches have described the youngster as, “a dangerous speedster and ankle breaker” for his “electric quick feet and linebreaks.”

But Malo says he is humbled by the chance to serve Samoa, and to further his talent.

Malo is close with his EFKS faifeau, Rev Elder Asotasi Gu Time, who has served in Uafato since 1991 and has been the youngster’s spiritual father since he was born. Rev Elder Asotasi’s late son, Isamaeli Time, was a mentor to Malo, and brought him to Vaiala.

In preparation for his trip Malo Luteru thanked Bruce Leiataua of Tanoa Samoa for his generosity in helping him with gears.

The latest additions to the Manu Samoa 7s, will bring the total squad camped in Dubai to 16 players, as Indiah Saotui-Huta has returned to New Zealand for family reasons.

Malo and Ati will get the chance to train with the squad for two weeks before the next HSBC leg in Toulouse, France scheduled for 22-24 May, followed by London on the 28-29 May.

Malo and Ati’s 19-hour flight from Auckland to Dubai left at 5:30pm on Monday 2nd May, and they are in the air as this article goes to print.