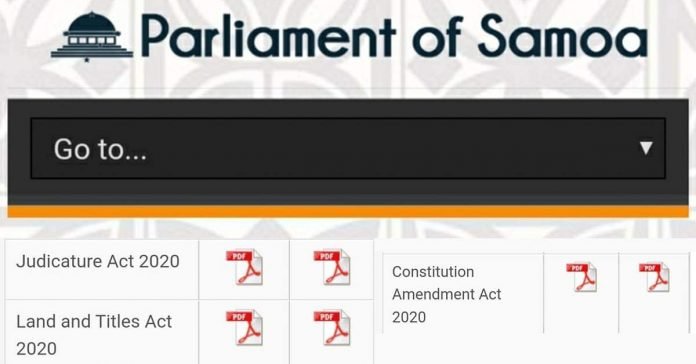 After months of controversy, debates and a nation-wide consultation by a Parliamentary Committee, the three controversial Bills passed by Parliament into Law on the 15th of December 2020, can now be downloaded from the Palemene o Samoa website.

Time will tell how the new Laws will impact various issues that continue to be debated such as the added powers given to the Lands and Titles Court, the structure of the Samoa Judiciary system, bestowal of matai titles, application of LTC decisions on customary land registrations, and the impact of communal rights being recognised by Law.

During the third and final reading of the Bills in Parliament, the public were not able to hear what the specific changes were, as Parliament passed each new amendment by reading out the section number, and not the subject matter.

Just one example is the new requirement that matai sa’o of families cannot be bestowed upon a person residing overseas. The wording of the new Law, under Section 13 of the LTC Amendment Act 2020, is not clear as to situations where a family have selected several matai sa’o – a most senior matai sa’o holder that is ‘domiciled in Samoa’ to uphold the duties listed in S13(c), several more domiciled in Samoa to support the senior matai, and several diaspora providing support from overseas.

The Minister of Justice Hon Faaolesa Katopau Ainuu had attempted to allayed concerns during his Parliamentary address before the bills were presented for their third and final reading on 15 December 2020. He assured the nation that individual rights would not be diluted by the formal recognition of communal rights and said the Chief Justice would still head Samoa’s Judiciary. He stated that 84% of matai and villages across Samoa accepted the changes, and gave his assurance the Judiciary would not be compromised by the added layer and independent structure given to the Lands and Titles Court.

At a recent FAST rally, Fiame stated, “One of the most crucial impacts of the 3 Bills for me, is the destruction caused to the Rule of Law..”

Fiame maintains the position previously put forth by the Judiciary and members of the Samoa Law Society that unfettered powers given to the Lands and Titles Court will open up gaps for abuse and corruption in their decision making. Fiame insists that the restructuring of the Courts will affect the strength and stability of the Rule of Law in Samoa.

The Attorney General of Samoa Savalenoa Mareva Betham-Annandale has issued several press releases in the past two weeks, clarifying various parts of the legislation, stating that the public was being misinformed by opposers of the Acts.