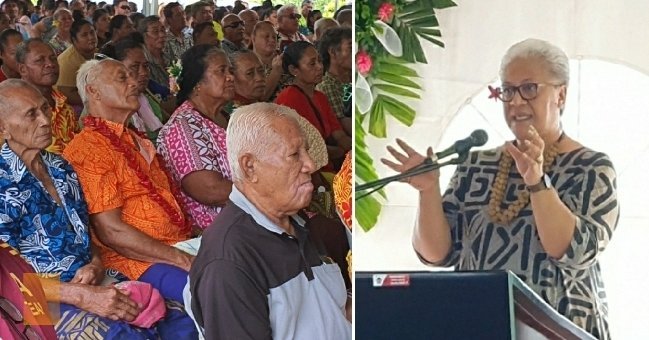 The FAST party (Fa’atuatua i Le Atua Samoa ua Tasi) national roadshow aims to host a rally in every electoral constituency of Samoa over the next few weeks, as part of its election campaign strategy as Samoa prepares for general elections in April 2021.

Literally hundreds of Faleata II voters turned up to hear the announcement of policy statements and campaign promises by Samoa’s newest political party; summarised on a neatly published pamphlet distributed to people as they arrived. 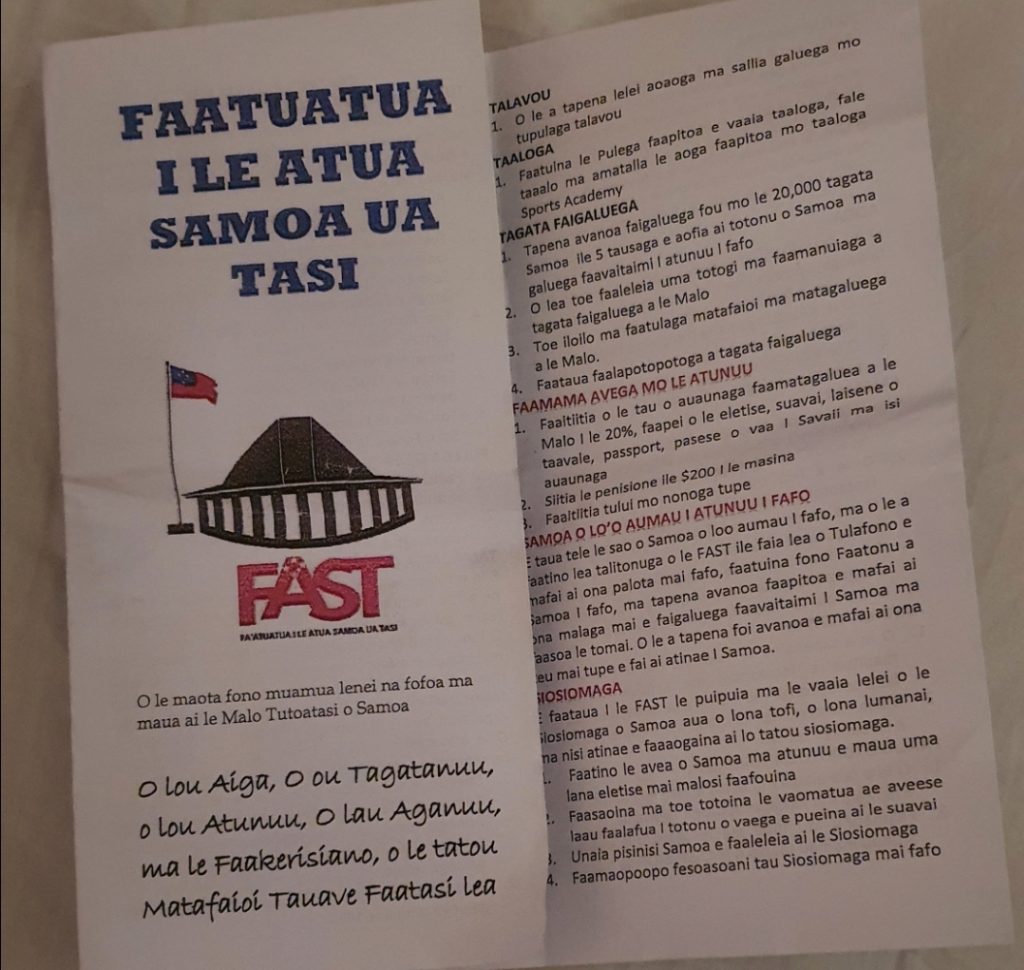 Be the Light of the World

The theme of the faifeau’s lauga was to Shine the Light Upon the World, and he encouraged FAST members to shine the light on issues he says have left the nation in disarray and uncertainty.

He quoted from the Apostle Paul’s letter to the Corinthians, and urged FAST to be united in what they say and what they do.

“I appeal to you, brothers and sisters, in the name of our Lord Jesus Christ, that all of you agree with one another in what you say and that there be no divisions among you, but that you be perfectly united in mind and thought. 1 Corinth 1:10-11

Reverend Elder Matautia called for FAST to take forth into every household of Samoa, the light of the Good News of Jesus Christ, and the message of His peace.

He told FAST members to resolve and bring together things dispersed and things that have created conflict.

The Rule of Law

Honorable Fiame Naomi Mataafa was the event’s guest speaker. The Sa’o Faapito took the theme of the preacher’s message and said this was well aligned with what FAST is setting out to do; to shed light on issues affecting the nation.

Fiame said the purpose of the roadshow and gatherings being held amongst and within communities in the coming weeks, is to clarify and shed light on current issues affecting Samoa. 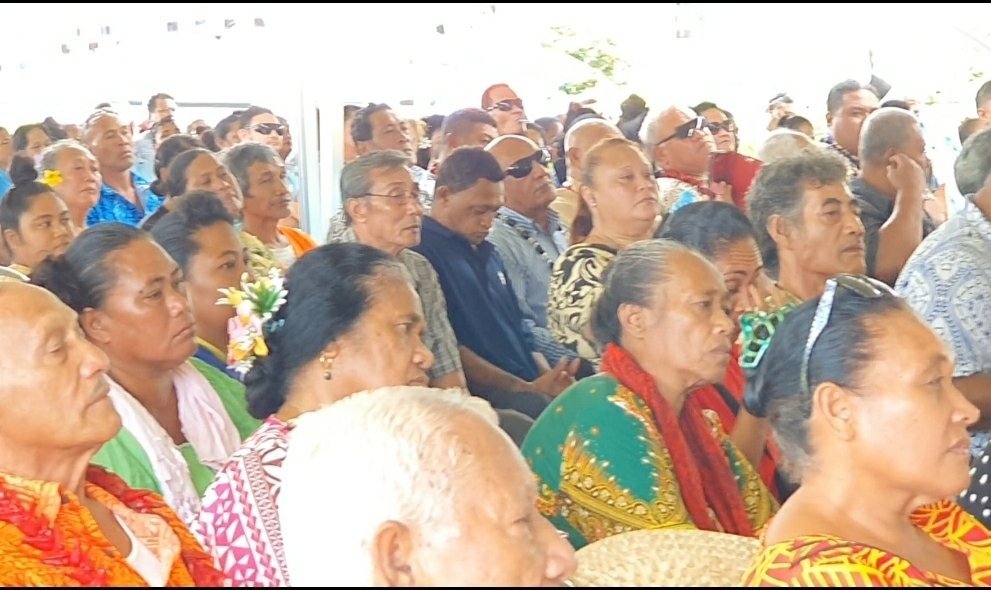 Fiame told the crowd that Samoa as a nation, at Independence, had adopted a Governance structure based on the Rule of Law.

“Our forefathers made a convenant with each other, and then all of Samoa made a covenant with God.. that this nation would be governed by Laws..’

“Laws to provide one standard for all, laws that protect all, and laws to cover all from harm”.

A Member of Parliament for over 35 years, Fiame’s articulate eloquence had the attentive crowd hanging on her every word.

Samoa’s first woman Cabinet Minister (1991) and Deputy Prime Minister (2016) then went on to summarise concerns with the LTC Bills.

“I will not speak to the details, but will speak holistically about the impacts and the consequences..

“One of the most crucial impacts of the 3 Bills for me, is the destruction caused to the Rule of Law..’ 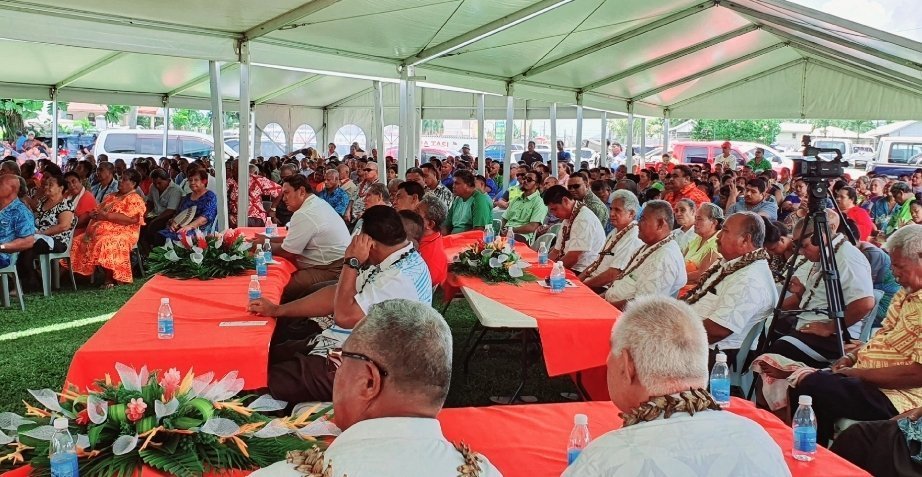 Fiame again made the point previously put forth by the Judiciary and members of the Samoa Law Society that two pillars of the Judiciary will cause uncertainty, and the restructuring of the Courts will affect the strength and stability of the Rule of Law.

Fiame said her biggest concern was that the restructure gives the Lands and Titles Court unfettered powers, and the newly enacted laws did not provide clear boundaries nor proper process and guidelines for the LTC.

Fiame said the real danger therefore sits with the implementation of the Bills; and giving too much leaway to LTC judges can allow corrupt practices to encroach the Court system.

The Attorney General as well as the Clerk of the Legislative Assembly have both issued rebuttal statements to the position and points made by Samoa’s former Deputy Prime Minister.

In terms of economic development FAST says it will launch a review into the “correct state (tulaga sa’o) of foreign debt, income and expenditure, future developments and major projects..”

The FAST manifesto states it is a concern that the economy of Samoa remains heavily reliant upon loans from International Finance Institutions and foreign aid from development partners, as well as remittances from diaspora.

FAST say they will strengthen the government tender process, and further release the implementation of economic development to the community, the private sector and to NGOs.

FAST promises to grow the economy by 20% within 5 years.

Laauli highlighted one of their strategies to set aside $51 million tala be distributed to every constituency for development initiatives.. “to support good governance, protect the environment as well as uphold the social stability of its people..”

“That is $1 million tala every year, given to communities, to implement projects… and then the next year, you get another $1 million!”, Laauli told Faleata II.

FAST says it is their intention to set aside a further $200 million tala a year to create employment by supporting growth in business and exports. The monthly pension scheme would increase to $200 and costs of services such as electricity, water, motor vehicle licensing, and ferry costs to Savaii would decrease by 20%.

An opportunity was given to the constituents to have their say and many made infrastructural requests such as additional  schools, and a new hospital for the district. There was a call to lift minimum wage, and several strong objections to plans for a Vaiusu wharf.

The feedback Q&A session went for an hour, and when last questions were being taken, hands were still going up, with so many people wanting to have their say.

Finally an opportunity was given to Leatinuu Faumuina Wayne Fong, Member of Parliament for Faleata II and 2021 FAST party candidate, to address his constituency. 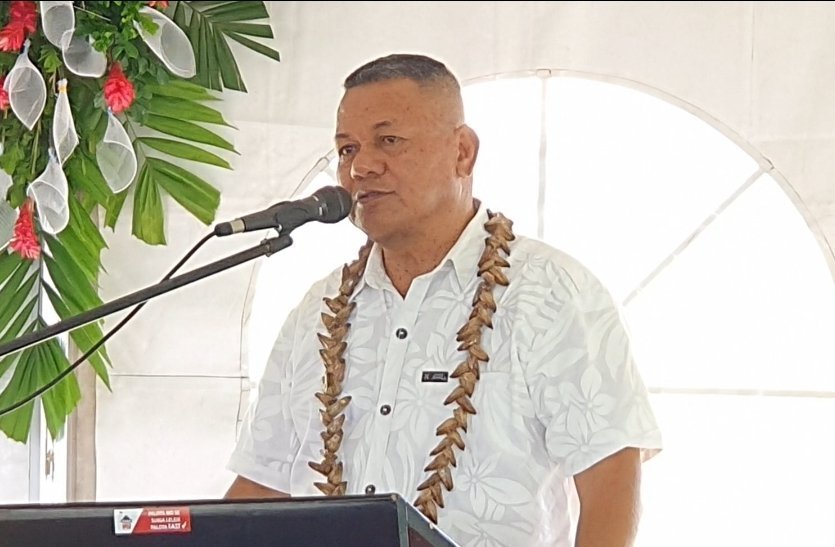 The former HRPP member thanked the constituency for voting him in as their representative and for their support in the past 4.5 years.

He called for their support for not only him but for all FAST candidates in the upcoming elections.

FAST continued their roadshow on Saturday with two sessions; one in the morning at Sataoa Primary School for the Safata I constituency, and a second at Matautu-uta Lefaga for Lefaga & Faleaseela.

For the constituency of Lefaga and Faleaseela where there are six registered candidates, Afioga Masinalupe Makesi Masinalupe is the only FAST candidate, while the other five are HRPP. 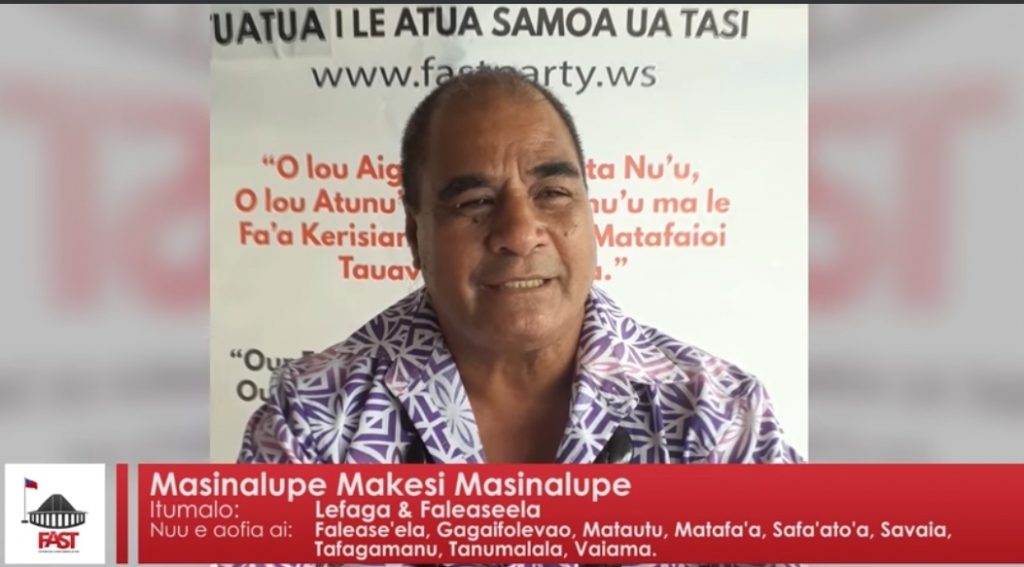 The charismatic bus operator was seen on Facebook live dancing for his constituency at the Saturday rally. He had voters laughing at his jokes and brutal honesty, as he asked for their support in the upcoming elections.