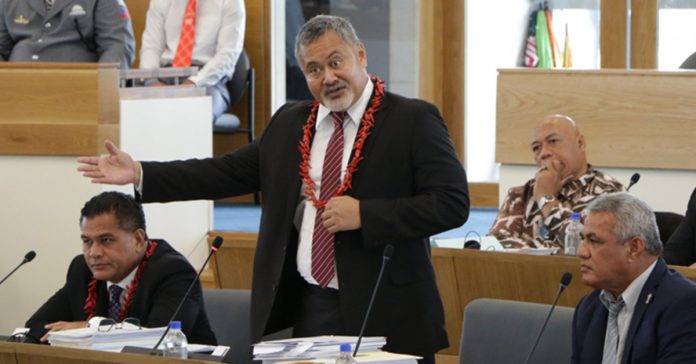 After 8 hours of debate in Samoa’s House of Parliament, the three government proposed legislation referred to as the LTC Bills (Lands and Titles Court Bills 2020) were approved by a majority of 41-4 sitting MPs this week.

In his Parliamentary address the Minister of Justice Faaolesa Katopau Ainu’u had announced that 84% of villages and matais were in support of the three bills after several months of community consultations led by a Parliamentary Select Committee.

Village councils and matais across Upolu, Savai’i, Apolima and Manono were afforded the opportunity to register their viewpoints with the Committee during its nationwide public hearings.

Many opposing views were addressed by the Minister during his opening address, prior to tabling the Committee’s findings.

Minister of Justice Faaolesa Katopau Ainu’u told the House that the country supported the amendments in the three bills according to data collected by the Committee. He said the Committee had found that 84% of villages and matai registered their endorsement while 13% opposed and 3% were undecided.

He added that while the 3% were undecided they did make recommendations to the Committee to reconsider areas such as the proposal for the number of chiefly sa’o titles limited to five as prescribed in the amendments.

The Minister of Justice said that the 13% of villages and matai who opposed the bill were unable to provide alternative options as solutions to Parliament on how to address complaints from the country pertaining to the performance by the Lands and Titles Court in recent years.

The Minister then outlined the various concerns and issued raised by those opposing the Bills as noted by the Committee, offering his explanations to address the concerns listed.

“Those who oppose the legislative amendments outright did not support the amendment to include communal rights based on their interpretation that the rights of individuals will be removed and replaced by the rights of village councils and matais,” explained Faaolesa.

“Secondly, they also noted that the new Lands and Titles Court will lead to potential conflict as their will be two Chief Justices at the helm of the Legislative Branch.”

The Minister said the Appeal Process coupled with changes of land ownership to communal lands were also cited by the opposing matais to justify their positions.

He said Samoa’s adoption of communal rights to be recognised as Law will not remove the individual rights of any citizen, as mandated by the Constitution.

“What the amendments propose is for the rights of communal leaders, village councils and matais to be recognised by law,” said Faaolesa.

“To that effect, individual rights are maintained and not removed while for the first time since our Independence, communal rights for village leaders and matais will be recognised by law,” added the Minister.

He also allayed claims that Samoa would have two Chief Justices, and reassured that the current post of Chief Justice would continue to lead the Judiciary Branch, noting that there was no reference in the new Laws to suggest otherwise.

As for the Appeal process, the Minister says that he fully agrees with former CJ Tiavaasue Patu Falefatu Sapolu that the new changes will finally see justice for families whose appeals have been delayed for years and some for a decade, noting that the process would be accountable and fair to all parties.

In terms of protection of customary lands, Faaolesa also noted that there is no proof nor any reference in the Laws to support claims that the amendments would result in changes to communal land ownership.

“That assumption is not factual and based on predictions”.

To address the multiple concerns from the Judiciary and Samoa Law Society, the Minister said the Government had established an Independent Legal Panel to ensure these concerns were incorporated into the final amendments.

He said members included a former Attorney General, a Former President of the Samoa Law Society, a former Chief Executive with the Samoa Land Reform Commissioner and a former Director of the Legal Division Commonwealth Secretariat.

“The panel’s findings are included in the amendments and had also addressed the concerns raised”.

The overhaul to the Lands and Titles Court has been under Parliament’s microscope since 2016 following a Commission of Inquiry whose report and recommendations were approved by the House in 2017.

The amendments as stated time and again by Government, is to answer the high number of complaints and grievances lodged by families questioning the performance and services of the LTC over the past several years.