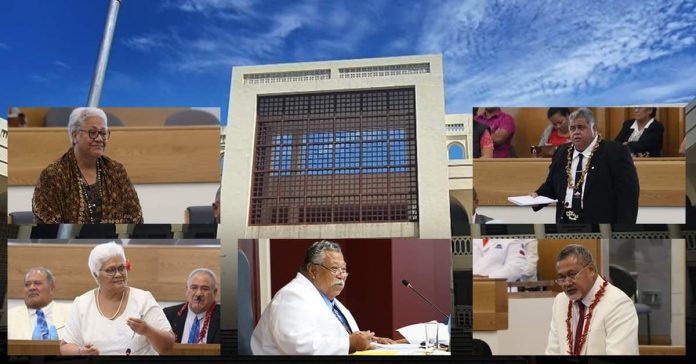 The Parliament of Samoa in its final sitting of the year passed controversial amendments to the Lands and Titles Act, the Judicature Act and the Constitution.

The Parliamentary vote was an overwhelming 41-4 as Samoa passed the amendment bills that reshapes Samoa’s Judiciary, adds Communal Rights to its Constitution and makes several changes to the Lands and Titles Act that governs sacred family “measina” and village structures.

The voices of the 4 opposing MPs were drowned out by the loud unison of “IOE” followed by the Speaker’s declaration, “Ua Manumalo le Ioe” as each amendment was passed into Law.

Never before has a set of amendments to legislation brought so much opposition and controversy in Samoa (see History of the Debate below).

The amendment Bills were first tabled as a package before Parliament in February 2020, moving to second readings with the only comments being from Olo Fiti Vaai, the lone opposition at the time.

The Parliamentary Select Committee tasked to hear public opinions and concerns before the third and final reading of a Bill then took an unprecedented approach to go out into the community and engage in public consultations which critics say was a flawed approach of promoting the Bills instead. 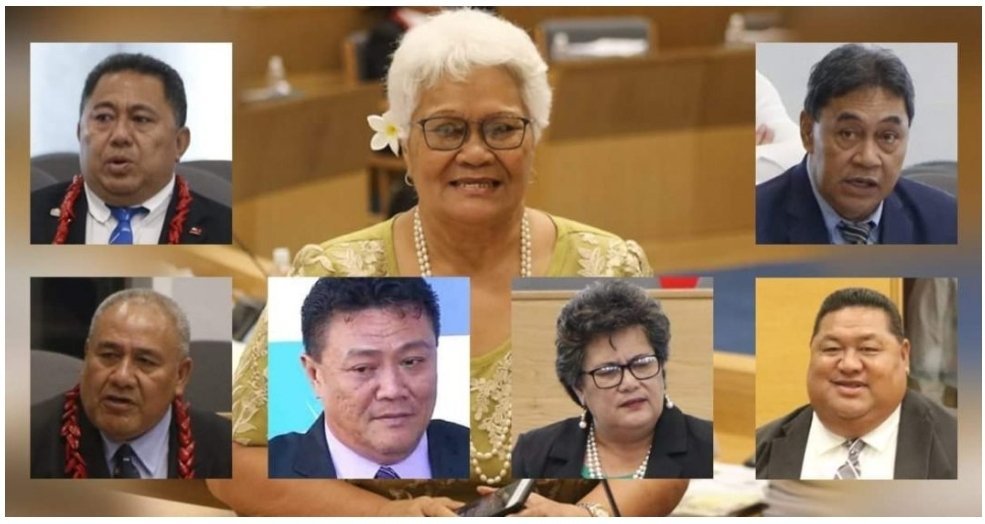 When the final 100+ page report of the Parliamentary Select Committee was presented in Parliament yesterday by Gatoloaifaaana Amataga Gidlow as Chair, former Deputy Prime Minister Hon Fiame Naomi Mataafa tried to propose an amendment to the report as allowed under Samoa Parliamentary Standing Orders. Fiame was quickly shut down by the Speaker who moved a motion to accept the report for discussion of its individual proposed amendments for passing into Law.

Fiame sought the opportunity for Members of Parliament to question the Parliamentary Committee’s Report in its entirety, arguing the importance of the issue of individual rights.

As Chair, Gatoloai responded that individual rights of all Samoans as provided by Article 4 of the Constitution remained protected.

Fiame further argued that the new LTC Court and its additional layers are being mandated by Law to uphold communal rights, and asked again what remedy is provided by Law for our people to rely upon, when their individual rights are affected by a ruling of LTC.

“How then would individuals going before the Lands and Titles Court, be assured that their individual rights are protected?”

Prime Minister Tuilaepa Sailele Malielegaoi, in an approach to end the debate, weighed in to say the jurisdictions of the two Courts are well established. 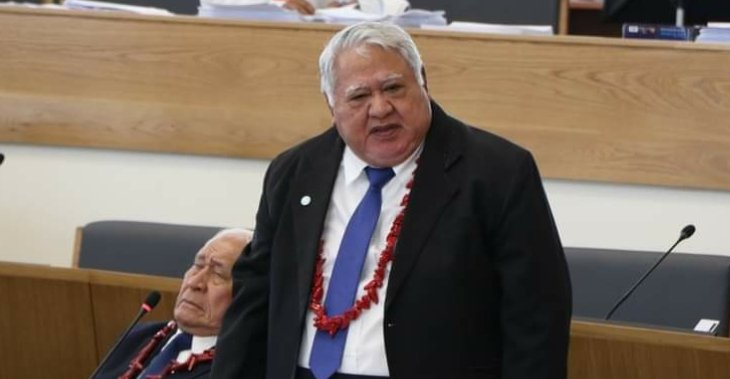 Not backing down, Fiame also challenged some of the wholesale changes proposed by the Committee, arguing that there were sections completely overhauled and replaced by wording of new Law, which Parliament and MPs were seeing for the first time.

FAST party leader Laaulialemalietoa Leuatea Schmidt raised the issue of MPs being given a short period of time to read through the Parliamentary Committee’s 119 page Report, “that contains more than a hundred amendments..”

Olo Fiti Vaai tried to zoom in on the amendment that had proposed a limit to the number of “matai sa’o” (high chiefs who sit at the head of family hierarchy). He said the Committee had conveyed this would be removed but he could still see it there.

Minister of Justice Faaolesa Katopau Ainuu had said in his ministerial speech that many had opposed this during consultations, and agreed that the selection of matai sa’o lies within Samoan families and not the Government. Gatoloai explained that the limit to 5 matai originally proposed had been removed, however, a recommendation to families to uphold the mamalu of titles still remained.

After months of public debate, the three amendment bills were finally passed into Law at around 6pm last night, Tuesday 15th December.

The law changes passed span across three major pieces of legislation. Only time will tell how it will impact on issues and questions raised and debated over the past several months such as:

Have we undermined the Separation of Powers between the three arms of a democratic Government by creating a fourth pillar in the LTC?

Will the many changes to the  Lands and Titles Act passed yesterday increase the role of government in family titles and customary land matters?

Will the split of the Court system create a legal conflict in upholding an individual’s basic rights as set out in S4 of the Constitution?

Will individual rights be diluted with the introduction of communal rights to Samoa’s Constitution?

Or as assured by the Parliamentary Committee and supported by 41 Members of Parliament, individual rights are well protected, Courts and Judiciary powers remain intact and issues of Lands and Titles will have a dedicated Court of Appeal to further protect family “measina”.

Only time will tell.

The issue first attracted public attention when the Samoa Observer reported a leaked letter dated 6 April 2020 from the Samoa Judiciary to the Executive Director of the Samoa Law Reform Commission, stating concerns about the lack of public consultations; warning that the amendments essentially splits the judicial system into two, by establishing the Lands and Titles Court as a fourth pillar of Samoa’s government structure.

The Samoa Law Society followed with an aggressive media campaign to publicly air their concerns.

SLS warned that if passed, the three Bills would “collectively represent the most drastic and incompetent attack on the stability of the justice system and the operation of the Rule of Law ever seen in Samoa since independence”.

SLS called the legilsative drafts by Samoa’s Law Reform Commissioner “defective and unsuitable to be formally distributed, let alone tabled in Parliament”. The SLS maintained their position over the months to come, with a final submission in late September, still pleading with the Government to reconsider the proposed changes which they remained steadfast, would impact the fundamental rights of every citizen of Samoa.

Former Attorney General Lemalu Hermann Retzlaff took a different stance, and responded with a public statement that, “the overriding purpose of the Constitutional Amendment is to deal directly with the issue of access to legal justice for those who lose an appeal at the Lands and Titles Court (LTC)”.

Lemalu said the current avenue available to families of a Judicial Review (JR) against an LTC decision to the Supreme Court, can only legally deal with procedural issues as to how the hearings were conducted, and not reopen family arguments over genealogy (gafa) or village structures (faalupega).

On the issue of splitting the Judiciary and the stability of the three pillars of Government Lemalu argued, “the two Courts can run side by side within the MJCA administration (as they already currently do), but separately in terms of their jurisprudence (law making rulings) – because they are fundamentally dealing with two different cultural contexts in their substantive responsibilities. [Such is the bicultural duo systems of government Samoa has admirably in my humble view, balanced and journeyed with since its Constitutional independence]”.

On the issue of Individual Rights vs Communal Rights the former Attorney General said, “The Constitutional Reform does not therefore propose to revoke any of the individual freedoms that are sacredly protected in our Constitution; on the contrary it seeks to enhance the right to a fair (substantive) trial via a new Appeal avenue within the LTC route; and it simply cannot by creating a specialist Court of Appeal, somehow then remove the separation of powers of the three branches of Government from the Constitution.”

“Further, it cannot unilaterally encroach, and tell families what to do with their Lands and Titles, as it is a Civil Court – it can only therefore, deal with cases that the public decides themselves to file for consideration and relief as it were.”

The Office of the Ombudsman issued its position paper in early May, with a focus on the debate between Individual and Communal rights. “The National Human Rights Institute of Samoa did not support drastic amendments of the Constitution proposed by the Bills”.

Maiava Iulai Toma said they agreed with the objectives laid out by Government but could not see “how the.. highly desirable objectives are achieved in any substantive way by the Bills”.

On the issue of Individual Rights vs Communal Rigbts, NHRI said, “There is no such match up as an ‘individual rights versus communal rights’ contest.”

Wrote the Samoa Ombudsman, “Individual Rights is intrinsic to society. Each member of society, made in the image of God, possesses these rights in equal measure. It is truism therefore to say that “if you protect the individual you protect society”.

After several other groups and individuals publicised their views, the Parliamentary Select Committee Chaired by former Minister of Health Gatoloaifaiga Amataga Gidlow in an unprecedented approach, were then tasked to conduct nation-wide consultations over the last several months.

When the Parliamentary Committee reached the consistuency of then Deputy Prime Minister Fiame Naomi Mataafa in early September, the Sao Faapito led her constituency’s position and publicly stated her concerns about the discretionary unfetted power the proposed amendments give the Lands and Titles Court.

“If we go back to the 2016 Public Inquiry and report, the capacity of the LTC was one of the key issues raised;

“Without proper processes, definitions of power, rules and boundaries, there is unfetted power given to the LTC, which means decisions will be determined solely by the person sitting”;

“As they are currently drafted, I will not be voting to support these changes”, Fiame had said at the time.

That same week on September 11 Samoa’s Deputy Prime Minister resigns from Cabinet over the amendment bills which triggered her removal from the HRPP political party to become an Independent MP.

Fiame then held several forums to explain the impacts of the Bills within communities, and made public appearances in the media to more widely highlight grave concerns with the Bills, now Law in Samoa.