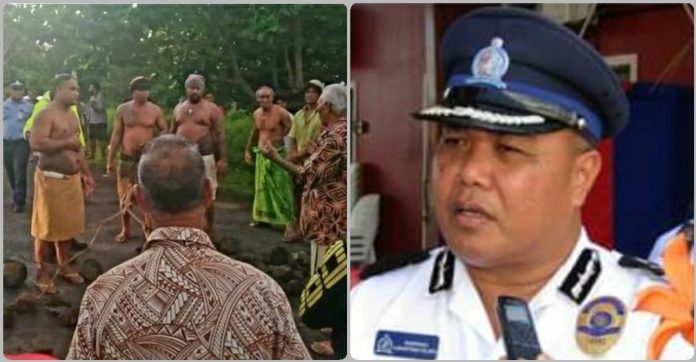 23 August 2021 Apia Samoa. Two Salelologa men have been charged and arrested in relation to the roadblocks at Salelologa village that forced a Human Rights Protection Party (HRPP) car rally to turn back earlier this month.
The arrests were confirmed by Deputy Police Commissioner Auapaau Logoitino Filipo who had led the police response in Savaii that morning when villagers placed large rocks on the main road to stop a police-approved HRPP rally from passing.
During an interview with Samoa Global News this afternoon, Minister of Police Hon Faualo Tauiliili Lefau Harry Schuster said the pair were arrested and charged for pointing guns towards Police officers during the incident.
The Minister said the information he has received is that the two men are still in custody, and if Police have grounds to oppose bail, then that would be the position taken.
Asked about a rumor that Salelologa would retaliate by putting a stop to Samoa Police from entering the village, the Minister of Police said it was important for village councils to understand that all citizens come under the rule of law.
Faualo added he has also spoken to the Member of Parliament of Salelologa, also the Minister of Justice Hon Matamua Vasati Sili Pulufana about the issue, so that she was made aware of the Police stance.
“I have spoken with Matamua and explained to her that if Police have good reason to oppose bail and have these two kept in custody, then that would be the position we take”, said the Minister of Police.
The HRPP car rally had to turn back and head north after coming across a strong resistance from the village of Salelologa.

Village youth had come out in numbers to protest against the car rally. Gunshots were heard being fired, coming from nearby farmland and bushes.

Police say they are also looking into a Sasina roadblock from the same day, where some matai and taulele’a also used rocks to block the road. A video widely shared showed villagers placing a portrait of Laaulialemalietoa Leuatea Polataivao Schmidt infront of the rock pile with a clear message, that HRPP’s car rally was not welcome in their village and district.