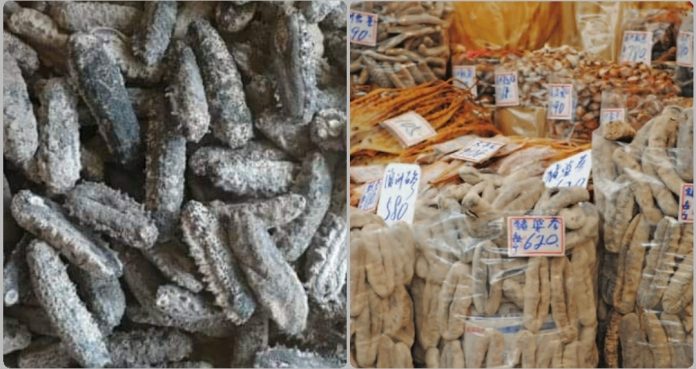 A press statement from MAF states fishery products with an estimated value of USD$5,000 tala were seized last Saturday 21 August 2021.

“There were freshly processed sea cucumber with an estimated volume of 150 kg (wet weight) and 30 kg being boiled and processed..”

According to MAF Dried Sea Cucumber or bėche-de-mer as commonly known in the export market, retails at an estimated price of USD $20 – $100 per kilogram, depending on the species.

MAF says live sea cucumber found at the operation and were immediately seized and released into a nearby sea area.“They stand a good chance of survival”.

An investigation has been launched into this alleged illegal processing of sea cucumber.

It is an offence to operate an establishment for the process, trade and market of any fish without the required licence under the Fisheries Management Act 2016.

Last year in July the owner of the popular Treasure Garden Restaurant in Samoa, Mr Chen Pao was convicted and fined $3,000 tala in the District Court of Samoa for a sea cucumber operation worth hundreds of thousands.

In that case the Court had heard that 431 kg of processed sea cucumbers seized during a joint search operation by MAF’s Fisheries Division and the Maritime Unit of the Ministry of Police had an estimated value of USD$344,800 based on an expert’s assessment that it could sell for up to $800 US dollars per kilo in the Asian market.  The Court heard further evidence that Asia was the main market for processed sea cucumbers, quoting a study by the South Pacific Commission on the market value for the final processed product in Hong Kong.

Pao was found guilty of operating a sea cucumber fishery for export purposes without approval, breaching section 10 (b) of the Fisheries Act 1988, as well as operating a fish processing establishment without a license under section (c). Each offense carries a maximum penality of $5,000 tala fine.

During the search of the Treasure Garden restaurant at Fugalei, police found quantities of sea cucumbers at different points of the manufacturing process.

Some were being dried on trays in a cooking oven, some were already dried and packed in plastic bags and some were found packaged up in freezer bins. Other species were spread out on the floor near windows, to catch the sun.