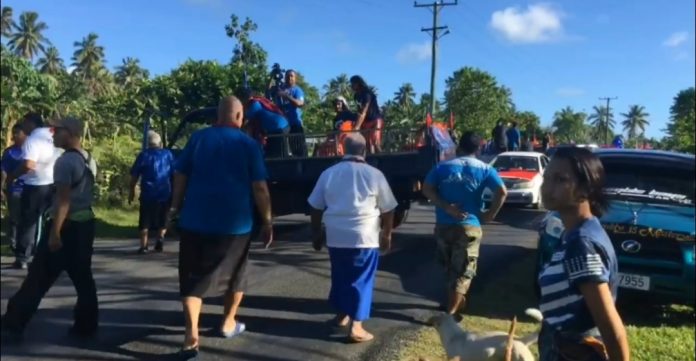 5 August 2021 Savaii Samoa.The Human Rights Protection Party political car rally had to turn back and head north after coming across a strong resistance from the village of Salelologa.

A video posted by a by-stander that has gone viral shows matai negotiating with HRPP members and party secretary Lealailepule Rimoni Aiafi.

Gunshots are fired as village matai advise HRPP members to turn their car rally back and go the other way for the sake of maintaining peace.

Village youth had come out in numbers in protest against the car rally and are suspected to have been hiding in nearby farmland where the gunshots were fired.

The HRPP line of vehicles was seen turning around from Salelologa to head North.

Although cut short, the HRPP rally did move through parts of Savaii and was greeted by the village of Papua, in support of their elected Member of Parliament, Peseta Vaifou Tevaga.

Deputy Police Commissioner Auapaau this morning told Samoa Global News they had to remove rocks placed as road blocks along the road at the border of Salelavalu and Salelologa.

The HRPP party had also planned to place wreaths at the grave sites of former HRPP leaders, who both served as Prime Ministers of Samoa; Hon Vaai Kolone Vaai and Hon Tofilau Eti Alesana.

Former Prime Minister Tuilaepa Dr Sailele Malielegaoi was seen placing flowers by the grave of Tofilau Eti Alesana, however, the rally did not get to Vaisala where the late Vaai Kolone lies. A live of former MP Vaai Papu Vaai shows him rejecting the HRPP visit to his father’s grave, saying he and his family do not support the purpose of the rally.

“I do not agree that the Chief Justice and the members of the Judiciary have destroyed the Constitution,” said Vaai Papu.

“There are upcoming by-elections and yet HRPP are here causing distress (faavevesi). The HRPP should be renamed the HRDP; Human Rights Demolishing Party”, says the former Tautua Party member.