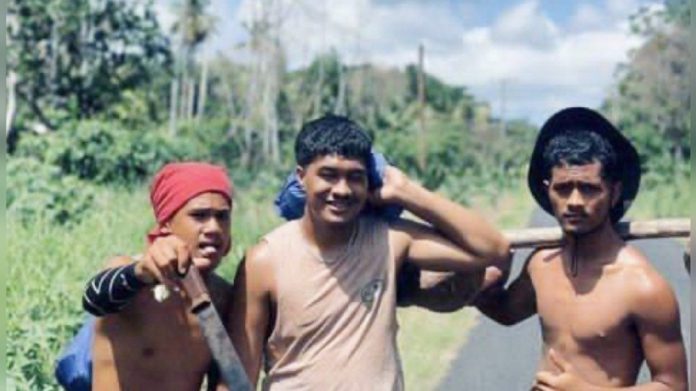 Tuesday 19 April 2022 Apia Samoa. Samoa’s back to back performances over the past two weekends of the HSBC World Sevens Series has not only reignited the interest and excitement of Manu Samoa 7’s fans across the globe, but it has also left a trail of youngsters aspiring to one day, be selected into the squad.

Samoa returned to the HSBC world sevens series by advancing to the Cup Quarterfinal in Singapore after strong wins over Spain and England. A week later, the squad of all-but-one local, and 9 debutants finished fourth in Vancouver. It was the first time a Samoa 7’s side had advanced to a Cup Semifinal since Las Vegas in 2018.

The lifted performance of the Manu Samoa 7’s saw friends, family, fans and supporters flood social media platforms with videos, tik-toks, and photos capturing special moments from Singapore and Canada. One group of youngsters from Leulumoega in Upolu have attracted attention by making a tribute home video, mimicking one of Manu’s tries.

Brothers Penitito and Robert Lafo, together with their cousin Penani Masaga, say they are inspired by the all-local team that represented Samoa at the two HSBC events, after the exodus of five overseas-based players.

“If they can do it, then we can do it too,” says St Paul VI College Head Boy, Penitito Lafo.

Starring in the humourous home video is Penitito Lafo and his younger brother Robert Lafo, a Year 10 student at St Paul VI College, as well as their cousin Penani Masaga who is a Prefect at Avele College.

They tell Samoa Global News the performance of Muliagatele Brian Lima’s young side has inspired them to set their goals for the sport that they love.  “We play for our schools, and also for our village teams,” says Penani Masaga, “and we want to say to the Coach, we are here for your selection,” he says, joking not joking.

“We wanted to show our appreciation to the Sevens Team for their courageous efforts to represent Samoa infront of the world stage,” adds Penani, “that’s why we posted our video.”

The three aspiring rugby players from Leulumoega took it upon themselves to make a skit imitating one of Manu’s super tries over the weekend. The commentators are heard excitedly describing the “No-Look-Dive-Try” made famous in Singapore by Tamauli’s Uaina Sione in the match against England.

Masaga said the skit was filmed while they were on route to the plantation for their daily chores and to bring back food and firewood for the family evening meal. It was filmed by another cousin who was with them, Tiueti Faafiti.

“We wanted to celebrate the team’s success in Singapore and then they did it again in Vancouver, and we want to wish them all the best for the upcoming tournament in Toulouse..”

The youngsters, all in their late teens, have dreams of playing for the Manu Samoa 7’s, and say they want to play “in the near future” under Head Coach Lima, “because he picks us local players”.

“Although the boys didn’t quite take out the top ranks, they’re definitely ranked top in our hearts,” says Avele College Prefect, Penani Masaga.

“Manu don’t give up, be strong, we’re all rooting for you, be ready and remember our nation of Samoa when you run onto the field,” added St Paul VI College Head Boy, Penitito Lafo.

And as the Manu Samoa 7s squad return to camp and prepare for the next HSBC leg in Toulouse France, they can rest assured they are representing thousands of aspiring young players across Samoa, who can now see themselves running onto the field at an HSBC world series comp, for their own debuts in the blue jersey.

“As we go to and from the plantation everyday during the lockdown, we can only dream of a time when we can play for the Manu Samoa 7s,” adds Penani. “The local boys in the Manu have given us hope”.

And the trio end with a message to the Manu Samoa 7’s players.

“Brother, if you ever feel weak or tired, just remember there are thousands and thousands of us here in Samoa who would love the opportunity to be where you are.. play for us brother.”