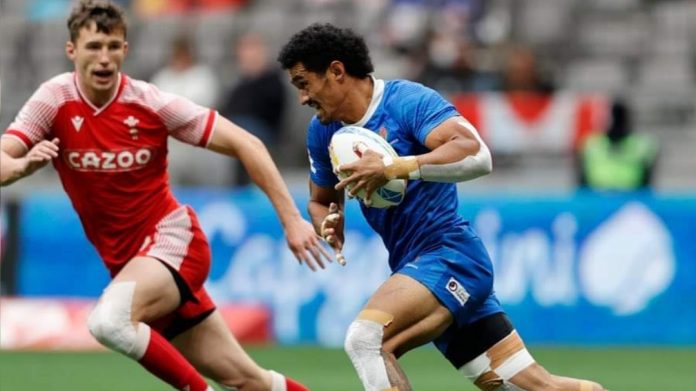 The Manu Samoa 7’s are through to the Cup Semi-Finals after a convincing defeat over defending Vancouver champions, South Africa.

The Springboks, who are currently at the top of the HSBC World Sevens Series table, came into this match undefeated in Vancouver after wins against Spain, Australia and Canada in pool stages.

Despite all of this, the young and eager Samoan outfit were not phased.

Straight off the kickoff they found their biggest player on the park in Vaovasa Afa Su’a who powered his way over the try line whilst carrying a Springbok player on his back.

Starved of possession, the Springboks were desperate for something to go their way, but as they continued to make error after error, the youngsters in Blue became more and more confident.

One man whose shown an exuberance of confidence is Tepatasi’s Va’afauese Apelu Maliko, who is a contender for the top try scorer in Vancouver this weekend. Apelu Maliko furthered his lead on the try scoring table by adding two more tries against South Africa.

A 21-0 lead into halftime for Samoa looked quite comfortable, but no lead is safe when dealing with South Africa who scored straight after halftime.

Samoa needed at least one more try to secure a semifinal spot and it came via the new kids on the block Fa’afoi Falaniko and Motu Opetai.

Opetai has barely played any minutes this season behind  an outstanding forwards trio of Uaina Sione, Apelu Maliko and Vaovasa Afa Sua. However, Muliagatele Brian Lima put trust in the rookie and it payed off.

Opetai found himself running in acres of space after receiving an offload from Falaniko. It took 3 Springbok defenders to take the big man down before he popped it back to a trailing Falaniko to put the match to bed.

This victory however came with a big cost to the Manu, losing two of their best players to injury. Standout speedster Steve Rimoni Onosa’i was subbed off before halftime and Co-Captain Melani Matavao found himself in an awkward tackle. Both players have failed off-field Head Injury Assessments (HIA) and declared concussed meaning they won’t be available for the semis.

With Paul Scanlan already out of the tournament due to a red card on Day 1, Samoa are looking thin in the back line.

Samoa will take on Pacific brothers Fiji at 10:44am local time.