The province’s premier, Sihle Zikalala, said the death toll had risen to 443, with a further 63 people unaccounted for.

Zikalala said nearly 4,000 homes were destroyed and more than 8,000 were damaged, most in the coastal city of Durban and its surrounding areas.

The government has declared a nation-wide state of disaster and the South African military says it is deploying more than 10,000 troops to help with relief and rescue operations.

In an address to the nation on Monday evening, President Cyril Ramaphosa announced a series of measures aimed at helping those affected and the rebuilding work.

Officials have described the floods as some of the worst to ever hit the KuzaZulu-Natal province. 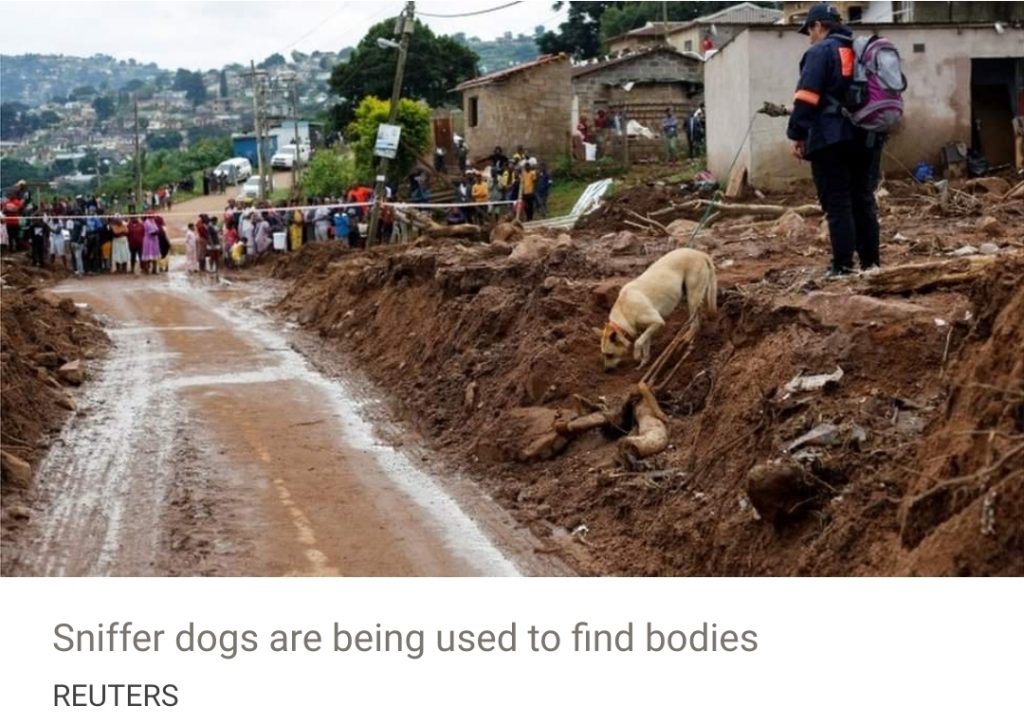 Both the police and army were involved in the search effort, with six more bodies recovered on Sunday, local media reported.

No clean water or electricity

In a statement, the South African National Defence Force (SANDF) said its troops would bolster search and rescue operations, as well as assist in transporting aid to victims.

Army plumbers and electricians would also work in areas that have been without water and electricity for a week, it added.

Some communities are completely cut off because roads and bridges have collapsed.

“We don’t have electricity in many, many areas,” said Imtiaz Syed, the leader of the Active Citizens’ Coalition.

Nearly 300 schools and some health facilities have also been damaged.

Weather experts have pointed to climate change contributing to changing patterns that have resulted in the extreme events becoming more frequent.

The rainfall has since eased but the amount of rain which fell last Monday was equal to about 75% of South Africa’s average annual precipitation.

Officials have called it “one of the worst weather storms in the history of our country”.

There are reports that the rescue effort is being hampered by poor visibility as a helicopter continues to bring people back to safety.

Jomba Phiri, who lives in the region’s main city, Durban, said his house had been swept away in the floods.

Parts of the crucial N3 highway which connects Durban to South Africa’s economic heartland of Gauteng province have been blocked.

President Cyril Ramaphosa has visited the area and pledged to help.

“Even though your hearts are in pain, we’re here for you,” the Reuters news agency quotes him as saying.

He also described the disaster as a “force of nature”, which some have disagreed with. They blame poor drainage and badly built houses in low-lying areas for the high death toll.

Durban Mayor Mxolisi Kaunda denied that poor drainage was to blame, saying the scale of the flood was unexpected.

Scenes of destruction are still evident throughout the area. Some of the roads to the port of Durban, one of the busiest in Africa, are impassable after the swollen river washed mud and debris onto the roads.

Operations at the port have now been suspended. A shipping container warehouse near a busy highway was severely flooded, and hundreds of containers were washed away.

In an industrial area called the Bluff, which forms part of the port, the BBC reports cars overturned on the road, or crushed by debris. Companies are using water pumps to drain the water from their premises.

There is also a hunt for crocodiles that were washed away during the floods, although most have since been found.

Crocodile Creek Farm, about 40km (25 miles) north of Durban in Tongaat, says 12 crocodiles were swept away after torrential rain hit the area.

Ron Naidoo, a community pastor in the town of Tongaat, told the BBC he had been kept awake through the night by the rising floodwaters and had seen police drag a car out of the river with a body inside.

“It was traumatic because it is the first time that we have seen the river rise so high here,” he continued.

Troops, police and volunteer rescue workers are operating out of a small civilian airport normally used for airshows and training pilots. NGOs are working to distribute clean water, and authorities have promised to deploy water tankers.

Shawn Herbst of the first responder company Netcare 911 said: “Sadly there are still bodies being recovered from homesteads, especially from the rural areas.

“There is still damage taking place, especially with the rain we are experiencing today which is aggravating the areas that have been damaged.”

The floods have wrecked more than 13,500 houses and completely destroyed about 4,000. Thousands of displaced citizens are in shelters scattered across the city.

In a church speech to mark Good Friday, the South African president, Cyril Ramaphosa, urged people to pray for all those affected by the floods. He called the floods “a catastrophe of enormous proportions … not seen before in our country”.