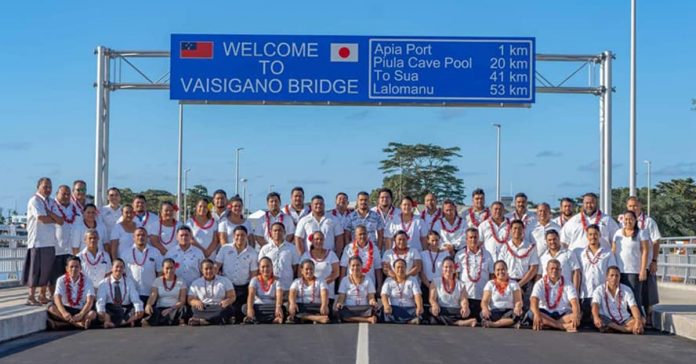 During this administration, the Land Transport Authority (LTA) has delivered and performed exceptional well under daunting and challenging circumstances which includes unpredictable flooding due to climate change and COVID-19 world pandemic.

But overall, the Minister of Transport Papalii Niko Lee Hang is content with the LTA’s performance under these circumstances.

“The plan not only targets roads and bridges repairs damaged by recent natural disasters but will also upgrade, rehabilitate and reconstruct existing road infrastructure to strengthen its resilience to climate change and extreme weather events.

“There’s been a lot of progress and improvements made by government to address our transport needs,” he added.

“But with continued population growth, we’re experiencing that our transportation needs are ever increasing.

“Fortunately government has developed a long term plan to address our air, land and sea needs now and for the next 50 years.”

In the last five years, the Authority has tar sealed and widen access roads to all of the 50 electoral constituencies in both Upolu and Savai’i. And work is continuing based on funding available.

Despite the international border closures due to COVID-19, LTA with the support from Contractors has continued works on major road projects to safeguard any income disruptions to the workers during these trying times.

Government has also encouraged utilizing of local contractors and local materials for major funded projects to enhance knowledge and skills of our local people in implementing multi million dollar valued projects and contributes significantly to  our economic growth. Furthermore, our local people will have the necessary skills and knowledge to maintain these large infrastructure.

FISCAL SPENDING IN THE LAST 5 YEARS

(The funding totalling close to $130 million tala does not include grant funding from Samoa’s Development Partners.)

The total capital works above for each Financial Year is included in the overall fiscal spending in the last 5 years.

The LTA achievements has also received praises from Prime Minister Tuilaepa Dr. Sailele Malielegaoi saying it is a testament of Governments’ resolve to meet the country’s transport needs.

“Under no circumstances are the bridge and all other Government initiated infrastructural projects (such as new roads, schools, water, etc.) designed to be used as a campaign strategy by Government, as a lead up to the 2021 General Elections,” says the Prime Minister.

Labeling the political rhetoric as a “cosmetic smokescreen” by critics to belittle Government, Tuilaepa reiterated that since the HRPP came into office 42 years ago, their party is more than a political party but a Party of statesmen and stateswomen.

“A politicians’ prioritizes his or her re-election while a statesman is a visionary planning for the benefit of future generations of Samoa. That is the HRPP motto,” he concluded.