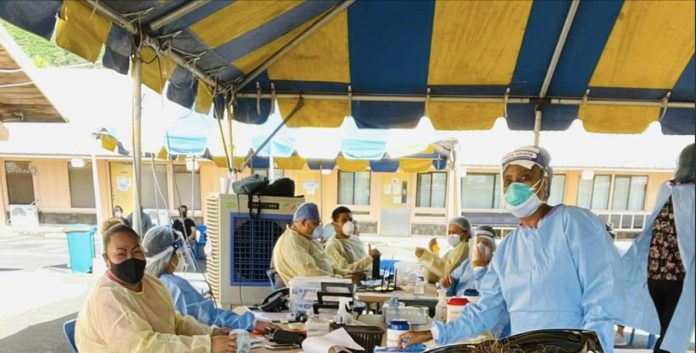 Pago Pago American Samoa Covid Update. American Samoa has recorded one new covid-related death week, taking the death toll to 20 since the outbreak on the 22nd of March. In a Task Force press conference aired on KVZKTV last Thursday, the LBJ Medical Centre representative stated in a press conference that the new fatality is a 64 year old female who was double vaxxed but had not yet received a booster shot.

The LBJ hospital also confirmed that there was another death under review, yet to be confirmed if it is covid-related.

The Department of Health in Pago have reported the cumulative Covid-19 case count to be 5,564 with over four thousand cases who had previously tested positive, now recovered or have completed their 14 days of isolation.

The Health Department chart shows the Territory’s total number of positive cases, showing the more densely populated villages of Tafuna and Nuuuli with the highest numbers while while Manu’a remains COVID free.

83% of the Territory’s total population are fully vaccinated. Boosters are currently being carried out via drive-thru sites, with members of the public seen lined up each day.

The Covid-19 Task Force had earlier addressed an issue with nurse’s overtime payments, raised in a House Health Committee hearing two weeks ago.

According to the Task Force, nurses haven’t had any recent issues with their overtime payments, but are still awaiting their “Hazard Pay”.

Dr. Akapusi Ledua, Acting Chief of Staff at LBJ Hospital says submissions to the Hospital Board and CEO were meant to be made last week. “There a few things that we need to work on, that we need to finalize” said Ledua. He added a proposal would be submitted to the CEO who would present it to the Board.