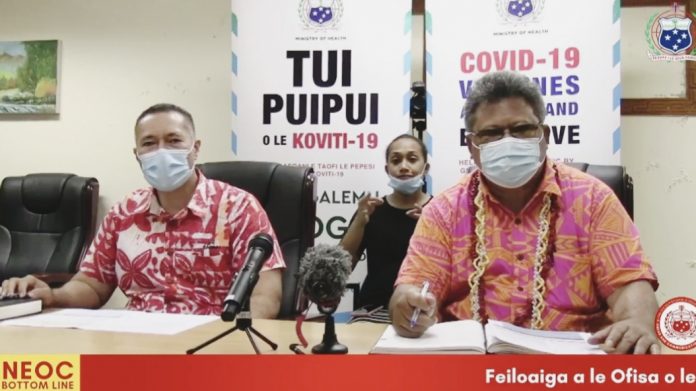 After three cancellations and notices for time reschedules (2pm, 5pm, 2:30pm, 4pm) the online press conference was eventually held at 4pm Thursday afternoon, offering additional information from that which had been distributed and publicised in a situational report just an hour earlier, at 3pm.

Here’s what you would have missed if you haven’t yet listened to the online press conference aired on the Government Facebook Page:

1. In 3-4 Weeks We May Be Able to Determine When the Outbreak will Peak

Dr Naseri says cases are steadily increasing each week, and in three to four weeks, Samoa may be in a position to make a determination about when the outbreak will peak.

Leausa says MOH have been able to determine the rolling average of positive cases from an analysis of the past four weeks.

“The rolling average has increased steadily. On the first week Samoa was registering an average of 94 cases per day, this lifted to 147/day in the second week, and 203/day in the third week. This past week from the 7th to the 13th of April, cases are now averaging 270 per day”.

“Perhaps in the next three to four weeks, we can know for certain when the outbreak will peak..”

According to the Director General of Health, there are three to four variants of omicron currently being monitored by WHO.

“There are omicron variants that have not yet reached Samoa,” said Leausa, “so it is important for us to monitor and detect these early”.

“In most countries around the world, when a wave of one variant dies down, they are hit with another wave of a different variant”, says the Director General.

Leausa says the positive side to this, is that Samoa is well prepared with its vaccination programme and booster shots, and the country is also getting used to other ways of deterring the spread of covid-19.

“We are also now used to wearing masks, keeping up hygiene measures such as washing hands, and keeping social distances..”

Further to the 701 cases detected in the 48 hour period from 2:00pm Sunday 10th April to 2pm Tuesday 12th April – a further 281 more cases have been detected in the next 24 hour period, taking the community transmission number to 5,012 – as at 2pm Wednesday 13th April.

The Director General of Health said 133 cases have been treated at the National Hospital at Motootua, with 104 of those recovered and returned home. There are currently 19 patients at the hospital – 17 in the isolation ward and 2 in ICU.

Border cases have reached 63, including 15 from the last repatriation flight of 29th March from Auckland. Samoa’s total cases as at Wednesday 13th April have reached 5,074.  There have been 38,467 rapid antigen tests since the start of the outbreak.

Since the outbreak was detected on March 17th, Samoa had been receiving situational reports on a daily basis, updating the public on the number of cases, and other demographics such as the age of those who had tested positive, numbers for Savaii, Upolu, Manono and Apolima, as well as the number of active vs recovered cases.

According to Director General Leausa Dr Take Naseri, the daily reporting will no longer be forthcoming, because of a resource issue within the Ministry, and because some of the data which had previously been included by MOH in its reports, were unverified.

“These reports are prepared by the Ministry of Health, and reporting on a daily basis is not easy (e le faigofie),” said Leausa, “The staff are feeling tired, and some have been affected by covid.”

Leausa said the current outbreak is not expected to peak for another four to six weeks, and if reports are submitted on a daily basis, the prolonged period will become too much for the staff to handle.

A quick look through the daily situational reports, however, will show Samoa has not registered less than 100 cases per day since the first week.

On the issue of information that is now missing from situational reports, Leausa said some of the information that had been included in previous reports have now been set aside because they were unverified.

“For example,” said Dr Naseri, “the recovered cases was showing that up to 47% had recovered, however, when we took a sample of healthcare workers, we found the recovery rate after 7 days was much lower than that.”

Leausa said that out of over 200 healthcare workers infected with covid, less than 30 returned to work after 7 days.

“So we cannot know for sure what the recovery rate is, so we do not want to give information that is incorrect.”