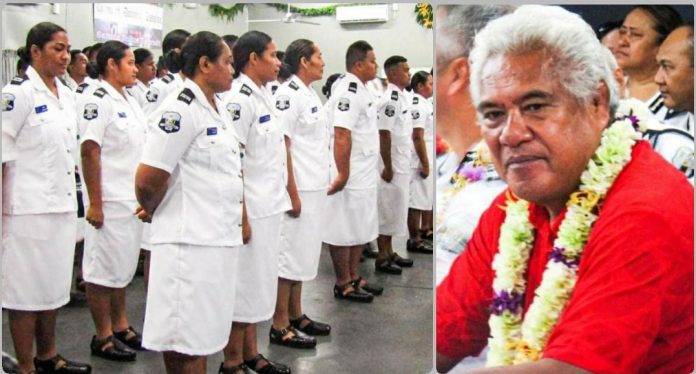 The Ministry of Police, Prisons and Corrections, together with the Fire and Emergency Services Authority held a special ceremony this week to welcome their new Minister Hon Faualo Lefau Harry Schuster and his Associate Minister, Fepuleai Faasavalau Faimata Su’a.

In his remarks, Faualo reminded the law enforcers as well as Samoa’s frontline first responders and fire fighters that they are above all else, public servants, sworn in to serve the people of Samoa with loyalty.

Faualo highlighted the importance of the oath that all police officers and fire fighters have sworn by.

“The Oath is specific to the Police but guiding principles of the oath are applicable to all in the Police, Prisons and Fire Service; as well as all of us as Public Servants to the Independent State and the People of Samoa,” Faualo said.

“As Public Servants, our loyalty and allegiance in serving is pledged to the people of Samoa and the Government of Samoa,” added Faualo.

A lawyer by profession and former Judge of the District Court, Faualo highlighted the importance of serving the people of Samoa with honesty, and without favoritism.

“We are called to serve without favor or affection, malice or ill will at all times; and that means we are asked to serve everyone equally,” Faualo reiterated.