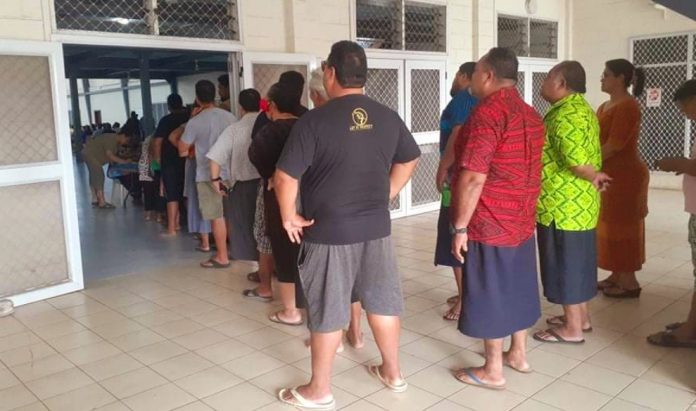 Over 300 members of the Public Service Association (PSA) are gathered for a meeting this morning at Tuutuuileloloto Hall, Mulivai.

The PSA meeting is closed to the media as conveyed by Mrs Gaualofa Matalavea-Saaga who said interviews can be taken with PSA executive members at the end of the gathering.

PSA issued a formal notice earlier this week inviting all public servants to attend the meeting.

This morning hundreds of public servants have turned up to exercise their fudamental rights under freedom of association to gather as a union of workers.

Former AG Savalenoa Mareva Betham-Annandale who was this week removed from Office on advice of the Prime Minister was among those gathered.

Samoa ratified all 8 core conventions of the International Labour Organization (ILO) in June 2008 in a commitment that includes Freedom of Association and Protection of Right to Organise Convention and the Descrimination (Employment and Occupation) Convention.

Samoa is an active member of the UN Tripartite Forum where employers, workers unions and government work together towards agreed Decent Work Country Programs. Decent Work commitments are signed with the overarching goal of providing an environment so everyone benefits from “working conditions that offer freedom, equity, security and human dignity”.

Earlier this week, an open letter addressed to Hon Fiame Naomi Mata’afa was delivered together with a request for a meeting and a petition signed by hundreds of public servants.

The Prime Minister confirmed during her weekly press conference that she would respond to the letter in due course.

“I have received the letter and as it is addressed to me, I would like to have the time review the substance of the letter and to make the appropriate responses..

“The letter was an open letter, it has been out in the public prior to its arrival to my office, but I think it’s only right that now it has arrived to my office formally, that I would like to take the time to review and make the appropriate responses”, said the Prime Minister.

Fiame has put aside speculation the new FAST administration would rid of many Public Servants.

“I would like to make it quite clear through this publication, that that is not the intent of this new administration. It is not a policy, and we have continuously said on other occasions that we as an incoming administration, we hope to work with our public servants, they are the implementers of government policies, and we will continue to do so”, assured the Prime Minister.

The Prime Minister said both government as an employer and as well as workers – both sides of the issue are covered by the law.

“And I would just like to give some comfort to the concerns that seem to be prevailing that somehow this new administration has a policy that we will clear out the heads of departments that are currently in place”, said Fiame.

“I think it’s important that we actually look to the specific instances where some of the officials are either being let go, or there are negotiations in process, especially in the situation where the government feels that we cannot work with these individuals and mainly the AG and the Clerk of the House because of past happenings, not necessarily of their making but of circumstances around the electoral process and the processing of issues through the courts..,” said the Prime Minister.

At the PSA meeting this morning pamphlets are being distributed that lists the support offered by PSA, as well as reasons for joining the association. On another page the work done by PSA is listed for the information of the union body.