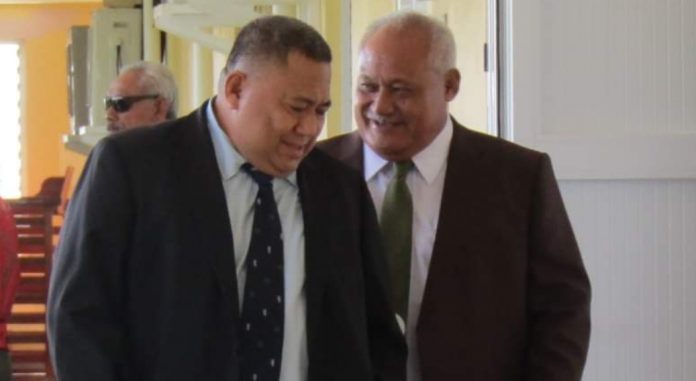 19 July 2021, Apia Samoa. Negotiations between two former Members of Parliament for Fa’asalele’aga No.3 continues after the petitioner, Namulauulu Papalii Leota Sami Leota says there are still some parts of his negotiations with winning candidate, Papalii Li’o Ta’eu Masipa’u that have not been agreed to.

The election petition was mentioned today before presiding Justices Vui Clarence Nelson and Fepuleai Ameperosa Roma. Scheduled for 10am, the matter was put back to 2pm to give the parties an opportunity to settle out of court, however, discussions inside the Courtroom before and after the matter was called, did not lead to a solution.

Counsels for both parties requested the Supreme Court give time for Namulauulu Papalii and Papalii Lio to continue out-of-court settlement discussions. Justice Vui adjourned the matter to 10 am tomorrow (Tuesday) morning, stating that if a settlement is not reached, Court proceeddings would continue.

When Court was adjourned on Monday afternoon,  matais from the Itumalo deliberated over the decision and pleaded for the matter to be settled between the two former MP’s out of court, for the sake of peace.

Namulauulu Sami assured the constituency that there was no ill-feeling between he and Papalii Lio, however, there were still some parts of the agreement that needs to be clarified and satisfied. “This is why it is good to wait for tomorrow at 10am – by that time a decision will be made,” Namulauulu told Papalii.

Papalii in return thanked Namulauulu for his understanding and agreed to the decision made by Namulauulu to wait for tomorrow.

“I’ll talk to my Party (FAST) and discuss what has been done today,” Papalii told Namulauulu.