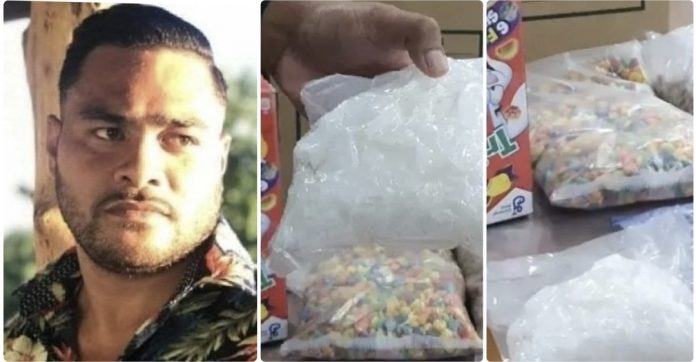 The hearing of former Customs Officer Pueleo Sefululua Peseta charged with the importation of methamphetamine is being heard in the District Court of Samoa this week.

Peseta, who had been working with the Ministry of Customs and Revenue (MCR) for four years at the time of his arrest, was charged by police for allegedly importing two separate consignments of drugs that arrived into Samoa from the US in December 2020 and February 2021. Both consignments were packed in similar fashion, concealed within cartons of popular American cereal.

When the second consignment containing 900 grams was discovered on the 2nd of February 2021, Police were still investigating the December 2020 drug bust, where joint efforts of the K9 Unit and the Ministry of Police intercepted and seized more than 500grams of methamphetamine.

The combination of about 1,400 grams estimated at more than $1.4 million tala was recorded as the largest drug bust in Samoa’s history.

During Monday’s proceedings before Judge Donald Kerslake, the ACEO of MCR’s Border Operations Division, Mr Alvin Onesemo described how K-9 Unit dogs sniffed out the drugs when the containers were unpacked at the Matautu wharf.

Onesemo said they were already on high alert when the February 2021 shipment arrived because it was coming out of California, the same place as the previous shipment.

“Our K-9 dog stopped next to this particular consignment and started to scrape the outside of the bin,” he said. “The bin was labelled with the name of Pueleo Peseta“.

When cross examined, defense counsel Lucy Sio-Ofoia asked the Head of Border Operations how he could have known from the actions of the K9 that there were drugs inside the box.

“Don’t the dogs usually run around and move busily from one place to another?” said Ofoia.

Alvin Onesemo responded that the K-9 Unit dogs are well trained in this field. “These are not ordinary pets. They are specially trained to aid police in these operations”, said Onesemo.

Onesemo responded that he had 15 years of experience in this area, and he was well aware of the mannerisms of the K-9s when they have discovered something suspicious.

Onesemo told the Court he then instructed his team members to open the box. They took cartons of cereal out of the rectangular shaped bin, and again saw the K-9 dog reacting. “He went straight to one of the cereal boxes and once again started to scrape at it”.

According to Onesemo, that was the very carton of cereal that when opened, contained methampetamine.

Defense counsel argued that her client may not be the only person with the name Pueleo Peseta in Samoa. Onesemo responded that he absolutely believed Pueleo Peseta, the former Customs Officer, whom he has worked with over the years, is the owner of the imported goods.

When asked by Prosecutor Fuifui Ioane, Onesemo told the Court the sender’s name was not on the import documents received by their division. He said investigations into the sender of the goods are out of his jurisdiction and would lie with police. Onesemo was also asked if he had contacted the shipping line who had transported the goods. Onesemo responded he did, however, that is again an investigation outside of the scope of their work.

The Court heard that when Peseta was questioned by the MCR Chief Executive Officer and Management on the same day the drugs were discovered, he immediately denied any knowledge of the consignment and said he had nothing to do with the imported goods. The defendant has maintained his innocence ever since.

The case continues in the District Court of Samoa.