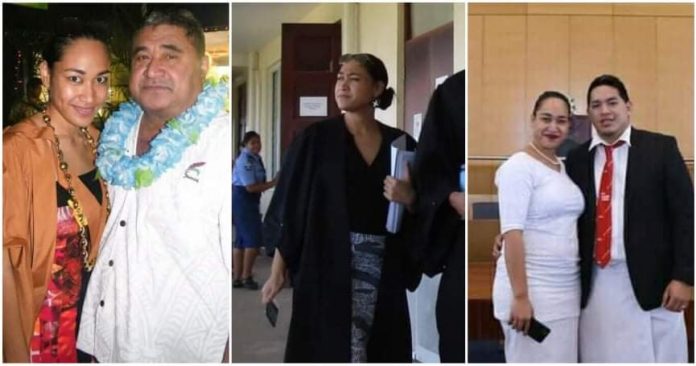 #CelebrateSamoaPeople Lucymaria Sio-Ofoia has frequented the corridors of the Supreme Court of Samoa for the past 8 years, and next month, she moves to the other side to join the team at Capital Legal Network, a law firm and consultancy group at the John Williams Building, Tamaligi.

Lucymaria has confirmed she will be moving from the Office of the Attorney General (AGO), but not until the 14th of April.  Since the announcement of her resignation from AGO, the Associate Public Prosecutor has been seen in Court on a daily basis throughout the past two weeks, finishing up cases and ensuring a smooth transition to her replacement.

The St Mary’s Old Girl says she has been with the AGO since she graduated from the University of the South Pacific in Port Vila, Vanuatu in 2011. Sio-Ofoia is one of Samoa’s many blessed awardees under Australia’s DFAT scholarship programme, and when she graduated, also received the Misa Telefoni Retzlaff Award for the Top Samoan Student of her year.

“I have learnt a lot on my journey with the Office of the Attorney General; I started my career here as a public prosecutor and it’s time to take on new challenges and expand my learning,” she shares.

Straight out of Uni, Lucy started working as a part time law clerk in the Criminal Prosecution Division of the AGO in 2012, and was admitted as a Barrister and Solicitor of the Supreme Court in August 2013.

“I’m moving to private so I can explore the other areas of law as much as I can, because all I’ve been doing is criminal prosecution for the last 8 years of my career;

“So I’m excited and hope to do more civil and commercial law, and legal work that doesn’t require me going to court”.

Asked what the most challenging part of her role has been, Sio-Ofoia says there is a continuous cycle of submissions due, and ongoing deadlines to adequately prepare a file for trial, and she surely won’t miss the late nights that comes with the job as a public prosecutor.

“The biggest challenge has been the late nights; we work almost every weekend, and there seems to be a never ending pile of files, and the limited time frames given to prepare and handle matters,” she says.

Lucymarie’s journey as a public prosecutor has been marked with a fair share of cases under close public scrutiny and the watchful eye of media.  She led the prosecution of a Police Sergeant for the assault of maritime officers, and the fraud case involving a Superintendent for petrol theft.

Sio-Ofoia led two cases involving local banks’ Automatic Teller Machines (ATM); one involving two Chinese nationals, and another ATM fraud case involving a Romanian national. She was also the lead prosecutor for a passport forgery case against a senior Immigration Officer.  Another notable case was the prosecution of the Land Transport Authority’s in-house lawyer and ACEO, where charges were dismissed by the Supreme Court, and now scheduled for re-trial following a successful application to the Court of Appeal.

“To be honest, every case I’ve handled has come with its own set of challenges; I can’t really say which was most challenging because they are each unique to their own set of facts,” she shares.

“My mom is my biggest inspiration, she is fearless, independent and also very humble.. she made me who I am today”.

“My Dad passed away in 2014 and I still miss his guidance and words of wisdom. He would always tell me, “When you do something, do it whole-heartedly”.

The Principal Partner of Capital Legal Network where Sio-Ofoia will begin her journey as defense counsel says they are excited and looking forward to having Lucy join the firm’s Criminal Division.