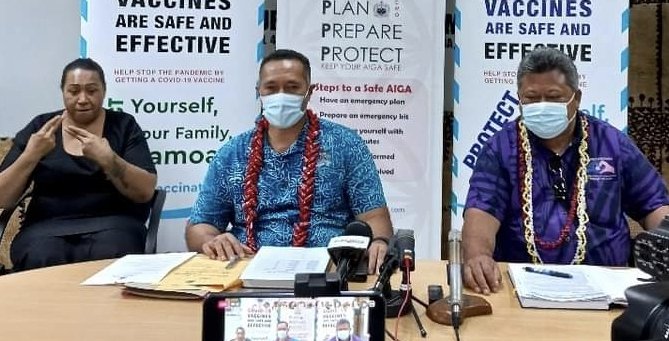 Samoa has spent well over $20 million tala on direct and indirect costs to quarantine repatriated citizens over the past two years, and Cabinet is considering a system of user-pays for certain categories of travellers in 2022.

According to the National Emergency Operations Centre Chairman Agafili Tomaimano Shem Leo, the cost per passenger to be quarantined for three weeks is between $3000 to $5000 tala.

“Its not just the cost of accommodation,” said Agafili, “it’s also the cost of health care workers doing routine testing of passengers during that period and the cost of security placed at each venue and other related costs.”

Agafili, who is also the Secretary to Cabinet as the CEO of the Prime Minister’s Department said Cabinet is considering a user-pays system for certain travellers who “come and go”.

“This will not apply to categories of travel such as our returning students, or citizens who travel abroad for medical reasons,” said the NEOC Chairman in a press conference with the local media this week.

Agafili said the Government intended to implement this sometime this year.

“The Prime Minister has often spoken about this issue. It is going onto two years now and if we continue in the same way, it will become unsustainable,” he added.

One Way Bubble with New Zealand

As a result, travellers from Samoa to New Zealand such as students, those seeking urgent medical assistance and seasonal workers have been exempted from having to undergo managed isolation upon arrival into New Zealand.

New Zealand’s Covid-19 Response Minister Chris Hipkins confirmed the one-way travel with low-risk Pacific Island countries such as Samoa, Tonga, Vanuatu and Tokelau – which resumed on the 8th of November 2021.

However, at the NEOC press conference this week, a focus on the burden of high costs to quarantine returning passengers raised questions that seemed to criticise those who would take advantage of this one-way quarantine free arrangement.

“Our committee has noted that there are people who come and go, or make up excuses to travel to New Zealand, and then request to return not long afterwards,” said Agafili.