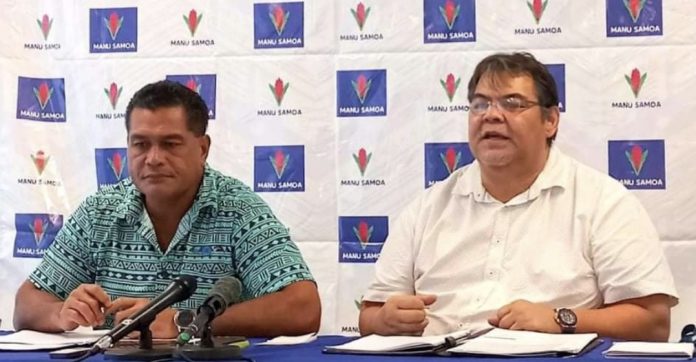 24 February 2022, Apia Samoa. Lakapi Samoa Chief Executive Officer Faleomavaega Vincent Fepulai says most of the allegations made in a players’ complaint letter alleging mistreatment were false and conflicting, however, the negative publicity has had irreversible damage to sponsorship deals.

The letter was published in verbatim by a local radio station, igniting a social media frenzy of attacks on Lakapi Samoa and the Manu Samoa 7’s Management.

“We’re glad the Manu Samoa 7’s have ironed everything out and moving forward as a team, but the negative impact of the complaint letter lingers.”

Addressing the media with Lakapi Samoa Vice Chairman Afamasaga Toeolesulusulu Rico Tupai at a press conference earlier this week, Faleomavaega said the mother union are yet to receive an official copy of the players’ letter that made serious allegations towards management.

“The letter was sent to the Pacific Rugby Players Association, then onto World Rugby, and to the media, but a copy has never officially been sent to Lakapi Samoa, even to this day,” said the Chief Executive.

Despite not receiving a copy, Faleomavaega said the Board acted swiftly to appoint a Special Committee which included a players’ representative, to determine the validity of the issues raised. He said online interviews were held with players as well as management, and according to the CEO, all parties were able to freely air their views and discuss issues.

“When asked, some of the players said they signed the letter without having read it, and some said they didn’t know the contents of the letter, and weren’t aware of some of the allegations made in it,” said Faleomavaega.

The letter alleged players were fatigued and injured from overtraining “three times a day six days a week”. It stated players were subjected to “bullying tactics and outdated training techniques” and that there was “very limited food and water” supplied to them during the covid isolation period.

Speaking about the allegations for the first time, Faleomavaega says the inquiry did not find evidence of overtraining, and allegations about food and water were simply untrue. He said many of the issues raised are internal between players and management and was pleased the team had resolved them.

“The Board has also accepted the request by four NZ based and one Australia based player to return home,” said Faleomavaega.

The CEO said publishing a complaint letter with allegations now confirmed as conflicting and untrue, has impacted negatively on the Manu Samoa 7’s team, as well as Lakapi Samoa. “It is sad, but the damage has already been done.”

The CEO says the week-long negative publicity has led to the loss of a sponsorship deal with Emirates Airlines. “That has been a direct result of the letter being published in verbatim on social media, prompting a negative public perception and damage to the Manu Samoa 7’s and Lakapi Samoa’s reputation”.

In response to players having insufficient food or water, CEO Faleomavaega said this was more about players wanting food that was not allowed by management. He confirmed players receive adequate meals in line with the team’s nutrition plan, and water is never a problem for players to access in the hotel where they are staying.

“So far we have invested around $300k tala on the Manu Samoa 7’s team in efforts to feature Samoa at the HSBC world series event. Players receive allowances and their welfare in terms of basic needs are well taken care of.”

“We can never pay the same allowances as Tier 1 nations but for our Pacific players, we hope this platform can showcase player talent and potential, and the reward is to see them graduate to professional contracts,” Faleomavaega added. “The likes of David Lemi, Ofisa Treviranus and Alafoti Faosiliva all started their professional careers with the Manu Samoa 7s”.

In response to allegations of overtraining and outdated training techniques, Head Coach Muliagatele Brian Lima played it down, saying this is not an usual response from players unable to handle training, or wanting to call-in sick and miss a training session.

He said a gradual approach was taken to get the team back into a “normal training routine” post-covid.

“The training schedule for the first week back from covid was once a day, and then on the second week we lifted it to twice a day,” he explains. “There are two days a week where yes, I do schedule a third training, usually a boxing session in the gym for the evening.”

“In any given week we schedule 10 to 11 trainings. For example Monday and Thursday – three times a day. Then Tuesday and Friday – twice a day. Then on Wednesday, either rest all day, or have one in the morning with a half-day rest. On Saturdays, either we have one training or rest, it all depends on the periodisation plan and what we want to achieve each week..”

“But no, never three times a day six days a week.”

Players alleged management had intercepted meals they had ordered to their rooms. The Head Coach said those allegations could be referring to when outside takeaway orders, and room service orders from the bar were discovered at reception. “One of our management was collecting water to take up to the players, when Reception gave him a MacDonald’s order for one of the rooms,” explains Muliagatele. “Nutrition is really important and there are certain food and drinks that are banned, and all the players know this and agree to it.”

“But that’s all part of enforcing our team rules,” said the Head Coach, “Those are just the kinds of things we deal with on tour, and it is very sad to air these in public”.

“For example we had a player who kept breaking the covid lockdown rules and he ended up getting infected again. He put himself and the other players in danger, so yeah, I had a lot to say to that player at that time.. But on tour, these players are like our own sons, so all those things are just part of living together, enforcing our rules, and learning to work with all the different personalities and upbringing,” said Muliagatele.

Lakapi Samoa announced last Friday the MS 7s team will relocate to Australia from Dubai where they will continue to train and the Lakapi Samoa Board will assess the team and management progress to decide on attending pending HSBC tournaments.