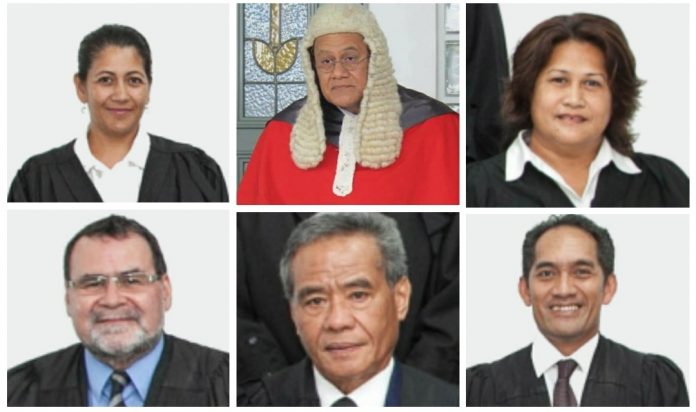 7 July 2021 Mulinuu, Apia Samoa. The Human Rights Protection Party (HRPP) has filed a formal complaint against members of the Samoa Judiciary, calling the Chief Justice ‘incompetent’ in handling cases since the beginning of electoral petitions, saying the Judiciary are on a mission to ‘oust’ HRPP from being in government, and singling out Justice Tuatagaloa for being impartial toward the leader of FAST.

The complaint letter is dated 2 July 2021, addressed to the CEO of the Ministry of Justice and Courts Administration (MJCA) Ms Moliei Vaai in her capacity as the Secretary of the Judicial Service Commission (JSC).

It is signed by Lealailepule Rimoni Aiafi, as the Secretary of the Human Rights Projection Party.

“I wish to lodge a formal complaint against members of Judiciary of the Supreme Court of Samoa, and including his Honour, Chief Justice Satiu Simativa Perese”, writes the HRPP Secretary to the JSC.

“The Hounorable Chief Justice appears to be “incompetent” in the handling of our cases since the beginning of electoral petitions. His rulings (albeit with other Judges) do not appear to be in accordance with the law, basic legal principles and well established precedent. His Honour is unlikely to be familiar with the express exclusion of “faaSamoa” and giving of money during the period of election for the purpose of influencing a voter and may also lack a general understanding of the behavior of Samoan voters during an election period and life at village level”.

Samoa’s JSC is Chaired by His Honour the Chief Justice Satiu Simativa Perese, and includes the Attorney General Savalenoa Mareva Betham-Annandale, the President of the Land and Titles Court Fepulea’i Atilla Ropati, retired Judge of the World Court Tuiloma Neroni Slade, and a member of the public, Letaa Dan Devoe.

The Human Rights Protection Party have accused the Samoa Judiciary of colluding against them, alleging the unfair treatment dates as far back as November 2019, saying “there has been a “pattern” of decisions which continually favour the FAST party”.

“Sadly, the HRPP and concerned citizens of Samoa have observed that the Judiciary appears to be colluding to oust the HRPP from being the current Government, or at the very least, to control the outcome of Samoa’s General Election”, states the three page letter.

Prior to the general election, amendments to constituency boundaries made by the HRPP-led government to the Electoral Act were challenged in Court for being discriminatory against candidates who were unable to meet the new requirements.  The Court ordered amendments to the Act be made in Parliament – a decision that then allowed Tuala Ponifasio, Papalii Tavita Moala and Lefau Harry Schuster to register in their chosen constituencies for the April 9th election.

“The close friendship of Hon Justice Mata Tuatagaloa and the leader of the FAST party is a well-known fact, yet we have refrained from making any complaints or request for a recusal from participation of Judge Tuatagaloa in these petition cases, referring to believe that her Honour will prioritise her judicial oath and act impartially”.

“With utmost respect, I appeal to your oath as Judicial Officers in ensuring that HRPP and its members are given a right to a fair trial according to Article 9 of the Constitution. I further implore the honorable judges to reconsider their positions as highly esteemed protectors of the Constitution and the laws of Samoa”.

In power for the most of the past 40 years, the Human Rights Protection Party who had predicted another landslide win of 42-9, were caught off guard when the results of Samoa’s April 9th general election resulted in an equal 25-25 seats to HRPP:FAST. When the one Independent Tuala Ponifasio moved to FAST to give them the majority 26:25, an additional HRPP woman candidate was added to satisfy a Constitutional 10% quota for women, putting Samoa into a hung Parliament situation until the Supreme Court declared the additional seat of Aliimalemanu Alofa Tuuau unconstitutional and void. The decision was later upheld by the Court of Appeal, returning Samoa’s general election results as FAST 26 to HRPP 25.

The Human Rights Protection Party have since refused to support the convening of Parliament, leading to a roller-coaster of events over the past 3 months including court cases, appeals, an almost-fresh election, an unconstitutional swearing-in ceremony, and three proclamations by Samoa’s Head of State later declared void by the Courts. All of these actions have landed in Court before the Samoa Judiciary to determine legality and constitutionality; deepening Samoa’s political crisis now going on to its fourth month. Additionally, the Supreme Court have set all work aside to hear 28 electoral petitions, more than half of the 51 elected seats.

To date, HRPP have had two seats declared void by the Supreme Court. Seiuli Ueligitone lost his Sagaga 2 seat when Independent and former HRPP Associate Minister Maualaivao Pat Ah Him petitioned him in Court for bribery, and HRPP’s Fiugalu Etauati Eteuati lost his Aleipata-Itupa-i-Lalo seat through a petition by a senior member of HRPP, Tafua Maluelue Tafua.  HRPP has also lost three more seats, when out-of-court negotiations with petitioners have led to three of the party’s winning candidates agreeing to resign.

HRPP electoral petitions against FAST candidates on the basis of campaign roadshows held prior to the general election were unsuccessful for two cases, when the Supreme Court ruled that cultural exchanges relating to the events had been unavoidable considering aspects of the faaSamoa such as tali faaaloalo – giving in response, talimalo – receiving guests into the village, and tali le faaaloalo i le faaaloalo – reciprocity.

In their letter of complaint the HRPP hits back at this stance taken by the Supreme Court, saying amendments to the Electoral Act had done away with allowing any amounts of money or food to be given, and ‘cultural gifting’ is widely banned.

“In our humble opinion, recent rulings by the Supreme Court Justices appear to be legally  flawed, are outside the legal boundaries  and without reference to well established precedent set by earlier courts relating to the offences of “treating and bribery” “intent to procure votes” and particularly the exclusion of custom and tradition relating to the giving of money to individuals and groups. Even the holding of weddings and other celebrations has been legislated against, the only exception being a candidates’ family funerals”.

“Instead new precedents have been set, paving the way for any party or individual in the future to distribute cash and food under the guise of culture and “faaaloalo i le faaaloalo”, even on the day before the election”.

The letter then goes into the detail on case facts relating to how the Supreme Court had dealt with various specific circumstances of cases, including situations where the Court did not accept evidence from voters who had sought out candidates for money prior to the election. HRPP’s Gatoloaifaana Amataga Gidlow was released of five bribery charges on this basis.

The Secretary of HRPP poses the question of whether Samoa should allow the Supreme Court to continue to interpret the law regarding to allegations of bribery and treating.

“Shall we then continue down this path of allowing the Court to determine what amount of cash are culturally appropriate in a given situation?”

“Prior to these recent decisions, no distribution of any cash, money or food drink was allowed and custom and cultural gifting was widely banned. The provision for “o’o” during the election period was revoked after Parliament determined that our cultural practices should no longer be an excuse for gift giving during an election period, except in the case of funerals, candidates and voters alike, are well aware of the legal restrictions. Now, it would appear the Courts have taken the lead in re introducing the distribution of cash and meals during the election period through the holding of village meetings, roadshows and seminars”.

Stating that their rights to a fair trial are being affected by various allegations towards the Judiciary, the HRPP claims that it is not just them, but ‘ordinary citizens‘ who are also “questioning why the Courts appear to be compromising the legal system“.

The party in charge of Samoa’s caretaker government say they are not receiving fair trials and through their Secretary, call on the JSC to consider their formal complaint as a matter of utmost urgency, confidentially and seriousness.

“If we cannot turn to the Courts for justice, where shall we then turn?”

“I thank you in advance for considering this official complaint. It is our hope that you investigate this matter impartially and with independence. We implore you to set aside any political affiliations and to deal with the facts and merits of this matter”.

“We continue to hold high regard and respect for the Judiciary. However, our party believes it is in the best interests of our country and the administration of justice for our concerns, however tenuous, to be brought to the attention of the members of the Commission and also to the notice of the Judges of the Supreme Court, including the Chief Justice”.

The letter copies in the Chief Justice, members of the Judiciary, the Attorney General, and the President of the Samoa Law Society.