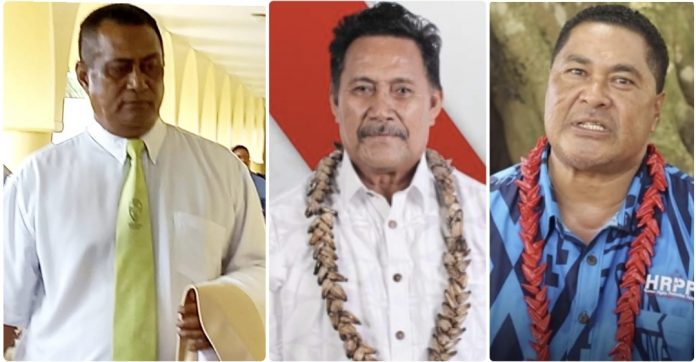 How a matai offers service to the church, has come under scrutiny before the Supreme Court this past week with a pre-election petition where one candidate is challenging the eligibility of another, with questions of whether or not service to the church is being rendered by an election candidate, and contentious arguments about the how that service is being carried out.

The 2-day hearing before Chief Justice Satiu Simativa Perese and Justice Niava Mata Tuatagaloa ended with closing submissions on Thursday. The decision, set to be delivered on Monday afternoon will set an important precedence for the application and interpretation of a recent amendment to the Electoral Act, that opened up service to the church as a way to satisfy the monotaga or community service requirement of an election candidate.

The legislative amendment to include religious service under the monotaga requirement was passed by Parliament just two months ago on the 28th of September, with Minister Fauolo Lefau Harry Schuster announcing the amendments would be applied to the 7 by-elections, now set to be held this Friday 26th November 2021.

During his address in Parliament, the Minister said the intention was to remove unnecessary hurdles to a matai’s right to register as a candidate. He also said the amendments had taken into account inconsistencies in the Electoral Act which had been highlighted by the Supreme Court during pre-election petitions.

“These amendments ensure fairness to the candidates, and considers pre-election judgments handed down by the Supreme Court that highlighted inconsistencies and areas affecting a matai’s basic right to register as a candidate,” said the Minister for the Office of the Electoral Commissioner.

With 4 more days to the by-elections set for this Friday 26th November, the eligibility of Human Rights Protection Party candidate for Falealupo, Tuitogamanaia Dr Peniamina Junior Leavai is being challenged by Fuiono Tenina Chricton of the Faatuatua i Le Atua Samoa ua Tasi party.

The FAST candidate, through his lawyer Fuimaono Sarona Ponifasio, is arguing the HRPP candidate has not rendered a service to the church in the past 3 years. The basis of Fuiono’s position, is that Tuitogamanaia, son of long serving Falealupo MP Aeau Peniamina Leavai, does not have his own matafale in the Vaotuua EFKS church at Falealupo. He further argues that as a matai, Tuitogamanaia should not rely on his father’s matafale, but rather, have one of his own. Fuiono confirmed that he does not belong to the EFKS church Tuitogamanaia and his family attend in Falealupo.

The applicant’s case was backed by several village matai, who said every matai in a congregation should also have their own matafale in the church.

Lawyer Aeau Leota Tima Leavai acting for her brother says Tuitogamanaia has been a matai of Falealupo since 2008 and a church member of the Vaotuua EFKS in Falealupo for even longer than that. She argues that Tuitogamanaia has and continues to render service to the church under the matafale of his father, Aeau Peniamaina Leavai. The basis of Tuitogamanaia’s position is that  matafale are headed by elderly parents, and it is only after they pass away, that their adult children are able to establish matafale of their own.

The repondent’s case was backed by matai and church deacons, who testified they only established their own matafale at Vaotuua EFKS after their elderly parents had passed away. They told the Court that before that, they served the church under their late parents’ matafale.

The Court heard that the applicant, Fuiono Tenina Crichton had been overseas between 2008 and 2018 and Aeau Tima therefore argued the petitioner could not have known about her client’s service to the church during that time.

The contentious issue then became the EFKS system of matafale – a formal list that dictates the coordination of all things pertaining to an EFKS congregation. Any EFKS going church member can tell you that a list of matafale is not a church membership list. The list of matafale is a list of families within a congregation. The list is used as a basis of dividing various duties within an EFKS congregation. Children are listed and presumed to come under the matafale of their parents. However, as children become adults and have families of their own, some may venture out with their spouses to establish their own matafale, thus growing the church by increasing the number of matafale. Other adult children, however, may choose to remain and continue to service the matafale of their elderly parents. All saogamea or the collection of church donations from members of the congregation, is done by matafale.

Should every matai have his/her own matafale?

Fuiono Tenina Crichton and a number of witnesses in support of his position, had taken the stand to argue that because Tuitogamanaia Dr Peniamina Leavai does not have a ‘matafale’ under his own matai title, he therefore does not render a service to the church.

Fuimaono Sarona Ponifasio as counsel for the applicant, called matai and church deacons who testified that every good serving matai in the village should have a matafale of their own. They also agreed when asked by the respondents lawyer, that the Tuitogamanaia was a matai tautua, mandated to serve the Aeau title. However they did still insist that for service to the church, each matai should still have their own matafale.

Aeau Leota Tima Leavai as counsel for the respondent called other matai and church deacons, who took the stand to state that as matai, they continued to serve their elderly parents’ matafale. They told the Court it was only when their parents had passed away, did they formally remove their parents’ names from the matafale and replace it with their own matai titles.

The EFKS Vaotuua Church Minister Reverend Namaia Kofe Tuiletufuga gave evidence in the pre-election petition on Thursday. He clarified that there are 16 matafale in his church at Vaotuua, 15 families, plus himself, makes up the 16.

Reverend Tuiletufuga confirmed to the Court that he did sign Tuitogamanaia’s nomination form to confirm his church service to the Office of the Electoral Commissioner.

“The matafale is not under his name, but he is the person we contact for saogamea, he is the one rendering the service,” testified the reverend.

Asked to state what is involved in servicing a matafale, Reverend Namaia listed the various responsibilities of a church matafale, mostly by way of financial donations.

During cross-examination Counsel for the applicant put to the Church Minister that members of his own church had earlier testified that Tuitogamanaia Dr Leavai did not render service to the Vaotuua EFKS church because there was no matafale under his name. Reverend Tuiletufuga told the Court he did not agree or accept those testimonies to be true.

The reverend also testified that Tuitogamanaia is a lay preacher in the EFKS church, and as the pastor, there have been times when he has given up his pulpit to the HRPP candidate.

“He is a Aoao Fesoasoani, and so he has been given church services to lead from time to time..”

This opened up questions as to why Aeau Tima Leavai would be asked to establish a matafale under her own name, while Tuitogamanaia, as a matai, continues to serve the matafale of his father, Aeau Peniamina.

Justice Niava Mata Tuatagaloa followed up on this issue and asked the reverend why he had given this advice to Aeau Tima.  Reverend Namaia responded that the matai title of Aeau was the highest ranking chief in the district of Falealupo, and that is why he advised Aeau Tima to move on and establish a matafale in the Vaotuua congregation, under her own name.

Does Service to the Church Stop if You Miss a Contribution

The faifeau responded that church contributions were not compulsory in nature, and depended on how much church members were able to give from to time. “E fua i le lava o le faasoa a matafale. A le lava le faasoa, e leai se mea e fai.”

He added that although Tuitogamanaia may miss some things, he would make up for it when he donates at other times.

The Reverend also spoke of the year his parish choir were invited to perform at the widely televised 13 Days of Christmas with the Vaitele EFKS. He said Tuitogamanaia led the choir through weeks of preparation and made it possible for them to attend that milestone as a congregation.

Outside Court village matai of Falealupo and members of the Vaotuua church who testified in support of the applicant were heard openly stating that Reverend Namaia Kofe Tuiletufuga, who has been serving the Vaotuua church since 1998, would be ostracized and removed as the Church Minister, should the case not go their way.

The decision of the Supreme Court is due to be handed down Monday afternoon, just four days before the by-election and two days before pre-polling is underway on Wednesday. The decision will ultimately determine if Falealupo goes to the polls or not.