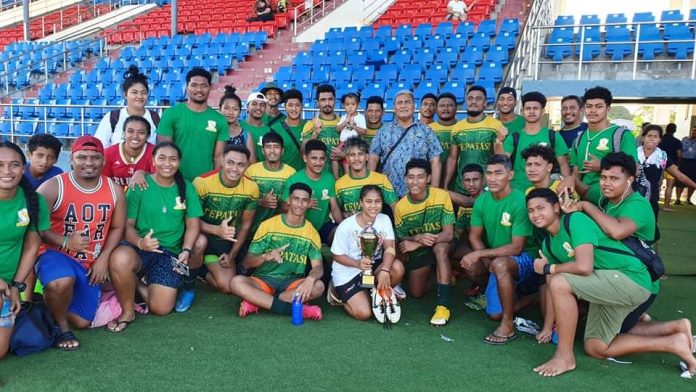 Tepatasi have taken out the second leg of the Samoa National 7’s series, defeating BBE Vaiala 28-21 in a close final at Apia Park Stadium.

Va’a Apelu Maliko, arguably the best 7s player in the country right now, put Tepatasi on his shoulders with a hat-trick in the final.

Vaiala secured the first kick-off of the match, but were unable to control the ball for long before Tepatasi forced a turnover. The ball went straight into the hands of Mr. Maliko and over he went for the first try of the final, within the first minute of play.

Vaiala did well to regain the next kick-off, but they lost possession soon after with unforced handling errors. Vaiala made up for it with some great defensive work that forced Tepatasi way back into their own half. But as soon as the ball found its way back into Va’a Apelu Maliko’s hands, he turned on both power and pace to slip through Vaiala’s own defense and strolled over the tryline to push Tepa’s lead to 14-0. Both tries having been converted by captain Iafeta Purcell.

In true “Blackie” fashion, the young side, led by boxing gold medalist Hugo Fata and Manu Samoa 7s rep David Tavita, were not going to go down without a fight.

At the next kick-off Tepatasi managed to secure the ball but Fuli Fanaufouina snatched a turnover in a tackle to give his side much needed possession.

Vaiala held on to the ball this time and a well-timed offload by Mark Tusigaigoa unleashed speedster Gerard Faalupega down the left hand side for Vaiala’s first try. The boot of Ueta Avaotuga added the two points and Vaiala were back in the match at 14-7. 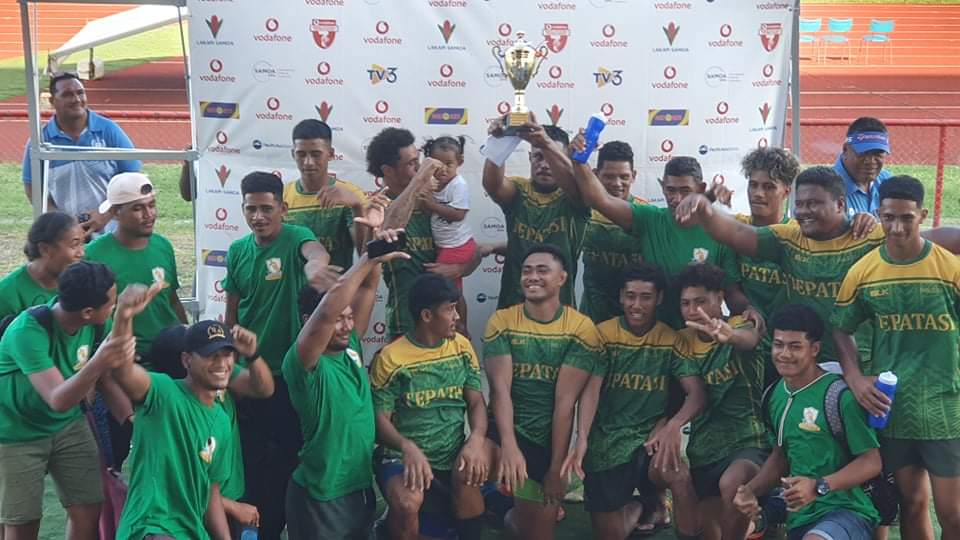 Within minutes, however, Tepa stretched the lead out once again, Reverend Malo Sefo’s boys showed a trait of their own – of never letting their guard down. At the very next kick-off Tepatasi secured the ball and handed it to Iafeta Laau who powered down the side of the field gaining a good 15 metres before popping the ball back in to find Siaosi Feagiai – who ran rings to confuse the Vaiala defense and go over the line to stretch their lead to 21-7.

Another unforced error at the next kick-off cost Vaiala possession and Tepatasi almost capitalized again before halftime.

Coached by former 7s star Alatasi Tupou, Vaiala scored first in the second half to take the match back to 21-14  but any hopes to tie up the match were disrupted by Va’a Apelu Maliko. With the ball in both hands he dummied left, dummied right and split the Red Sea between two Vaiala defenders to streak away under the post and stretch the score once again to 28-14 with a minute left on the clock.

BBE Vaiala as you would expect, didn’t stop fighting despite knowing a win was out of their reach. Malo Luteru showed impressive speed and footwork to beat several players and go over for a consolation try before the full-time hooter.

The defending National 7s Champs are now at the top of the table after registering as runners up last week, losing the final 19-7 to Ott Constructors Tama Uli.

Tama Uli were edged out by Vaiala in the semi final and the boys from Salelologa took the upset out on Lulumaivini Ulutogia in the third place final, thrashing the Aleipata side by 47-0.

To watch the action from Rounds 1 and 2, tune in to TV3 Facebook Page: https://www.facebook.com/tv3samoa or their YouTube channel.