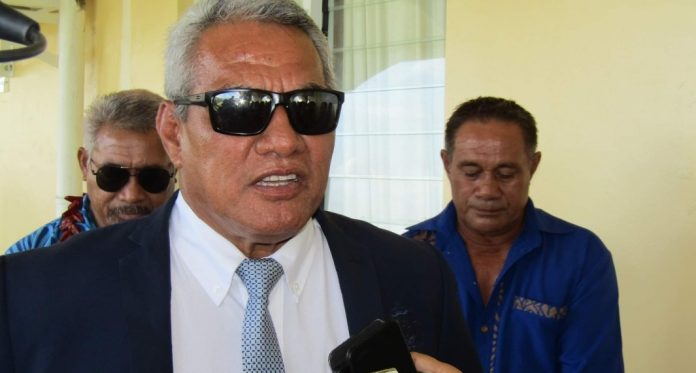 Thursday 5 August 2021, Mulinuu Apia Samoa. The former Minister of Education, Sports and Culture, Loau Solamalemalo Keneti Sio is facing four counts of bribery and one of treating in the Supreme Court, filed by election rival candidate of Sagaga No.1 constituency Papalii Tavita Moala. Papalii also faces three charges of bribery in a counter-petition filed against him by Loau.
A total of 11 witnesses were called on Wednesday to testify against the former Minister, each accusing him of giving out money to voters, particularly in the village of Aele.
Toleafoa Jeffrey Peni the Court that on the 13th of February 2021, Loau and a few matai of Faleula village held a meeting with villagers of Aele.  According to Toleafoa who says he attended the meeting, Loau and those who came with him distributed a total of $10,000 tala to villagers on that day.
“I saw Loau’s sister giving out envelopes to different matais and fuaifale of our village of Aele,” testified Toleafoa Jeffrey.
According to Toleafoa, Loau delivered a speech to the villagers of Aele, outlining all the good work that had done during his time in office.
“He said to always remember all the good work he has done for the village like the school building and the field (malae ta’alo) for the school”.
When cross examined Toleafoa was asked if he knew that Aele was a sub-village of Faleula but he disagreed and said Aele was a village under the Methodist Church authority.
Counsel put it to Toleafoa that the money was a gift, a ‘meaalofa’ for the villagers who had hosted the meeting, and not a distribution of money or ‘tufaga tupe’, but Toleafoa again disagreed and said, “no it was a tufaga tupe”.
Another witness by the name of Mareta Niko Sakaria told the court that $10,000 tala was distributed by Loau and his family to church ministers, the ‘faifeaus’ and villagers of Aele who were present at the meeting on 13 February 2021.
“He told us that we should be careful because all the FAST supporters in Aele will have nowhere to go if HRPP win again in the general election,” Mareta said.
“Ia faeteete tagata uma o loo lagolagoina le FAST i Aele aua a toe tu mai le HRPP e leiloa poo fea e o iai.”
Another witness named Faanunu Peni of Faleula testified that Loau initiated a ‘asiga’ or a visit bearing gifts to the Methodist Church President at Foga’a, Faleula in August of 2020.  She told the court that the village of Faleula would host a special visit for the Church President called a ‘laulautasi’ on rare occasions, such as after the bestowal of a new President, or if the President were to fall ill. Those are the only times, she says, where a ‘laulautasi’ would be presented.
During cross-examination it was put to Faanunu that it was Samoan tradition for village matai to visit the President when he is unwell, but according to Faanunu who stuck to her testimony, the President was not sick at the time.
The hearing continues in the Supreme Court with the counter-petition by Loau against Papalii Panoa Tavita Moala focused on three bribery charges relating to a FAST party roadshow held in Aele in March of 2021, less than a month before the April 9th general elections.
The case is in it’s third day of proceedings this morning, Friday 6, August before Chief Justice Satiu Simativa Perese and Justice Tafaoimalo Tologata Leilani Tuala-Warren.