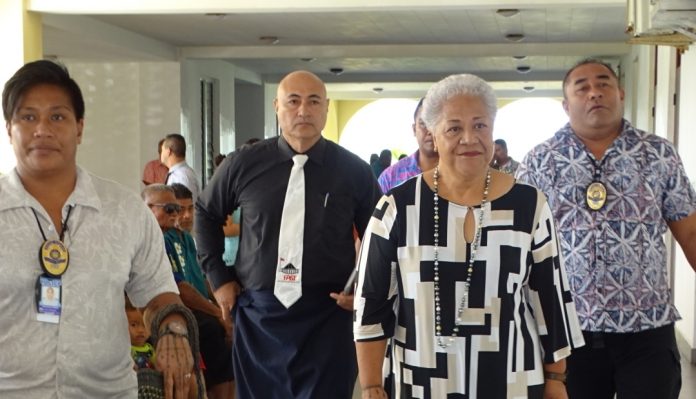 The hearing of a private prosecution alleging one count of bribery against Samoa Prime Minister Hon Fiame Naomi Mataafa has been postponed to December 2021.

In handing down the revised hearing dates, Judge Alalatoa Rosella Viane Papalii said she was reluctant to grant the requested adjournment but stated it would be issued, “in the interests of fairness and justice”.

The charges were first mentioned in Court back in May 2021. In early September the District Court of Samoa set October hearing dates for all three matters.

However in the District Court on Monday morning FAST lawyer and Queen’s Counsel Kieran Raftery, zooming in to proceedings via video link from New Zealand, applied for an adjournment.

Judge Alalatoa Rosella Viane Papalii did not hide her discontent at Mr Raftery’s late application for an adjournment, filed last Friday and received by Judge Alalatoa on Monday morning.

“I never got the memo,” stated Judge Alalatoa.. “I was only handed this (application) by my secretary this morning..”

“This is not the first time you’ve asked for an adjournment,” Judge Alalatoa tells the QC.

The District Court Judge said she had emailed all counsels involved to submit any preliminary trial issues by last Tuesday 12th October 2021.

“But that did not happen,” said Judge Alalatoa.. “I shouldn’t have had to do that, to send out a reminder noticd but I did, because I wanted to expedite these matters and make sure there were no further hiccups.”

Speaking from New Zealand, Mr Raftery explained that he had set aside Monday 11 October to consult with his three clients, however, he was not aware it was a public holiday in Samoa, and attempts to make further arrangements last week to set up online discussions with his clients were unsuccessful.

The QC said he then sought the consent of prosecuting counsel,  Aumua Ming Leung Wai, before he submitted an application seeking an adjournment.

“I was only able to speak with one of my clients, your honour.”

“I then waited to speak with Mr Leung Wai first, before filing the application”.

Judge Alalatoa did not grant the adjournment easily, explaining to the Court that all three judges involved including Senior Judge Talasa Atoa-Saaga had diaried these proceedings as set down by the Court, and were ready to hear them this week.

“Did you consider the inconvenience to the Court, Mr Raftery and the fact that we would have to reschedule dates?” said the Judge.

“Yes of course your honour, always when making an application for an adjournment we are aware of the inconvenience to the Court, that is why we are slow to make them unless it is absolutely necessary”.

Judge Alalatoa added her concern that the case was “hovering over the head” of the defendant whose rights to a fair and expeditious trial under Article 9.1 of the Samoa Constitution were being affected by delays.

The Mr Raftery QC apologised and explained to Judge Alalatoa that the application is on behalf of his clients, and therefore made with their full knowledge and consent.

Mr Leung Wai said he consented to Mr Raftery’s request for an adjournment to ensure the defendent received the best possible defense available to her as guaranteed under the Constitution.

“Your honour the charge against the defendant is very serious, that is why when I spoke with Mr Raftery last Thursday night, I consented to his application in the interest of fairness,” stated Aumua.

Judge Alalatoa, “with some reluctance” granted “the final adjournment” and set aside 13-14 December 2021 to hear the bribery charge against the Prime Minister.

A two day trial was considered necessary to hear three witnesses from prosecution, while Mr Raftery indicated defense would also have a list of witnesses although they are not yet certain how many.

The Prime Minister was uncontested at the April 9th general election, while both Faumuina Wayne and Laauliolemalietoa Leuatea registered landslide wins at the polls, where their second-placed opponent was unable to achieve the minimum half the votes required to bring a proper election petition against them.

Faumuina Leatinuu Wayne Fong secured the largest win margin of the April general elections with 1,270 votes ahead of the second-placed candidate.

Sources say the informant, Mr Peni Elikapo, is understood to have played a private investigator role for the HRPP party, to gather evidence and take witness statements for the cases.