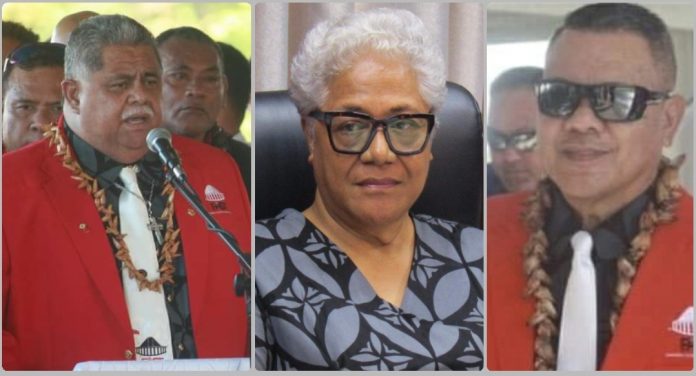 Charges of bribery and treating in relation to the recent general elections had initially involved five FAST winning candidates, filed as private prosecutions by an informant and former police officer, Elikapo Peni.

During Monday morning’s proceedings, Counsel Aumua Ming Leung Wai for the informant, put forward an application before the Court to withdraw some of the charges against the Prime Minister Fiame, as well as the FAST Party Chairman Laauliolemalietoa.

The charges withdrawn are understood to be all FAST Roadshow related accusations.

All charges against Toeolesulusulu Cedric Schuster and Laumatiamanu Mathew Ringo Purcell have also been withdrawn.

Both the Prime Minister and Minister of Agriculture now each face just one count of bribery to be heard before the District Court on the 18th and 19th of October respectively.

Faumuina Leatinu’u, however, is facing 14 charges of bribery and treating, and the Court has set aside a week-long hearing from Monday 25 October 2021.

The Prime Minister was uncontested at the April 9th general election, while both Faumuina Wayne and Laauliolemalietoa Leuatea registered landslide wins at the polls, where their second-placed opponent was unable to achieve the minimum half the votes required to bring a proper election petition against them.

Faumuina Leatinuu Wayne Fong secured the largest win margin of the April general elections with 1,270 votes ahead of the second-placed candidate.

Sources say the informant, Mr Peni Elikapo, is understood to have played a private investigator role for the HRPP party, to gather evidence and take witness statements for the cases.

FAST lawyer Muriel Lui is representing all three respondents who have pleaded not guilty to the charges against them.