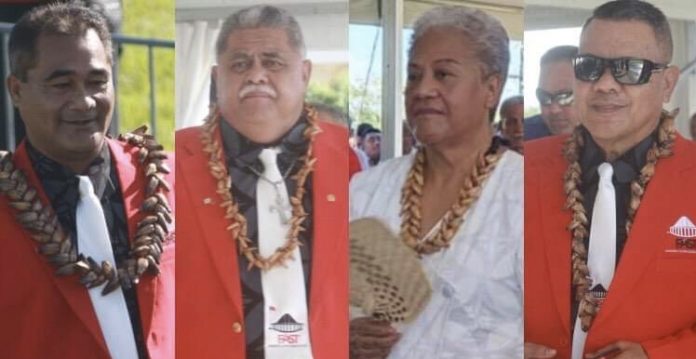 An ex-cop by the name of Elikapo Peni is the informant for all five private prosecutions against members of Faatuatua i Le Atua Samoa ua Tasi (FAST).

The allegations of bribery and treating in relation to election campaigns are proceeding as private prosecutions meaning they are not formal complaints to the police. Sources say Mr Peni is understood to have played a private investigator role for the HRPP party, to gather evidence and take witness statements for the cases.

All five Members of FAST entered not guilty pleas through their lawyer Muriel Lui before Judge Talasa Atoa-Saaga in the District Court of Samoa. The 5th member of FAST Laumatiamanu Ringo Purcell could not appear due to health reasons.

Fiame Naomi Mataafa who was sworn in as Prime Minister in a ceremony on Parliament grounds Monday evening, stood in the dock as the matter was called, as did Laauli, Leatinuu and Toeolesulusulu; all senior members of FAST named in Fiame’s Cabinet on Monday night.

Uncontested at the 9th April general elections Fiame faces two charges of bribery and treating. The Court set the 6th of September for hearing. Appearing for the informant, former Attorney General Aumua Ming Leung Wai told the Court they have 6 witnesses.

Laaulialemalietoa faces 3 charges of bribery and 1 charge of treating. A three day hearing has been set for 8-10 September 2021. Aumua told the Court there are 30 witnesses.

Faumuina Leatinuu Wayne Fong faces 14 charges of bribery and 1 charge of treating and the matter has also been set for a 3-day hearing.

Toeolesulusulu Cedric Schuster faces one charge of bribery. The lawyer for this case is Leinafo Taimalelagi and the hearing of this matter is on the 4th October.

The 5th FAST member being accused is Laumatiamanu Mathew Ringo Purcell facing 1 charge of bribery. For this case the lawyer standing for the informant is Leiataualesa Jerry Brunt. The hearing has been set for the 13th of November 2021. Laumatiamanu was an unsuccessful candidate, coming in second to Nonu Teo Lomialagi of HRPP.

Faumuina Wayne and Laauliolemalietoa Leuatea registering landslide wins at the polls, where the second-placed opponent was not able to get half their votes and be eligible to bring election petitions against them.

Faumuina Leatinuu Wayne Fong secured the largest win margin of the 9th April general elections with 1,270 votes ahead of the second-placed candidate.

Founded by Laaulialemalietoa, the newly established FAST party edged out the 40 year dominant HRPP at the April 9th  general election by 26-25 when Independent Tuala Iosefo Ponifasio switched to FAST.

HRPP are refusing to convene Parliament without the decision on an appeal to a Supreme Court decision that ruled out an additional woman candidate.

If the appeal is successful Aliimalemanu Alofa Tuuau becomes a 52nd MP creating a deadlock that will return the nation to the polls. If the appeal is unsuccessful, FAST maintains their majority of 26-25.

Meanwhile the uncertainty in Samoa continues as the 45 days mandated by the Constitution for Parliament to convene expired on Monday 24th May 2021.

FAST members on the basis of Supreme Court Orders, held a session of Parliament on the eve of Monday 24 of May 2021, to swear in their 26 elected Members and elect FAST leader Fiame Naomi Mataafa as Prime Minister. Caretaker Prime Minister Tuilaepa Dr Sailele Malielegaoi says the swearing in was unlawful, and he and his Cabinet remain in power.