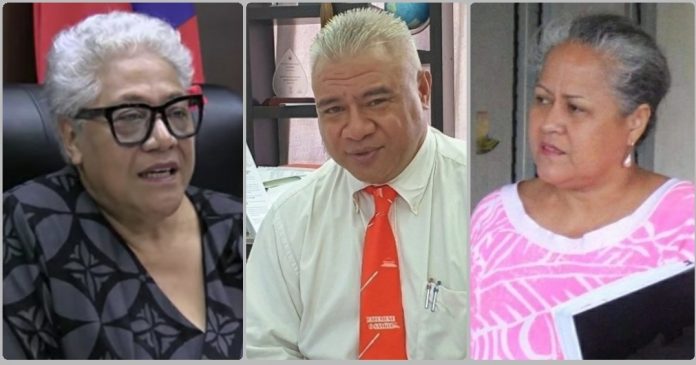 26 August 2021 Apia Samoa. Samoa Prime Minister Hon Fiame Naomi Mata’afa has again confirmed “no confidence” to be the reason behind the suspension of two top government officials, saying they are both named in a pending Contempt of Court case filed by the Faatuatua i Le Atua Samoa ua Tasi (FAST).

Attorney General Savalenoa Mareva Betham-Annandale and the Clerk of the Legislative Assembly, Tiatia Lima Graeme Tualaulelei were both suspended last Friday 20 August 2021. The Prime Minister in a press release issued last Saturday confirmed both suspensions and said Savalenoa and Tiatia have been given two weeks to respond to reasons outlined in their respective notices.

The Prime Minister was speaking at her weekly post-Cabinet press conference on Wednesday when she conveyed that the main issue concerning the top officials, was that the Office of the Attorney General and the Office of the Clerk of the Legislative Assembly, are both respondents in a Contempt of Court case. The FAST motion asks the Court to hold persons in contempt for not attending the Court-ordered opening of Parliament on Monday 24th May 2021, after the Head of State issued a writ to suspend the opening of Samoa’s XVIIth Parliament.

“They have both been named as parties to the pending contempt of court case, and because FAST is now in leadership, that makes things very difficult.”

Fiame said it is difficult to work together with officials when things that have happened, gives cause to her Cabinet to lose confidence in the senior officials.

“The suspension of the AG and Clerk of the House was mainly because there is no confidence in working with them anymore,” said Fiame.

In an interview with the Newsline, AG Savalenoa Betham Annandale questioned process being taken by Prime Minister Fiame Naomi Mata’afa in the events leading up to her suspension.

“The professional way is to call me in and inform me officially of the concerns before handing me the letter;

“Why can’t they bring up whatever they are unhappy about with the CEOs and discuss it openly and then advise them appropriately,” AG Savalenoa told Newsline.