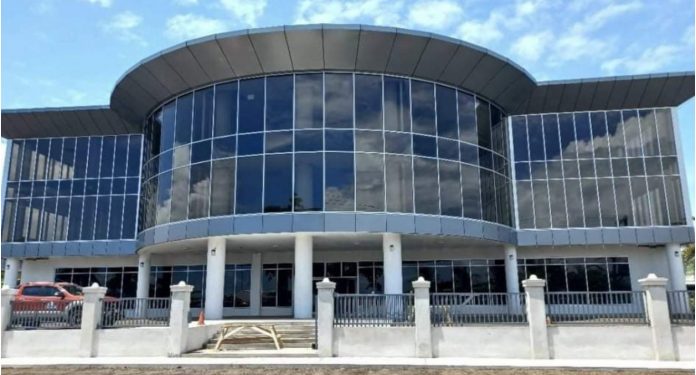 The completion of the Worship Centre Christian Church building may be pushed back a little due to delays in shipments of imported materials, but should still be ready within the first quarter of this year.

In an interview with Mr Byron Bartley of Ah Liki Construction, the Project Manager confirmed the Worship Centre Church building has taken two years to construct, as per the terms of their contract.

“Most of the materials are imported and there have been challenges with delays in shipments due to the global pandemic,” he said.

The spectacular building spans 65 meters in length from the front to the back, and 15 meters in height with a floor area of 2,500 square meters.

A sneak preview into the building shows a stadium-like set up with a descending seating  arrangement, in three large sections that are separated by isles, with the audience facing a grand stage.

There is an upper level behind the seating area where there are two rooms; one specifically fitted with a state-of-the-art PA and sound system, and another room fitted for filming and editing. Both rooms are walled with glass to allow technicians and workers an 180 degree view overlooking the stage.

Behind the stage facing the audience seats, there are three large movie theatre-sized screens.

The building also has an elevator that leads up the third level. The third level is designed for office and conference space.

“The building is designed to be fully sound proof.” says the project supervisor.

Mr Bartley says that as the lead contractor, Ah Liki has worked closely with local sub-contractors who have completed areas such as the air-conditioning system, tiling, electrical and plumbing work.

Established in 1997, the church’s website states their vision is from the Lord and led by the Holy Spirit. The Worship Centre Christian Church in Apia Samoa is headquarters to the Worldwide Church founded by Apostle Viliamu Mafoe. The Church has established international branches and congregations in a number of countries around the globe, pastored by Samoans for Samoans living abroad.