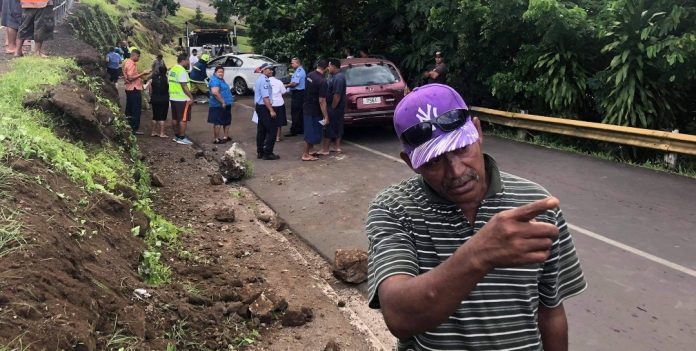 Just after 5pm as commuters headed home from work, the Magiagi hill got blocked off to await the towing of a police motor vehicle flipped over to its side in the middle of the road.

The driver and 3 passengers who were in a second vehicle seen parked next to the police car, say they were lucky to have escaped unharmed, and with minimal damage to their car.

They were travelling from the Vaivase-tai road and when they reached the Stop sign infront of the Vaai store, they saw the police car a fair way along the road coming from Faatoaia.

“We could see the police car, he was quite a distance away.. there were no other vehicles, so we continued and headed down the hill..

“So we slowed and as we stopped, the vehicle flipped and chipped the front part of our car before it landed on its side,” the man from Vaiusu explains.

The Police officer was alone in the vehicle. The rock wall along the side of the Magiagi hill road was visibly damaged at the spot witnesses say, the police car had crashed into.

Police confirmed both drivers were tested and returned negative on alcohol.

FESA arrived and ensured the safety of the flipped vehicle, and were seen sweeping away debris. Urle’s tow truck arrived and  cleared the road before 6pm.

Close to 60 people were lined up along the top of the hill with front row seats as Police and FESA investigate, and the tow truck cleared the road .

Police Commissioner Su’a Fuiavailiili Egon Keil says he is awaiting a full report a the accident.