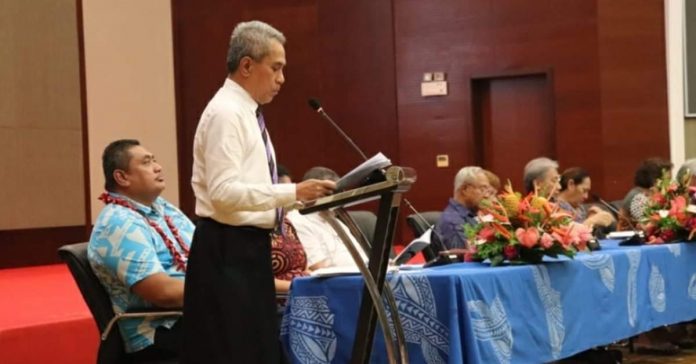 The tenth Annual General Meeting for Unitholders invested in the Unit Trust of Samoa was held at the Tuiatua Tupua Tamasese Efi (TATTE) Conference room on Friday, 26th of February 2021.

This was a memorable occasion as it also celebrated ten years since the Trust was established back in July 2010.

Unitholders residing overseas and in Savaii also participated in the AGM through interactive livestreaming; the UTOS team using innovative technology so Samoans abroad could actively participate and voice their opinions during the meeting.

Chief Executive Officer for UTOS, Tevaga Viane Tagiilima welcomed the Honourable Finance Minister, the Trustees of the Trust, members of the Board of Directors of the UTOS Management Company and fellow unitholders present at the meeting.

Taito John Roache, one of the Trustees and a director of the Tafailagi Trustee Company Ltd then proceeded with the opening remarks.

Speaking on their critical role of independence and duty to protect all investments and other properties of the Trust on behalf of the unitholders, Taito also ensured Unitholders that relevant transactions and reports carried out last financial year were in compliance with the provisions of the Master Trust Deed 2010, Amending Deed 2017 and the Act.

He firstly introduced the three new board members for UTOS and spoke on key achievements and accomplished by the Unit Trust of Samoa for the last five years such as the increasing numbers of new unitholders from 1,763 in 2016 to 3,299 active unitholders as at 30th June 2020.

This is a significant growth in comparison to the 200 unitholders who first opened their accounts with the Trust back in 2010.

The initial unit price when UTOS first opened was .97 sene and it has grown to $1.69 to date; therefore the original price has nearly doubled.

The Unit Trust of Samoa has contributed to the Samoan economy since its establishment ten years ago, through dividends paid by UTOS to its unitholders.

A total of $30.3million tala has been paid to its Unitholders for the last ten years with 82% of this amount or $25 million tala declared within the last five years. Furthermore, the last financial year was the first time ever an interim dividend was declared and paid out in the history of UTOS of $2.9 Million tala to its unitholders.

The Finance Minister also informed unitholders on the growing investment portfolio of the Trust and the Government’s plans to provide opportunities to ensure that UTOS continues to grow for the benefit of all Samoans.

Hon. Sili Epa Tuioti was pleased to state that Samoa High Commission chancery in Wellington New Zealand has now commenced construction this year with UTOS financing this project at an estimated total cost of $25 million tala.

He then used the opportunity to sincerely thank all unitholders for their continuous support by investing in UTOS at these unprecedented times. He also thanked the current Trustee, Chairman and board of directors for the Management Company as well as management and staff for their good work over the last financial year. The Finance Minister then proceeded to officially open the tenth AGM for Unitholders.

The Chairman of the Board of Directors of the UTOS (Management) Company, Afoa Asiata Kolone Vaai, was then appointed by the Trustee to chair the meeting. Afoa highlighted UTOS’ foray into advance technology to meet its social objective to ensure inclusivity of all unitholders whereby for the second time during an AGM Unitholders residing overseas and in Savaii can now view and participate in the AGM though interactive livestreaming.

With border restrictions unitholders no longer have to travel to Apia for the AGM but can access the meeting by direct livestream from the conference room and at the same time raise any concerns they may have regarding the Trust performance.