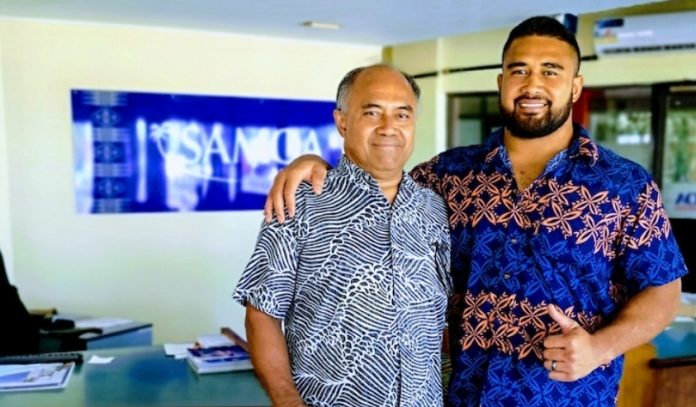 Press Release, Samoa Airways. It’s not every day that an All Black rugby player walks into the Samoa Airways travel office unannounced to the surprise and delight of staff and customers.

After paying a courtesy visit to the nation’s leader earlier this month, All Black prop, Nepo Eti Laulala made a similar but less formal call-in at the Samoa Airways head office.

The 28 year old was there to visit the airline’s most experienced pilot and General Manager of Operations, Captain Eti Laulala – simply known as ‘Dad’ to the 26-capped All Black.

“My Dad loves what he does and flying means the world to him – I’m very proud of him,” says Nepo

Captain Etil Laulala started his flying career in 1987 for a small airline in American Samoa before taking a pilot position in 1988 with Samoas national airline, Polynesian Airlines at the time. He worked for Poly until they ceased international flights in 2005.

Growing up, Nepo recalls the sacrifices his Dad made to follow his passion of flying while raising his family.

“I remember my Dad had to move a lot around the region as a pilot;

“It was really good to see the airline open up their international flights again because it meant Dad could be based back in Samoa with my mum. It’s so good to see him happy and when he’s happy – we’re happy.”

Captain Laulala spent the last decade flying for different Airlines in New Zealand and Papua New Guinea but he always hoped to return and fly for Samoa’s own international airline again, so when Samoa Airways announced their comeback in 2017 – it was music to his ears.

“The first time I flew the Samoa Airways aircraft to Auckland on her maiden voyage – it was such a great moment” Captain Laulala said.

“I got the opportunity to do my Samoan PA’s and I’m sure it made a difference for our people to hear the PA in Samoan. Flying into Auckland, using the Polynesian name on the radio tto air traffic control – that was a really special moment bringing back a lot of memories for me.”

Nepo is one of eight sibilings, made up of seven brothers and one sister and says a few of his brothers like Counties Manukau player Luteru and former All black Casey Laulala had planned to train as pilots but ended up pursuing professional sports instead.

However one sibling has emerged from the Laulala clan to carry on their father’s aviation legacy and younger brother Nepo couldn’t be prouder.

“My only sister is the one who has followed in my dad’s footsteps and she’s flying for Air New Zealand;

“We are all really proud of her – especially my Dad.”

Meeting Captain Laulala’s high expectations is a tough act to follow but it’s one way to keep Nepo focussed on striving for excellence and rising above challenges like when he made a stunning comeback after a crippling knee injury in 2016 to making the 2019 Rugby World Cup squad.

“He’s a hard man to please but it’s all with good intentions” said Nepo “Dad just wants to push us to be the best that we can be. He’s a man of few words – you can see it when he’s disappointed and when he’s happy, this just pushes me harder to see that smile on both him and mums faces.”