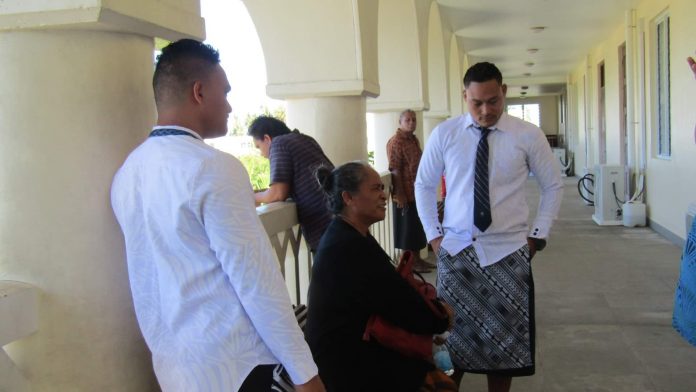 Three men from Leauvaa pleaded not guilty to murder charges relating to an incident that left one man dead by the side of the road on Mother’s Day Sunday in May last year.

A close family member had told Samoa Global News at the time that the deceased man was Michael Mikaele Tia, a father of two also from Leauvaa.

It is alleged that the alcohol related incident led to a disagreement between the young men and the deceased was found by the side of an inland road the next morning.

Two of the men are brothers Paulo Luutiga and Atapana Luutiga who are being charged with Palemia Togiai who is their best friend.

Outside Court, the boys’ mother told Samoa Global News that Palemia was Atapanas best friend from Don Bosco whom they had taken in as their own.

The incident last year had led to the parents of Paulo and Atapana Luutiga taking a formal traditional apology to the family of Mikaele Tia.  Family members say that the the four young men involved in the tragic incident grew up together and are all close friends.

“The family came with a ifoga at around 4 o’clock in the morning, with the parents of the brothers in custody kneeling beneath the traditional fine mat or ietoga”.

This week, Atapana Luutiga was represented by Afa Lesa while his brother Paulo was given a chance to seek legal representation. Paulo Luutiga had been represented previously by Loau Donald Kerslake who was this month inducted as a Judge of the District Court.

The three men are remanded on bail, signing in each week at the police station to await the Court hearing set for 31st August 2020.