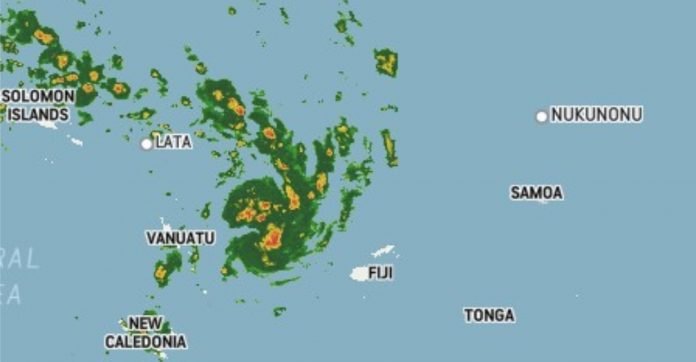 Tropical Cyclone Yasa is the first tropical cyclone of the season moving across the South Pacific, between Fiji and Vanuatu.

The Fiji Met Office and Nadi Tropical Cyclone Warning Centre predicts the Category 1 storm to develop into a Category 3 by the end of the week, and to remain in its current location between Fiji and Vanuatu.

“The forecast path shown above is the Nadi’s best estimate of the cyclone’s future movement and intensity. There is always some uncertainty associated with tropical cyclone forecasting and the grey zone indicates the range of likely tracks”.

Nadi predicts TC Yasa to develop into a Category 3 by the end of the week:

The Fiji Met Office says there is no forecast of where the system might be making a landfall.

According to AccuWeather Senior Meteorologist Jason Nicholls, the low began developing near Samoa last week, and then drifted by Thursday to its location to the northwest of Fiji.

Nicholls says, “It is possible for Tropical Cyclone Yasa to continue tracking to the southwest early next week and eventually bring more significant impacts to Vanuatu and even New Caledonia.”