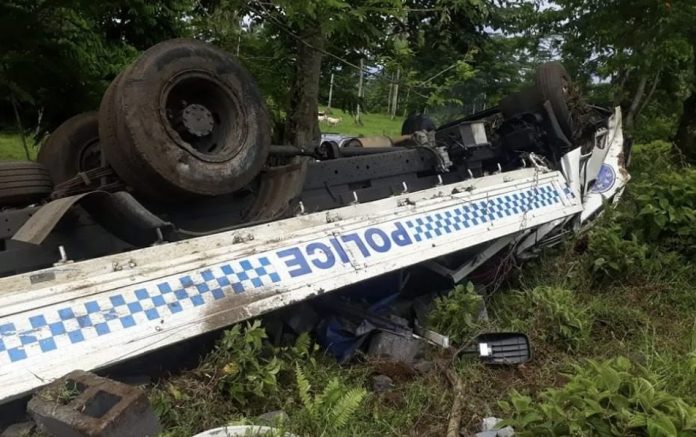 A dyna truck that lost control Tuesday afternoon along the Tiavi Cross Island Road has claimed three lives and left one in critical condition.

Deputy Police Commissioner Auapaau Logoitino Filipo confirmed at about 2:50pm Tuesday afternoon, that two members are in hospital, with one in critical condition.

“They are civilian members of our Ministry, on the way to the Poutasi Outpost,” said Auapaau.

A member of the National Hospital’s Emergency Department (ED) confirmed doctors are working on two men from the accident.

Samoa Police, Prisons and Correction Services (SPPCS) have confirmed  that the dyna licensed #POL 81 lost control on the slippery roads and overturned.

“We can confirm that three members of our Assets Division have passed away with one currently in critical condition..

“We ask the public for your understanding whilst we are dealing with this tragic incident.
SPPCS will provide information in due time to answer any queries regarding this matter” reads the statement.

A video clip posted on social media by witnesses shows members of the public trying to move the bodies of two men believed to have been seated at the back of the dyna. Passing vehicles are seen stopping and taking some to the hospital.

“Two of the men died at the scene,” said one witness. “We tried to help but it was too late”.

“Our team removed one of the victims stuck underneath the dyna,” said the Fire and Emergency Services Commissioner.

A video that has gone viral on social media shows members of the public and nearby villagers trying to break into the dyna, in desperate efforts to try and save the driver, who was trapped in the truck and could not move.

The Civilian Members of the Samoa Police service were delivering a truckload of supplies and materials to the Poutasi Police Outpost, when the tragic accident happened.

Our thoughts and prayers are with the members of Samoa’s police service and their families.