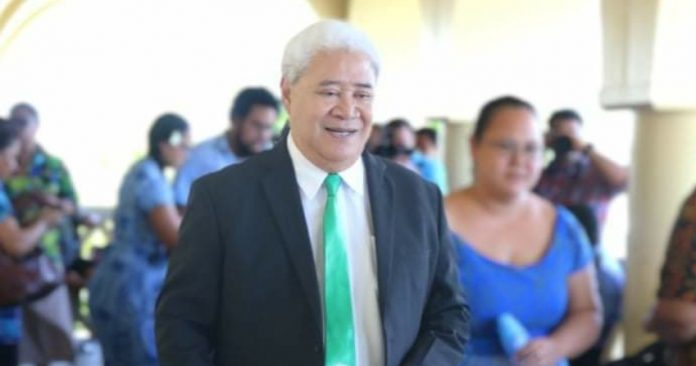 Leader of the Tautua Samoa political party took the witness stand this afternoon to give evidence against incumbent FAST MP for Salega 1, Fepuleai Faasavalu Su’a.

Seated in the witness stand, Afualo spoke passionately, alleging the FAST party had engaged in “corrupt and illegal” practices that upset him so much he could not sleep at night.

“I am the leader of Tautua Samoa Party and these are practices that we are just not allowed to do. To give money as a way of bribery and corrupt practices and then say it was an expression of appreciation is wrong,” said Afualo. “There was no money whatsoever used by any of our candidates during our campaign”.

Afualo told the Court that the FAST Party had given out money during a roadshow held in the village of Fogatuli the month before the April 9th general election. The second incident referred to by Afualo was against FAST party leader, Hon Fiame Naomi Mataafa, for attending a Sunday church service in Samata-i-Uta on Easter Sunday 2nd April, 2021. Afualo alleges Fiame attended with Friends of Fiame supporters group, and gave a donation of $2,000 tala to the church women’s committee (mafutaga a tina) and $500 to the church youth (autalavou).

Afualo said he had sleepless nights thinking about the unfairness of what he says are illegal acts that greatly affected his election result.

“I usually get more votes in Samata-Uta, but this is the first time the numbers of votes I got did not reach 200. I only polled 144 there,” he added.

“That is not legal and I don’t know why Fiame and her supporters attended a church service in Samata-i-Uta,” he added.

The results of Salega 1 was the closest of the April 9th general election. Afualo polled a total of 373 votes, just 8 votes behind Fepuleai Faasavalu who won with 381 votes. Afualo was actually third, with Toomata Aki Tuipea of HRPP coming in 2nd with 375 votes.

When cross-examined by Muriel Lui representing FAST, Afualo said he was not present at the church service or the road show, however, he told the Court he was able to follow, watch and observe it all on social media.

Muriel Lui put it to Afualo that the monetary gift “meaalofa” was not given by Fiame, but rather, by “Friends of Fiame”.  Afualo responded that he believed this was still inappropriate, “e lē talafeagai”.

Ms Lui also put to Afualo that the practices were in line with Samoa’s customs and traditions, to reciprocate “respect with respect”, because the church had accepted Fiame and her friends to the Easter service, and the mafutaga a tina had presented traditional faaaloaloga to Fiame and her group.

Afualo alleged FAST had given $2,000 tala to four villages of the constituency that were present during a roadshow held in his constituency. An act he says, was wrong and unfair because Tautua Samoa had stuck to the rules.

“We, the Tautua Samoa party and all our candidates made sure we upheld the rules as set out by the Electoral Act, and we made sure that no money at all was used during the campaign period,” said Afualo.  “I had money too, but I did not use it,” he added.

“This is why I am so disappointed and wanted to go ahead with the case even though the constituency all the matais of Salega came to me requesting I withdraw my petition; but I wanted to pursue this because what the FAST Party did was not right and unlawful,” he added.

The first to take the stand today, Afualo told the Court he has witnesses who were present at both the church service and the FAST roadshow who are going to testify.