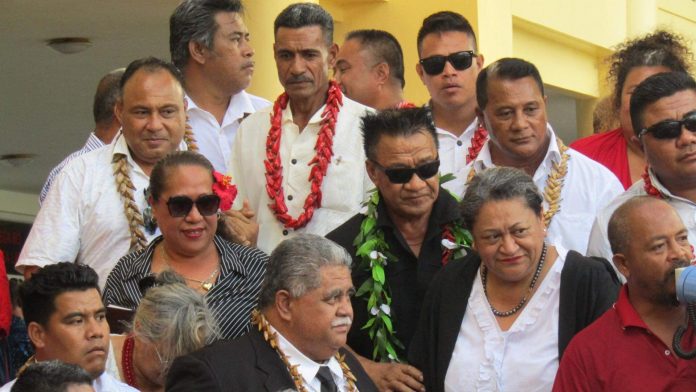 The Supreme Court this afternoon has ruled against a writ issued by the Head of State Tuimalealiifano Va’aleto’a Sualauvi II – to revoke the recent national election results, and direct the nation to return to the polls this Friday 21st May 2021.

Chief Justice highlighted that there was no lawful basis on the Head of State calling a fresh general election set for the 21st of May 2021 and the writ issued was not based on any legal authority and is therefore void.

“This Court has obligations to maintain the rule of law and protect the principals and rules of the Constitution,” Chief Justice Satiu reiterated.

Chief Justice Satiu Simativa Perese in delivering the judgment highlighted the matter as an historical event after 60 years of independence and sovereign governance, Samoa’s Constitution now faces testing within the Supreme Court.

The Court, however, noted that they do consider the Head of State has acted or did anything other than what he believed to be the best outcome for Samoa.

He referred to the writ of the 4th of May 2021 when the Head of State called for fresh general elections based on the information that there was no clear majority to form a government; and where it was in the public interest to do so.

The Chief Justice did not read out the full 28-page decision, however, he summarised the ruling to a packed Courtroom of red-uniformed FAST supporters.

The Court also upheld the results of the 9th April 2021 General Election and declared the write associated with the official results as still valid.

Furthermore, the Court called on the Head of State to call a meeting of the Legislative Assembly within 45 days, or this Friday 21st May 2021.

“We respectfully tender our view and judgment that the Head of State does not have the power to call for a fresh election as he did on 4 May 2021, for 21 May 2021.

“Accordingly, we make the following declarations:
1. There is no lawful basis for the Head of State calling for a new election on 21 May 2021;
2. The writ issued under s.52 of the Electoral Act 2016, is not issued under any legal authority and is accordingly void;
3. The declarations made above mean that the result of the April 2021 General Election and the relevant writs associated to the results continue to be valid and lawful;
4. The Head of State’s attention is directed to the requirements of the Art 52 and the Head of States obligation under the Constitution to call a meeting of the Legislative Assembly within 45 days of the holding of a General Election”.

The Supreme Court of Samoa then also made a recommendation for the Office of the Head of State to be properly resourced with independent staff in view of the importance of its constitutional role in Samoa.

“Finally, we note that, arising from this constitutional issue, it may be timely for the office of the Head of State to have access to publicly funded but independent staff and resources, including legal advisors.

“In the 21st Century the burden of the Office has greatly increased. Much of the work of the office is concerned with implementing the Government of the days’ advice, and in that regard it is appropriate for the Head of State to receive advice from the Attorney General, Art. 41(2); however, we consider that it would be prudent for the Head of State to have available extra support staff particularly when the need arises”.

As widely reported, the challenge was made by the Fa’atuatua i le Atua Samoa ua Tasi Party, Fiame Naomi Mata’afa and others representing FAST member declared MP’s after the April 9th elections, Luatua Semi Epati as a citizen who wanted to run in the fresh elections but cannot, and two voters Toleafoa Afamasaga Fa’amatala, Saina Tomi Seti, who describe their efforts to vote last time and how they will be inconvenienced should there be another election. The three respondents were the Office of the Electoral Commission, the Office of the Attorney General and the Human Rights Protection Party.

The full Judgment can be read by clicking here.