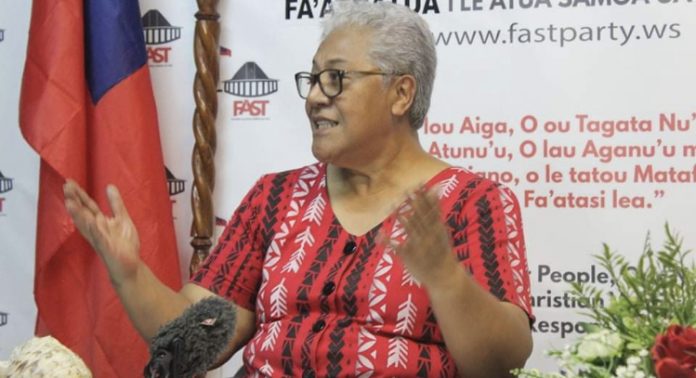 Public servants continue their work in Apia – despite the political impasse and confusion over who really holds power.

“Our system here in Samoa is not a dictatorship. It’s a democratic state. But he’s behaving as though this is a dictatorship,” the Prime Minister elect said.

She believes Tuilaepa is pushing the boundaries in the hope the public will “rise up” and he can hold onto power.

“That’s not how it works and I’m sorry that it’s gotten to that point. I think he’s going to be very disappointed. Samoan people are not foolish people,” Fiame said.

On the Government of Samoa Facebook Page, where Tuilaepa is posting video updates, the public comments vary from the supportive to the frustrated.

However, another commented: “You are not even following the rule of law.”

“No one believes you anymore uso. Stand up and move away from that chair,” a fourth person said.

Fiame says Tuialepa has been a respected leader both domestically and internationally – but having to physically remove him from office is a possibility.

“As someone who worked with him for many years, I hope it doesn’t come to that.”

At government buildings in Apia, public servants are still turning up to work, but the security situation has changed.

“It was quite fun for our team to visit. Yes, there were police officers – more than usual at different levels of the five levels of our government building,” Samoa Global News Editor Tuiloma Sina Retzlaff said.

Fiame said, “I would like to encourage the Samoan people and our friends not to feel despair. I believe that we can come through this.”

Get through it yes – but Samoa could be facing many more weeks of confusion.

“The one certainty that I think our country is looking to is the judiciary,” Retzlaff added.

The Judiciary has put all regular cases on hold while it works through various election issues, including more than 20 petitions from both sides alleging corruption and bribery.