Manu Samoa Head Coach Mapusua Seilala Mapusua has named 13 new caps to take on the Maori All Blacks and Tonga in July.

In a team that mixes newcomers with experience, Mapusua has also called back veterans Jack Lam, TJ Ioane and the Crusaders stand-out prop, Michael Alaalatoa also named as captain of the Manu Samoa.

Of the 13 New Caps, former New Zealand U20 representatives Sam Slade and JP Sauni are the notable mentions. Sam Slade is currently playing the Mitre 10 tournament for Counties Manukau while JP Sauni plays his footy in Australia.

Manu Samoa 7’s stars Alamanda Motuga and Tomasi Alosio, who represented Samoa in the Moana Pasifika All Star team last year, have been included in the squad.

The only four locals are players who have moved across from the Manu Samoa 7’s. Former 7’s star Johnny Vaili who has faced recent disciplinary issues with the Moataa rugby club has convinced Mapusua he deserves the call up, as have household names Elisepeta Alofipo and Joe Perez. Theordore MacFarland of SSAB Moamoa Roosters who had been training with the Samoa 7s squad looks to make his Manu Samoa debut with the 15’s instead. The double international has also represented Samoa in basketball, and makes up the 4th local in the squad.

With the first five-eight position being a high talking point in Samoa rugby in recent times, Mapusua has put his faith in former Auckland Mitre 10 player, D’Angelo Leuila. Leuila made his Manu Samoa debut at the age of 19 kicking 20 points for Samoa in a test match against Canada in 2016.

The match against Tonga will also be a 2023 Rugby World Cup qualifying match as both teams look to try and avoid the repechage tournament.  Manu Samoa will face the Maori All Blacks on the 3rd of July as a curtain raiser to All Blacks vs Tonga. Samoa will then play Tonga two weeks later on the 17th of July at FMG Stadium, Waikato. 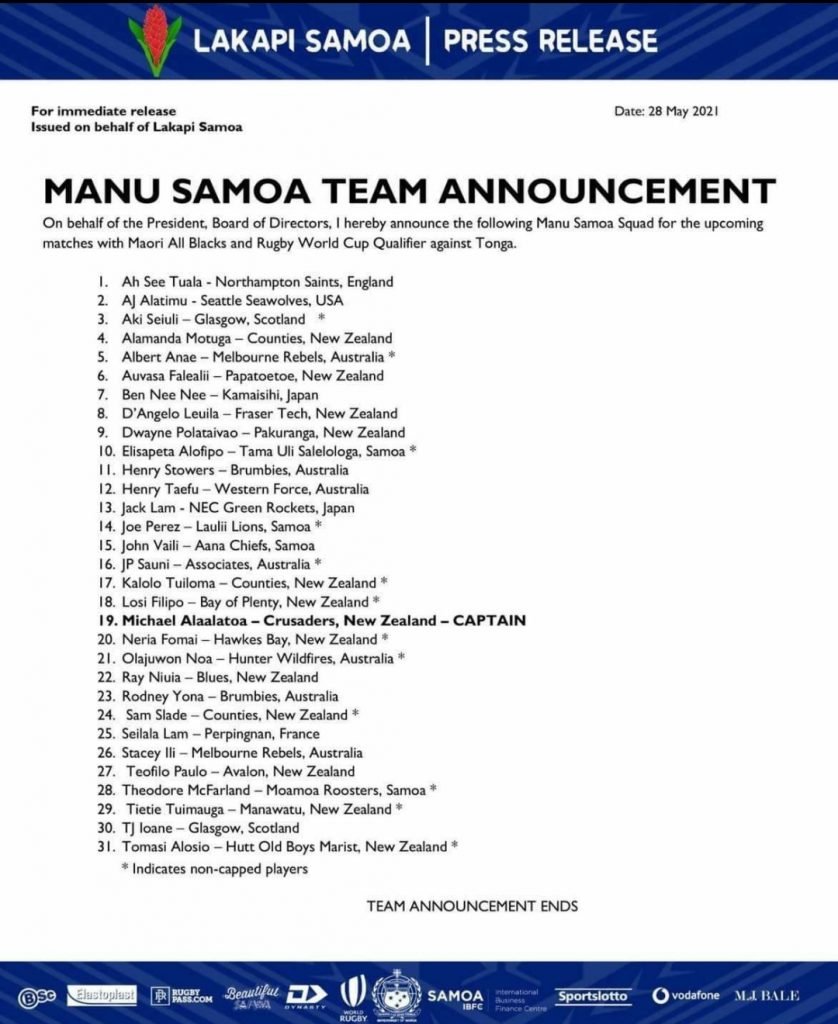