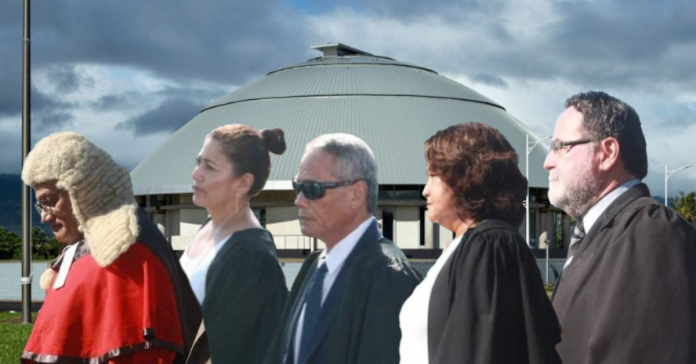 IN THE SUPREME COURT OF SAMOA
HELD AT MULINUU

AND: THE ATTORNEY GENERAL  appointed under Article 41 of the Constitution and named on behalf of the Head of State and of the executive government of the Independent State of Samoa
First Respondent

Counsel:  B. Heather-Latu & G. Latu for the Applicants

[1] This Court convened a special hearing on Sunday 23 May 2021 to hear an urgent application by the applicants for the certification of orders made by the Court in M. 120/21 and 121/21 FAST and another v the AG and another and the making of other interlocutory orders concerning a Proclamation issued by the Head of State on Saturday night 22 May 2021.

[3] The Court, being the Judges and staff, is also classified as an essential service pursuant to the current State of Emergency Orders of the Government of Samoa, and the Supreme Court has an inherent jurisdiction to act to promote the ends of justice. The Court is also empowered by section 32 of the Judicature Act to sit “in any part of Samoa and at any time or place”.

[6] We consider that 20 May 2021 Proclamation satisfied the Head of State’s obligation under Art 52 of the Constitution which relevantly provides:

[7] However, for some reasons at this point still unknown, the Head of State issued another Proclamation two days later, on 22 May 2021:

PROCLAMATION FROM THE HEAD OF STATE

I TUIMALEALIIFANO VA’ALETOA SUALAUVI II, HEAD OF STATE pursuant to my authority as the HEAD OF STATE OF SAMOA including Article 52 of the CONSTITUTION OF THE INDEPENDENT STATE OF SAMOA, I HEREBY SUSPEND my PROCLAMATION FOR THE OFFICIAL OPENING OF THE XVIITH PARLIAMENT date 20 May 2021 until such time as to be announced and for reasons that I will make known in due course.

[8] As is evident, the 22 May 2021 Proclamation purported to suspend for an indefinite period, the earlier Proclamation of 20 May 2021, in the face of the time running out for the meeting of the Legislative Assembly within the prescribed 45 day period, without reasons being given.

[9] The lawyers acting for FAST and others sent to the Registrar copies of their urgent without notice ex parte application early on the morning of 23 May 2021. The email attaching FAST’s application was sent out at 6.54am.

[11] When a Court proceeds on a ‘Pickwick basis’ it does so in order to “prevent imminent mischief and irremediable harm ” (see Pickwick International Inc Ltd v Multiple Sounds Distributors Ltd [1972] 3 All ER 384). The Court does so in situations which are time sensitive and where urgent redress is being sought to prevent irreparable and uncompensatable damage.

[12] The application was called in Court for Chambers so the audio recording facilities of the Court, not available in Chambers, could be used. In all other respects, it was a Chambers hearing and no one other than the court staff and Counsel were present.

[13] When the matter was called, Ms Heather Latu and Mr Latu appeared for the Applicants. The Attorney General appeared and advised the court that she did not appear for anyone but only appeared as a courtesy to the court. After an exchange with the Bench, the Attorney elected to leave and did not use the opportunity afforded by the Pickwick service to listen to the application and to make submissions as appropriate to advance the interests of her clients, the Government and the Head of But she was given every opportunity to do so which is why the Court ordered copies of this ex parte application be provided to her. Not ‘served’ as she maintains because of course documents cannot be formally served on a Sunday as per Rule 26 of the Supreme Court (Civil Procedure) Rules 1980.

[14] We note that the Attorney filed a notice of opposition later on the evening of 23 May 2021. However, by that time, the Court had already granted the orders sought, with a minor amendment to one of the orders which we will discuss below.

[15] The Court when it delivered its decision advised that it would give its reasons as soon as it These are those reasons.

[17] The Certificate of Judgment is an uncontroversial matter — it is simply the perfecting of the judgment delivered on 17th May 2021. Judgments are normally perfected, by being sealed or certified under Court Seal. The Registrar was directed to sign the certificate.

[18] The consequential orders granted were:

i. A permanent Order that the Proclamation of 0 le Ao o le Malo/the Head of State, Tuimalealiifano Va’aleto’a Sualauvi II, on Thursday 20 May 2021 for the first sitting of the 17th Parliament of Samoa on Monday 24 May 2021 is made in accordance with the requirements of Article 52 of the Constitution of the Independent State of Samoa and the declaration in paragraph [94](4) of the judgment of this Court on 17 May 2021, is of lawful effect; and

ii. An interim Order that any purported revocation of that Proclamation dated 20 May 2021, including the Proclamation made on 22 May 2021 is inconsistent with the declaration in paragraph [94](4) of the judgment of this Court and Article 52 of the Constitution of the Independent State of Samoa, and is thereby unlawful and of no effect, until further order of the Court.

iii. A permanent Order that the Clerk of the Legislative Assembly be served immediately with a copy of this Order. The Registrar was also directed to bring the Orders to the immediate attention of the Head of State and Attorney General.

[19] The amendment to the application for consequential orders concerns order number (ii). The Court considered that this order should be made on an interim basis; in the event the Head of State wished to apply to have the order set aside, an opportunity which was lost when the Attorney General left the hearing.

[20] As it transpires, an application to set aside the interim order was filed on 25 May 2021. The Court will consider this application which has been overtaken by events, in due course.

[21] The seriousness of the issue of the 22 May 2021 Proclamation suspending the meeting of the Legislative Assembly cannot be overstated. The Head of State on 20 May 2021 had ordered that Parliament be convened in accordance with the Constitution, steps required to be properly taken by the Constitution following a general election. As a constitutional issue, the Court is bound in accordance with its sacred duty to uphold the Rule of Law and the Constitution of the Sovereign and Independent State of Samoa to promptly meet and consider whether the Head of States purported suspension of a Proclamation properly and lawfully made by him two days earlier was lawful.

[22] It is accepted that in the ordinary course of events, the Court does not sit on a Sunday, and the rules provide that service of a document cannot be made on a Sunday.

[23] However, we were of the firm view that the importance of the constitutional issue and the urgency of the circumstances called on the Supreme Court to sit and consider the application as a maintenance of the rule of law issue.

[24] Furthermore the Attorney General was served on a Pickwick basis so that her high office had a chance to become fully aware of the ex parte application and appear, and hopefully provide constructive submissions. The Court wished and needed to hear from the Attorney General, but she declined the opportunity relying on procedural rules; we consider such reliance completely missed the point — Samoa was on the verge of entering a new legal and constitutional space. The Court needed to consider whether there was a proper basis for the suspension of the clear requirements of the

[25] In the end, we had little option in the absence of the Attorney General and reasons from the Head of State but to consider this issue from the inferences that could be properly drawn from the Proclamation document itself which purports to rely on the Constitutional authority of the Head of State and Art 52 itself. We also had the benefit of submissions from Ms Heather Latu, the longest serving former Attorney General.

[26] We consider that the purported suspension is unlawful for the following reasons:

i. The suspension purports to countermand a lawfully made Proclamation in pursuance of the Head of State’s Constitutional obligation to call Parliament to meet not later than 45 days after the holding of a general election (Art 52 Constitution);

ii. The purported suspension is indeterminate. The convening of the Legislative Assembly cannot be left until someone decides that it is time for Parliament to meet, whenever that may be;

iii. The purported suspension was made without any reasons or explanation. We consider this is inconsistent with the degree of transparency necessary to guard against an arbitrary and improper exercise of power, a matter which applies to these types of discretionary decisions. This is particularly acute in the case of sensitive political situations such as that which has arisen;

v. Art 52, which is relied on does not give the Head of State the power to avoid or disavow the Constitutional obligation to call Parliament to meet not later than 45 days after a general election.

[28] We note as we have in the earlier decision in M.120/21 and M.121/21, that we do not make any criticism of the Head of State, or attribute to him any malevolence; it is clear that he has been poorly advised, and then left undefended before the Court.