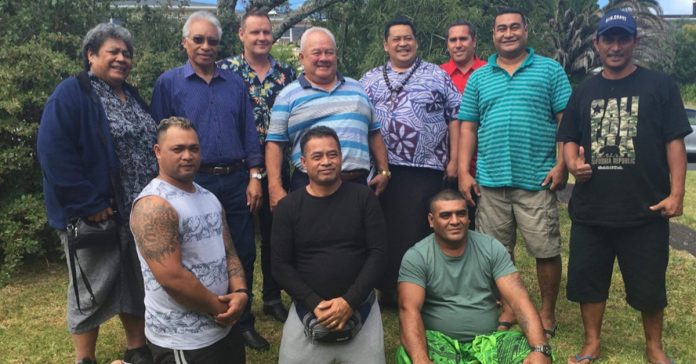 The Hon. Lautafi Fio Selafi Purcell, Minister of Commerce, Industry and Labour (MCIL) is joined by Samoa’s Trade Commissioner Magele Mauiliu Magele, Pulotu Lyndon Chu Ling, CEO MCIL, Lemalu Nele Leilua the Samoa Liaison Officer who currently resides in Hastings and MCIL staff as part of the Ministerial and Secondment initiative funded under the Toso Vaka o Manu programme by the Ministry of Business Innovation and Employment (MBIE). Samoa Airways Marketing Manager, Mailo Tautiaga Senala is also part of the delegation to promote Samoa Airways as an alternative airline for employers. The Ministerial/Secondment is an annual event that enables Samoa to visit and observe the operation and management of the Regional Seasonal Employer (RSE) as well as the Pacific Trades Partnership (PTP) scheme particularly in the construction industry. The visit comprises of site visits to farms in Bay of Plenty, Hawkes Bay, Marlborough and Nelson where Samoan workers are employed. The visit also facilitates the opportunity to dialogue with existing and potential employers to further strengthen and promote genuine partnerships for the scheme. Furthermore, the delegation was hosted by MBIE to meet and dialogue with other agencies of NZ that play an important role to the schemes.

The Hon. Minister and delegation met with a newly deployed team that arrived in NZ on Thursday 31st January as semi-skilled workers under the PTP. The team of five were visited at their three-bedroom home in North Shore Auckland. In 2016, Samoa was one of three countries piloted countries for the Canterbury Rebuild employing semi-skilled workers, today Samoan workers are recruited by companies such as Downer, Tradestaff and Success Group in the trades industry. The Minister acknowledged and commended the Tradestaff Company for extending its recruitment to Samoa and look forward to building a solid relationship under the PTP scheme.

Similarly, the Hon. Minister and delegation excitingly observed and met with workers at Mr Apple, Johnny Appleseed, Thornhill Viticulture and Horticulture Labour Specialists, Landstaff, Burdhurst, Vailima Orchards, Tasman Bay Berries, Alapa Viticultural Services Ltd, Haywood Orchards while they were harvesting. It was also a delight for the delegation to be visited by a team from Turner & Growers.

The Hon. Minister spoke openly to all the teams about making a positive impact and that their performance will determine the possibility of recruiting more from Samoa. He urged the workers to use this opportunity to enhance their knowledge and skills and to remember the reason they had applied, and to set goals for themselves. In addition, the Minister stressed that it only takes one person to spoil everything and that they must refrain from alcohol, drugs, and family influence that may distract them from their work instead, to always remember the reason they are in the programme.

The delegation also met with employers to discuss how both sides could make the program more effective and efficient.

A meeting was held between the Hon. Lautafi Fio Selafi Purcell and the Hon. Minister of Immigration Hon. Ian Lees-Galloway to discuss amongst many issues including; the possibility of opening the cap, and other matters relating to advancing of the scheme in Samoa, such as the review of the RSE programme and strengthening of specialized trainings to further improve the quality of our seasonal workers in other skills upon their return.

It was made known during a meeting with the Pacifica Labour & Skills Manager for the MBIE, Mr George Rarere that Samoa is now ranked 2nd in terms of number of workers deployed under the RSE scheme. Furthermore, congratulated Samoa as the first sending country to deploy a female, Maaola Fiupepe under the PTP scheme. This is an achievement and a true reflection of the collaboration between the employers, workers, government and private agencies that work effortlessly to ensure we make the most of this valuable opportunity. The RSE is a strong contributor to the horticulture and viticulture industry and it is envisaged that Samoa will continue to grow with the quality of workers that are being recruited.

The delegation has travel to Tauranga, Napier, Hastings, Wellington, Blenheim and Nelson before heading back to Samoa on Saturday 16th February.