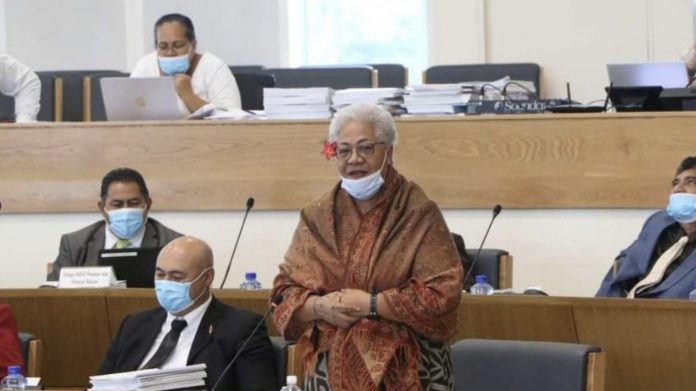 21 January 2022, Apia Samoa. The Government of Samoa has indicated that a travel ban may be imposed on all flights from Australia following the arrival of 10 covid-positive passengers on a repatriation flight from Brisbane on Wednesday 19th January.

Prime Minister Fiame Naomi Mataafa addressed the Parliament of Samoa on Thursday evening after an emergency meeting of Cabinet to consider an update report from the National Emergency Operations Centre (NEOC).

The Prime Minister told Parliament that a temporary ban to flights from Australia may be imposed “at this time” as Australia’s efforts to control the spread of the omnicron variant is monitored.

Prime Minister Fiame assured the Legislative Assemby and the nation that there was no need to panic. “Our government and frontliners continue the work that they have been doing over the past two years, to protect Samoa and its borders”.

The ten passengers who returned positive tests at Faleolo International airport upon arrival included 4 children aged between 11 months and 5 years. They are being monitored at a special isolation ward at Motootua National Hospital, while nine of their close contacts are under quarantine at Faleolo District Hospital.

The Director General of Health Leausa Dr Take Naseri confirmed to media that there were 267 passengers on the original flight list received by Samoa’s Department of Health.  Due to Samoa’s strict pre-departure protocols, only 73 were able to board the Brisbane flight.

A Department of Health report states that Australia recorded 44,622 new cases in the past 24 hours, with over 513,000 active cases – over 5,000 of those in hospitals across the country.

Australia’s National Cabinet met on Thursday 20th January 2022 to discuss their response to COVID-19 and the Omicron variant, focusing on approaches to test, trace isolate and quarantine including the use of rapid antigen tests (RATs), the vaccine rollout and booster programme, a Government media release states.

Australia’s Chief Medical Officer, Professor Paul Kelly, provided an update on the spread of the Omicron variant, confirming that “Omicron shows greater infectivity than the Delta variant, but with much less severity in terms of hospitalisations, ICU and ventilated patients”.