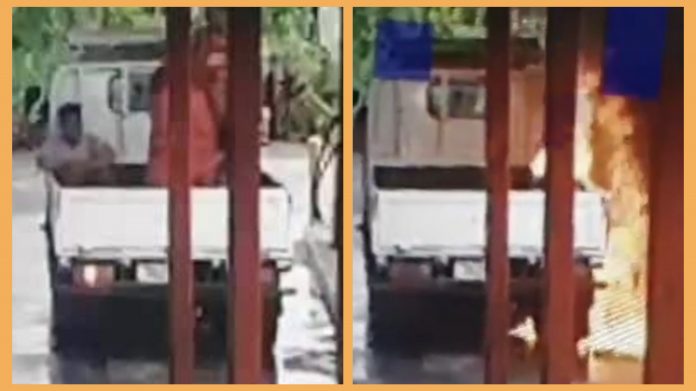 28 February 2022, Apia Samoa.  Police have arrested a 17-year-old boy in connection with a fire that destroyed a petrol station at Saanapu in the south west of Upolu, on Friday afternoon.

Security camera footage that has been shared widely on social media, shows a white truck parked up to one of the petrol pumps. A fuel station staffer is seen filling up a bottle (fagupa’u) with petrol from the pump. The bottle was being held by one of the young men sitting at the back of the truck.

An alleged act by one of the youth seen sitting at the back of the dyna truck, in a split second, caused a blaze of fire to flare up, quickly catching fire to the pump and its surroundings.

Just before the blaze, the youth can be seen reaching across towards the fagupa’u being filled.

Police and FESA (Fire and Emergency Services Authority) responded to the incident and conducted investigations over the weekend.

Deputy Police Commissioner Auapaau Logoitino Filipo confirmed the youth has been charged with intentional damage and will be retained in custody until he appears in Court on the 15th of March.

“We have conducted our investigations into that incident. Police find the act to have been deliberate and a 17 year old youth from Siumu has been charged,” said DC Auapaau.

The petrol station at Saanapu provides a valuable service to commuters along the Main South Coast Road of Upolu, where there is no petrol station for miles.