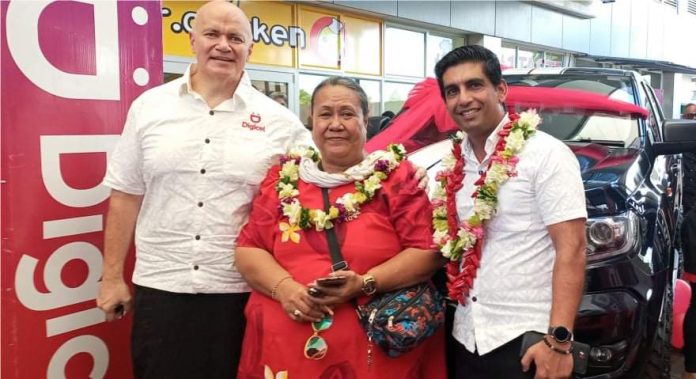 A 64 year old mother of Leulumoega-Tuai village is the happy winner of a pimped Ford Ranger valued at $150,000 tala with Digicel’s Gift Your Aiga promotion drawn this morning at the SNPF plazza. 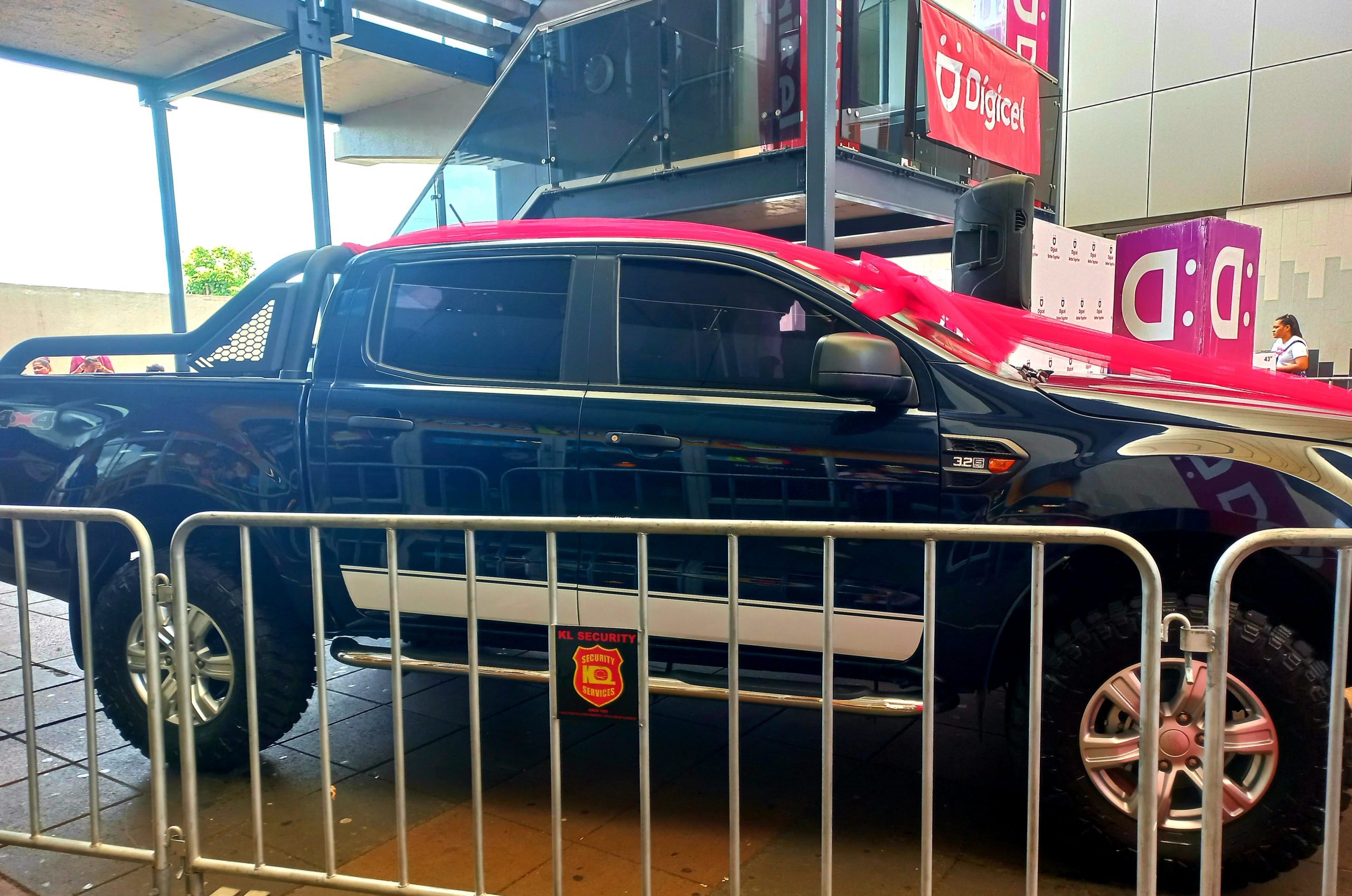 Tiresa Mataafa and her husband, Reverand Sui Samoa Mataafa are pastors of the “Taulogologo o le Upu a Le Atua” church at Leulumoega-Tuai. She says her family could never own a brand new vehicle like this, and thanked Digicel for the opportunities like this made possible through their promotions.

Digicel’s Head of Corporate Affairs, Toalepai Waikato Lefale Fatu hosted the event that saw finalists of the promotion and Week 10 winners seated at the centre of the SNPF plazza. Toleapai read out a set of instructions that kept the crown on the edge of their seats, leaving the winner of the grand prize to be a announced as a surprise at the end. 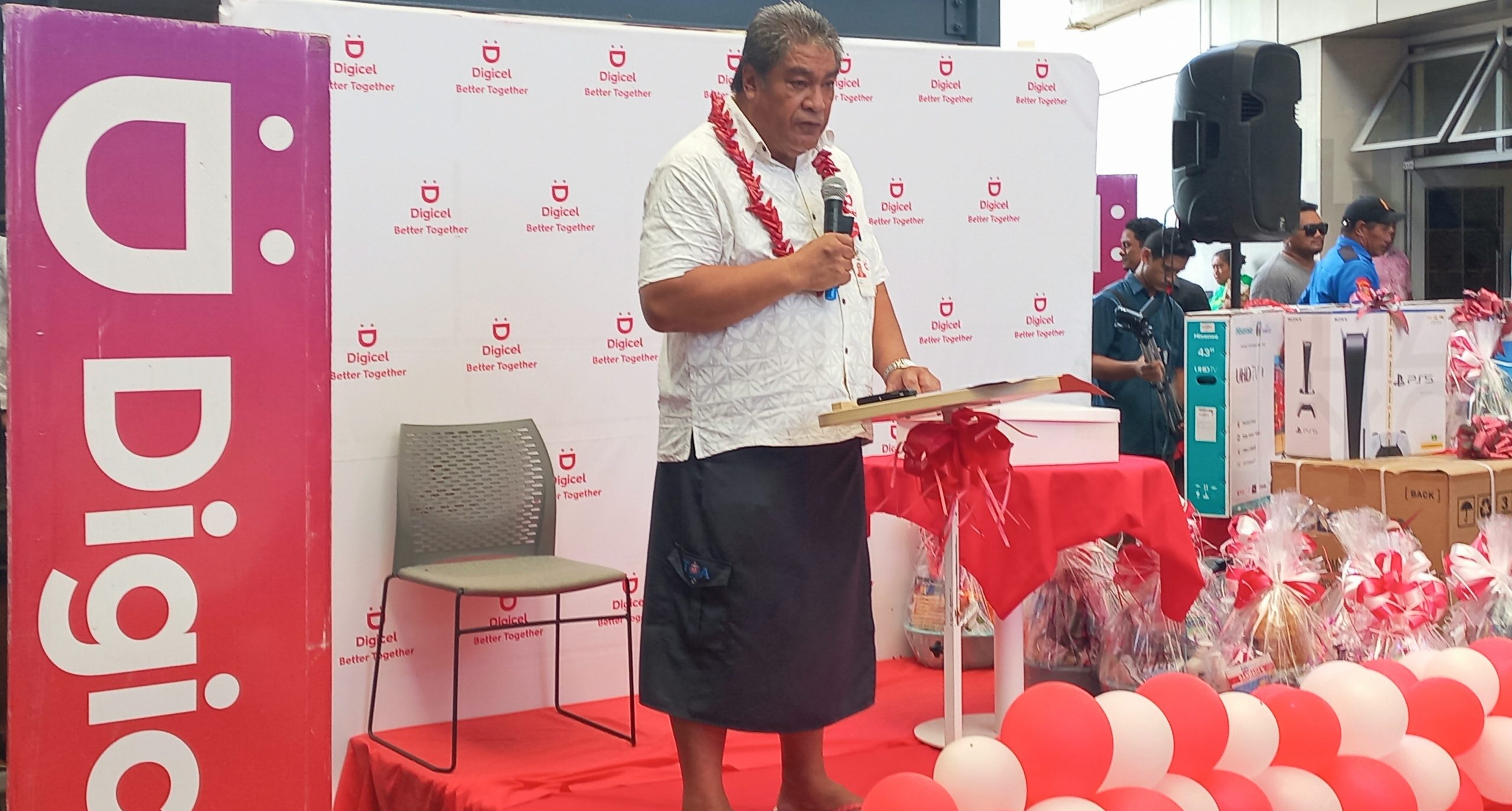 Finalists were asked to reach back and open envelopes sellotaped to the back of their chairs. Once opened, they were all told to hold up a piece of paper that showed what they had won. 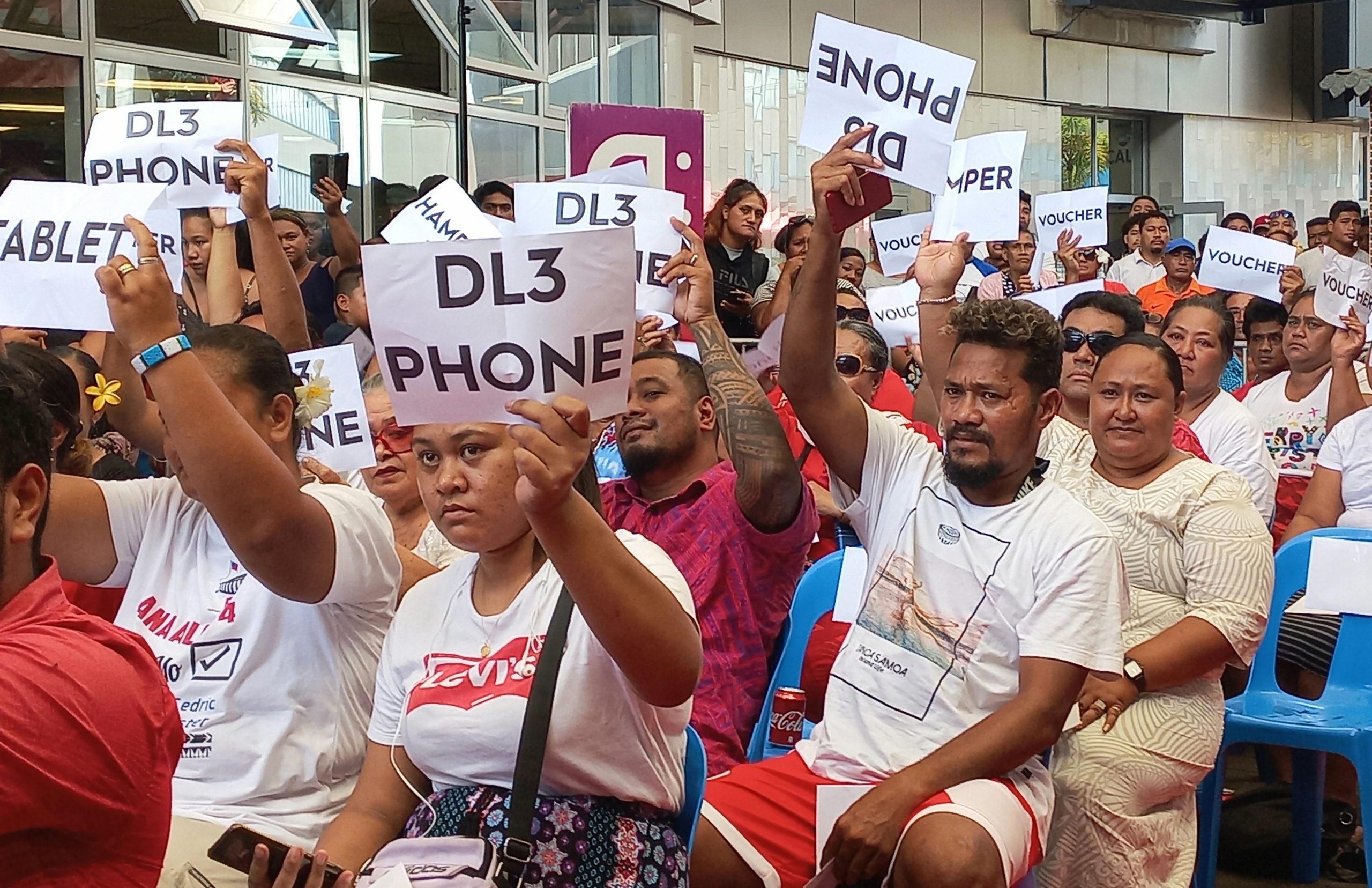 The faletua was asked to come up and cut a large red velvet sheet cake, to be shared amongst all the participants and guests.  As Tiresa cut the cake, she came across a small box that had been placed inside the cake. Toleapai told Tiresa that her gift for the day was inside the small box.  To her delight, when she opened the box, the keys to the pimped Ford Ranger was inside it. 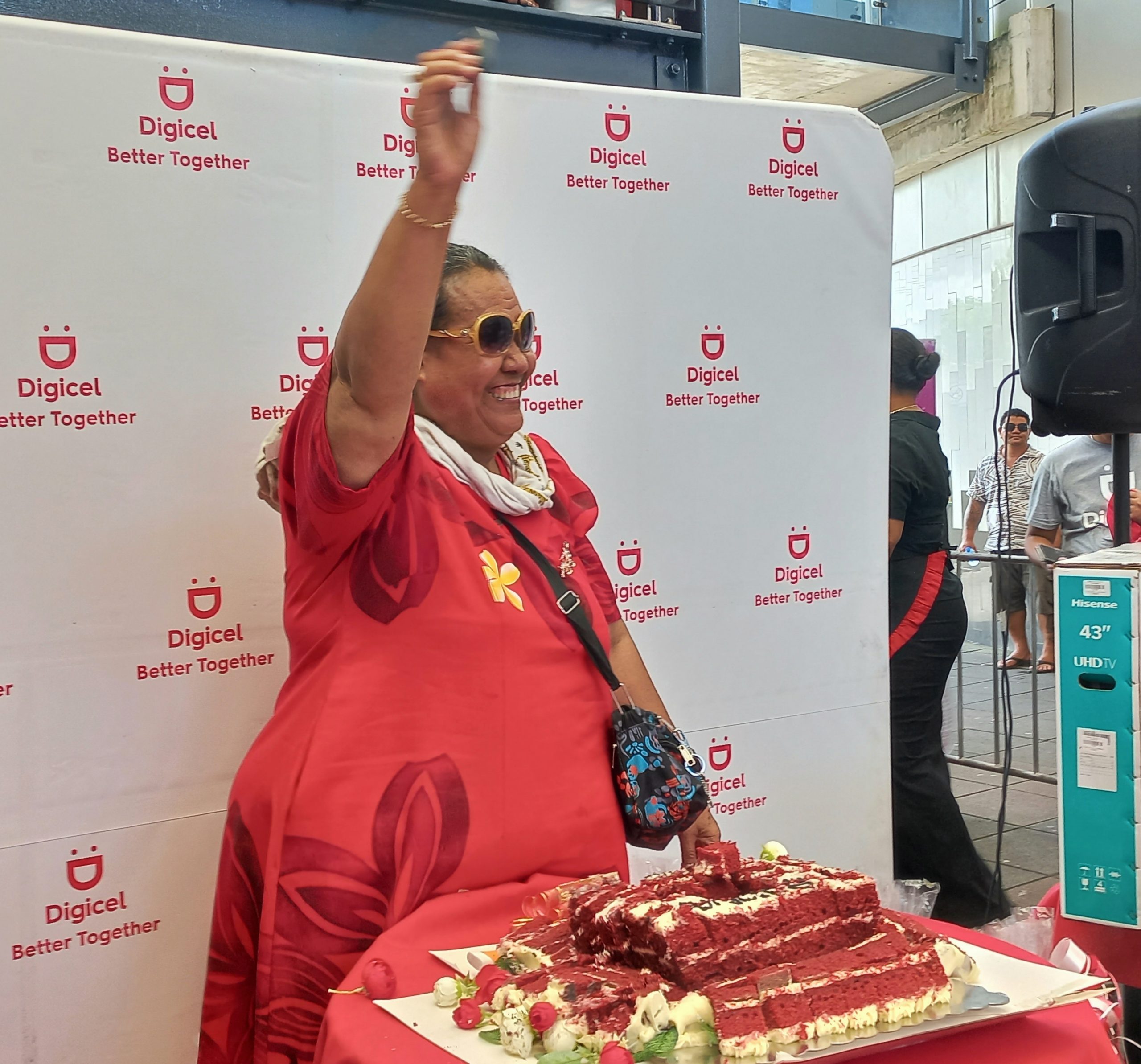 She lifted it up as the crowd cheered and clapped to congratulate her.

“You are the winner of the Gift Your Aiga a pimped ford ranger promotion, a brand new Ford Ranger with a cost of $150,000.00,” announced Toleapai Waikato. 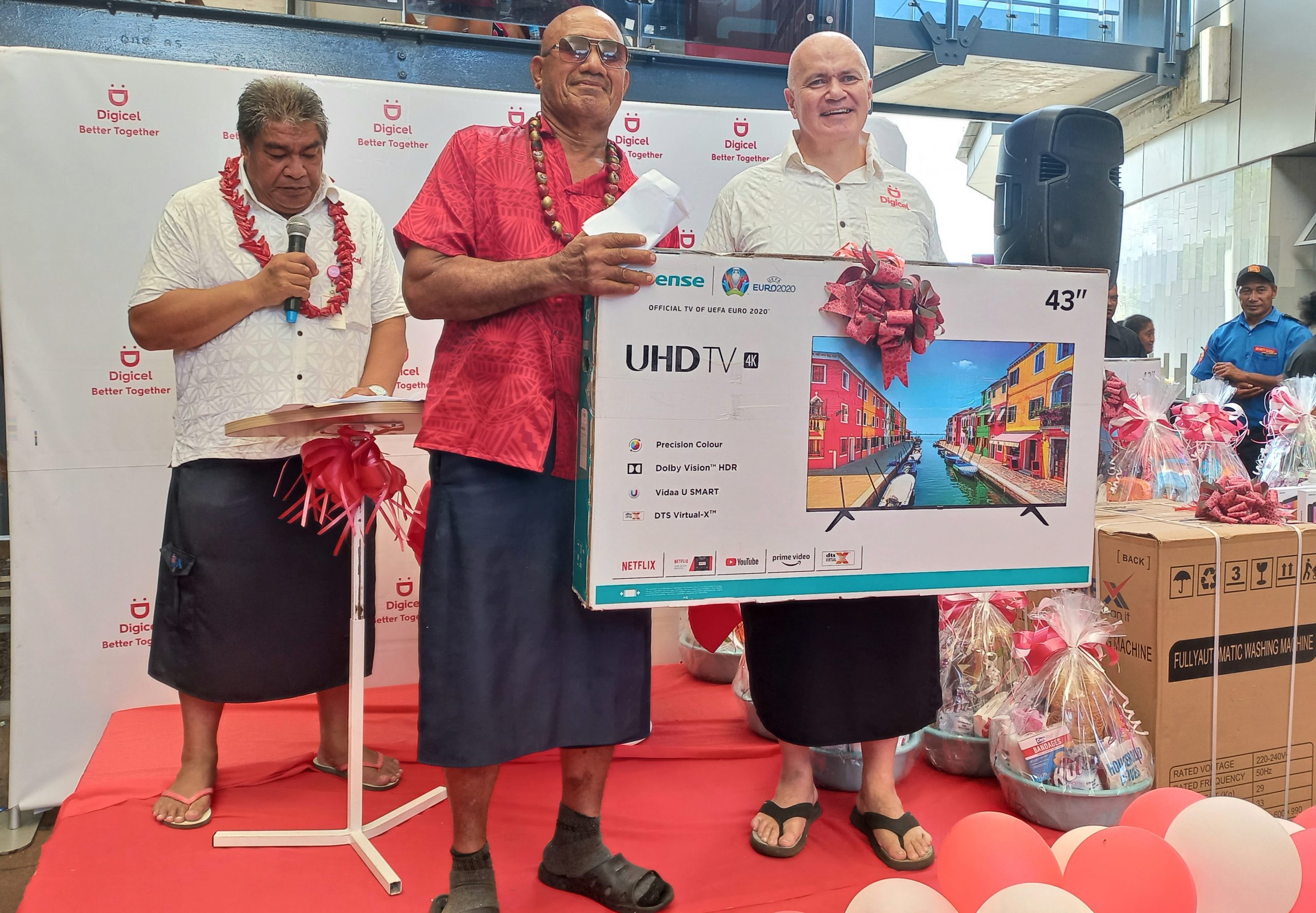 “This is a wonderful start to 2022,” said Tiresa, echoed by others who took home various prizes

“I praise God and acknowledge that all things are from Him, and He is the source of life and all strength.. I also thank the management and staff of Digicel for this blessing for our family,” said Mrs Mataafa.

“These are opportunities that families like ours would never ever have, to own a brand new car like this, but it is made possible through Digicel Samoa – thank you, faafetai tele lava”.

Tiresa and Samoa Mataafa have three adult children, who are all married with their own families.  She tells Samoa Global News that they have two family taxis run by her two sons for extra income. They also have the use of a car belonging to the church, and an old pick-up truck of their own.

Tiresa was lost for words, and said she did not expect to be the lucky winner of the long awaited Digicel promotion. “I did not think I would be driving this car home today,” she told Samoa Global News.

Mrs Mataafa says she would use the vehicle to further the work of the Lord. She said she participated in the Digicel promotion by topping up between $10 and $15 tala per week.

The Gift Your Aiga Pimped Ford Ranger promotion has been running for the past 10 weeks, with winners announced at the end of each week. The only requirement was for customers to top up $10 or more for a chance to win, and Thursday 13th January 2022, was the last day for this promotion.