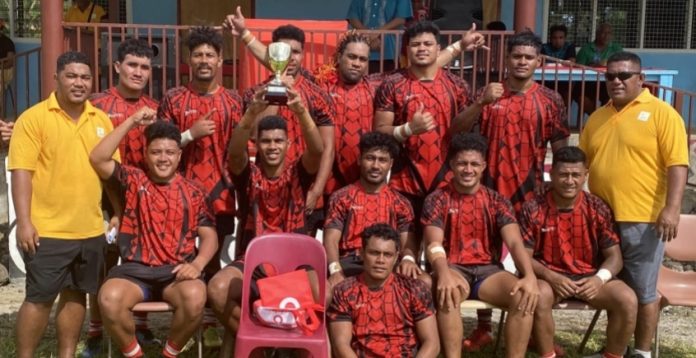 18 January 2021, Apia Samoa. While national trials for the Manu Samoa Sevens squad were being held at Apia Park last week, the pitonuu of Siumu Sisifo in the South Coast of Upolu was preparing for their inaugural Matāfala Siumu Sevens Series 2021 held last Saturday 16 January at Palalaua College Field, Siumu.
The hosts took out the first round win of what will be a three-week sevens series that they hope to host as annual event.
Matafala defeated Poutasi, Falealili 12-5 in a final that left supporters from both clubs at the edge of their seats. Especially as Poutasi represented the neighboring district of Falealili.
A spokesperson of the Matāfala club said they are hoping to attract some clubs from Apia this weekend Saturday 23rd and next weekend Saturday 30th January.
“We are hoping some top teams in Apia will participate. Registration is $200 for Round 2 and $300 for Round 3”.
It was a day of exciting rugby as captured by some great photography by Savai’imao’i Sports Photography.
“It was an amazing and exciting event, and we want to thank you sponsors Vodafone Samoa. We hope to continue this partnership with them into the
future…
“We also acknowledge and thank the Alii and matai of our pitonuu, Siumu Sisifo, for their advice and support”.
RESULTS
Runner’s Up was Poutasi, supported by the Poutasi Trust and captained by former Samoa Sevens player Murhpy Paulo.  Third place was taken by Saanapu-Tai, edging out Saanapu-Uta who finished fourth.
For further information, or to register your interest to participate or support grassroots rugby, please see the Matafala Rugby Club facebook page : https://www.facebook.com/Matafala/