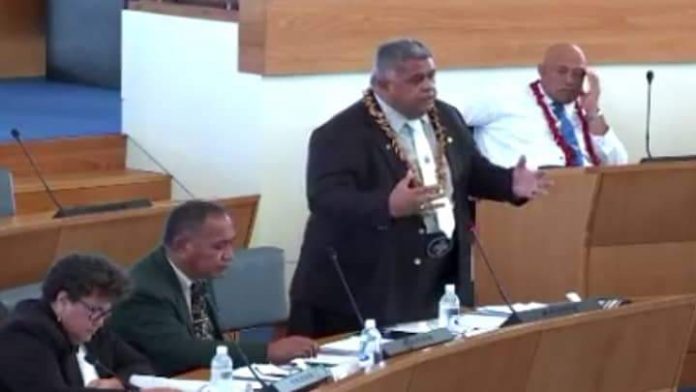 Former speaker and deputy speaker of the Samoan Parliament Laauli Leuatea Polataivao Schmidt said Samoa’s core family values have deteriorated and everyone should take responsibility for the measles crisis including Government who had failed to address long standing issues with ‘health’.

“There are also faults on our side that we have seen,” he said. “We should have sorted out health a long time ago, if it isn’t the hospital, it is doctors striking, or nurses strking..”

“So now we have come to an end that we don’t want to be in”.

The Member of Parliament for Gagaifomauga No. 3 was speaking in Parliament during general debates on the Infants Amendment Bill that will make vaccinations compulsory for all children of Samoa following a measles crisis that has shocked the nation and claimed the lives of 75 to date, most of them children under 4.

Laauli stressed during his Parliamentary address that a key contributing factor to the crisis was the decaying of Samoa’s core values, adding that the nation’s spiritual health was rotten.

Laauli referred to the amendment bill as the “Bill of Love”, saying the crisis should make all facets of Samoan society self-relfect and consider a level-up approach as Samoa moves into the future.

He said Church, Village Council and Parliament through the Government were no longer aligned and had to work more closely together.

“We have to reconcile and re-decide on what we need to do in order to move forward into the future.”

A Member of Parliament since 2006, Laauli said Samoa had lost it’s core family values and the word “love” seemed to be slipping away.

“What are we seeing in Samoa today?”

“There are 120 abandoned babies at Samoa Victim Support. La e tausi i utā. And a hundred more children are having to find places to stay because they are no longer safe in their own homes.”

“Men are killing their wives, and hanging them, using weapons, knives and guns.”

Laauli referred to recent cases before the Court where even Church Ministers were found sexually assaulting young members of the congregation.

He then turned to Parliament and Government saying they too had been negligent in carrying out their duties.

According to Laauli Parliament was over legislating but failing to act.

The Prime Minister stood to correct Laauli on this point saying that this is the first time Government has sought to legislate and the move catches those who are still fearful of vaccinations.