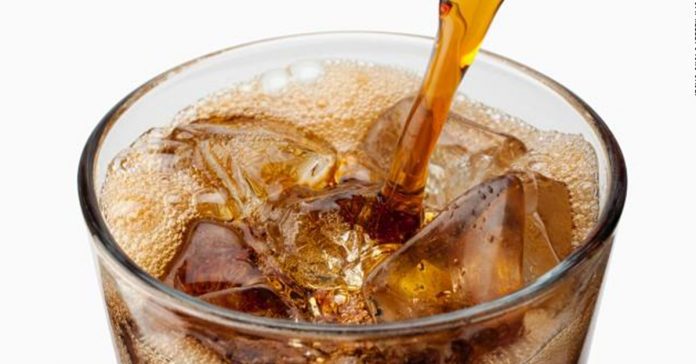 (CNN)More bad news for diet soda lovers: Drinking two or more of any kind of artificially sweetened drinks a day is linked to an increased risk of clot-based strokes, heart attacks and early death in women over 50, according to a new study by the American Heart Association and American Stroke Association.

The risks were highest for women with no history of heart disease or diabetes and women who were obese or African-American.
Previous research has shown a link between diet beverages and stroke, dementia, Type 2 diabetes, obesity and metabolic syndrome, which can lead to heart disease and diabetes.
“This is another confirmatory study showing a relationship between artificially sweetened beverages and vascular risks. While we cannot show causation, this is a yellow flag to pay attention to these findings,” said American Academy of Neurology President Dr. Ralph Sacco, who was not involved in the latest study.
“What is it about these diet drinks?” asked lead study author Yasmin Mossavar-Rahmani, an associate professor of clinical epidemiology and population health at the Albert Einstein College of Medicine in the Bronx, New York. “Is it something about the sweeteners? Are they doing something to our gut health and metabolism? These are questions we need answered.”

More than 80,000 postmenopausal US women participating in the Women’s Health Initiative, a long-term national study, were asked how often they drank one 12-fluid-ounce serving of diet beverage over the previous three months. Their health outcomes were tracked for an average of 11.9 years, Mossavar-Rahmani said.
“Previous studies have focused on the bigger picture of cardiovascular disease,” she said. “Our study focused on the most common type of stroke, ischemic stroke and its subtypes, one of which was small-vessel blockage. The other interesting thing about our study is that we looked at who is more vulnerable.”
After controlling for lifestyle factors, the study found that women who consumed two or more artificially sweetened beverages each day were 31% more likely to have a clot-based stroke, 29% more likely to have heart disease and 16% more likely to die from any causethan women who drank diet beverages less than once a week or not at all.
The analysis then looked at women with no history of heart disease and diabetes, which are key risk factors for stroke. The risks rose dramatically if those women were obese or African-American.
“Women who, at the onset of our study, didn’t have any heart disease or diabetes and were obese, were twice as likely to have a clot-based or ischemic stroke,” Mossavar-Rahmani said.
There was no such strokelinkage to women who were of normal weight or overweight. Overweight is defined as having a body mass index of 25 to 30, while obesity is over 30.
“African-American women without a previous history of heart or diabetes were about four times as likely to have a clot-based stroke,” Mossavar-Rahmani said, but that stroke risk didn’t apply to white women.
“In white women, the risks were different,” she said. “They were 1.3 times as likely to have coronary heart disease.”
The study also looked at various subtypes of ischemic stroke, which doctors use to determine treatment and medication choices. They found that small-artery occlusion, a common type of stroke caused by blockage of the smallest arteries inside the brain, was nearly 2½ times more common in women who had no heart disease or diabetes but were heavy consumers of diet drinks.
This result held true regardless of race or weight.

This study, as well as other research on the connection between diet beverages and vascular disease, is observational and cannot show cause and effect. That’s a major limitation, researchers say, as it’s impossible to determine whether the association is due to a specific artificial sweetener, a type of beverage or another hidden health issue.
“Postmenopausal women tend to have higher risk for vascular disease because they are lacking the protective effects of natural hormones,” North Carolina cardiologist Dr. Kevin Campbell said, which could contribute to increased risk for heart disease and stroke.
“This association may also be contributed to by rising blood pressure and sugars that were not yet diagnosed as hypertension or diabetes but warranted weight loss,” thus leading the women in the study to take up diet beverages, said Dr. Keri Peterson, medical advisor for the Calorie Control Council, an international association representing the low- and reduced-calorie food and beverage industry.
Yet, said Sacco, who is also chairman of neurology at the University of Miami’s Miller School of Medicine, the more studies there are coming up with the same associations, “the more you begin to question. The more you begin to feel strongly about the association being real.”
Critics also point to the possible benefit of artificially sweetened drinks for weight loss, a critical issue considering the epidemic of obesity in the United States and around the world.
For example, two World Health Organization meta-analyses of existing research on non-sugar sweetners called those studies “low-quality and “inconclusive,”said William Dermody Jr., vice president of media and public affairs for the American Beverage Association, a trade organization.
“Low- and no-calorie sweeteners have been deemed safe by regulatory bodies around the world,” Dermody said, “and there is a substantial body of research that shows these sweeteners are a useful tool for helping people reduce sugar consumption.
“We support the WHO’s call for people to reduce sugar in their diets, and we are doing our part by creating innovative beverages with less sugar or zero sugar, clear calorie labeling, responsible marketing practices and smaller package sizes.”

The American Heart Association issued an advisory last year saying that short term use of low-calorie and artificially sweetened drinks to replace sugary ones “may be an effective strategy” to promote weight loss in adults, but not children.
The guidance is aimed at those who “find it difficult to move directly from sugary drinks to water,” said University of Hawaii nutrition professor Rachel Johnson, chairwoman of the writing group for that scientific advisory. “Low-calorie sweetened drinks may be a useful tool to help people make this transition.”
On the whole, Johnson said, “there is solid science that consumption of sugary drinks is associated with adverse health outcomes. Thus, it may be prudent to limit intake until we know more about how they may impact people’s risk of stroke.”
While science continues to explore the connection, Americans are turning more and more to water and other non-calorie beverages, according to the Beverage Marketing Corporation, a data and consulting group. In 2016, bottled water surpassed carbonated soft drinks to become the number-one beverage by volume and has continued to dominate the market in 2017 and 2018.
In 2018, Americans are projected to drink just over 3 billion gallons of diet sodas out of a total of 12.2 billion gallons of carbonated sodas, according to data from the Beverage Marketing Corporation.
“Personally, I’ve stopped drinking artificiallysweetened beverages,” Sacco said, adding that he sees the emerging research as “an alert” for hard-core fans of diet drinks and anyone thinking of turning to them for weight loss.
“We should be drinking more water and natural beverages, such as unsweetened herbal teas,” Mossavar-Rahmani said. “We can’t just go all day drinking diet soda. Unlimited amounts are not harmless.”

Correction: A previous version of this story incorrectly quoted the risks for white women from Mossavar-Rahmani